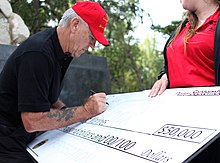 Ronald Lee Ermey (born March 24, 1944 in Emporia , Kansas - † April 15, 2018 in Santa Monica , California ) was an American actor and US Marine . The former military instructor was best known for the role of drill instructor Gunnery Sergeant Hartman in Full Metal Jacket .

Ermey was a member of the Marine Corps from 1961 to 1971 and took part in the Vietnam War, most recently as a staff sergeant . After he was retired due to an injury, he studied criminology and drama at the University of Manila . The American director Francis Ford Coppola became aware of him while preparing the war film Apocalypse Now and hired him as a military advisor . In the film itself he can be seen in a short excerpt as the pilot of the Eagle Thrust Seven helicopter .

In 2002, over thirty years after his retirement, he was awarded the honorary rank of Gunnery Sergeant . He was the first Marine out of service to receive a promotion.

Ermey served on the board of the National Rifle Association . 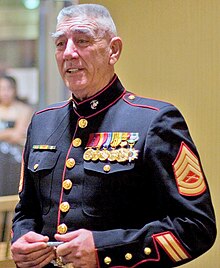 After a few more roles, he served again in 1987 as a technical consultant for the preparations for the film Full Metal Jacket . His task was originally to teach Tim Colceri , initially intended for the role of Gunnery Sergeant Hartman, the correct behavior and expression of a basic instructor in the US Marine Corps. For this purpose, Ermey had given the director Stanley Kubrick a 150-page notebook with collected words of abuse and humiliation from his active military service. Then, however, Kubrick saw a 15-minute film recording of Ermey, in which he insulted film recruits without interruptions or repetitions, even though he was thrown with oranges and tennis balls during the time. Kubrick was so impressed with Ermey's realistic portrayal of the drill instructor that he gave him the role. The role earned Ermey a Golden Globe nomination.

Over time, Ermey satirized the role of Gunnery Sergeant Hartman on television several times. So he gave Colonel Hapablap his voice in the Simpsons episode Sideshow Bob's last gleaming (season 7, episode 9) ; in the Pixar animated film Toy Story , he was the commander of the toy soldiers. In the pilot film for the Space 2063 series , the opening sequence of Full Metal Jacket is reproduced almost identically (also with Ermey), although at the end he acts more socially than in the original. He also appears in this role in Peter Jackson's The Frighteners ; however, here he commands the dead in the cemetery. Ermey also starred in films such as Mississippi Burning - The Root of Hate , On Burning Ice and Seven . In 1997 he played the role of Sheriff Buck Olmstead in the movie Switchback and in 2003 and 2006 the brutal Sheriff Hoyt in the horror remake Michael Bay's Texas Chainsaw Massacre and in the prequel Texas Chainsaw Massacre: The Beginning .

From 2006 Ermey presented the documentary series Mail Call, which has been running since 2002, on the US broadcaster History . In the program viewer questions about military technology and tactics are explained. At the same time, Ermey presented the television program Lock N 'Load with R. Lee Ermey on the History Channel from August 2009 .

Ermey died on April 15, 2018 of complications from pneumonia .