The Rendsburg high bridge is a steel structure built between 1911 and 1913 in Rendsburg ( Schleswig-Holstein ). It spans the Kiel Canal and serves as a railway bridge , also carries an attached transporter bridge for pedestrian and vehicular traffic. It is the landmark of the city of Rendsburg and one of the most important technical monuments in Germany . On September 22, 2013, it was recognized by the Federal Chamber of Engineers as a historical landmark of civil engineering in Germany . The Rendsburg ship greeting facility is located directly under the bridge . The bridge was the longest railway bridge in Germany for 99 years .

Originally the Kiel Canal (at that time Kaiser Wilhelm Canal) was spanned by swing bridges. In the course of the expansion of the canal from 1907, these were mostly replaced by high bridges.

When the first plans to build a railway bridge in Rendsburg became known, the citizens reacted rather skeptically. They feared "enormous steel structures" and a "monster" that would disturb the cityscape. The city's magistrate informed the Reich Office of the Interior that he “could not see the high bridge as an advantage for the city”. The planned increase in personal and freight tariffs due to the loop in the Rendsburg and Büdelsdorf business world due to feared sales losses also met with criticism.

Ultimately, the railway and sewer management gave way in many points and took over the additional costs of the project. Instead of a planned embankment, a viaduct was built to bring the tracks up to the high bridge. Compromises have been made with the tariffs by proposing a graduation in which the price increases only at distances of more than 100 kilometers.

As reported in the Rendsburger Wochenblatt on May 28, 1911, the Dortmund bridge-building institution CH Jucho and the Gutehoffnungshütte were considered . She already had experience building the high bridge in Holtenau .

construction of the bridge

The bridge was built by around 350 workers; The engineer Friedrich Voss was in charge . 17,740 tons of steel were put together with 3.2 million rivets "made from the best Siemens-Martin iron" .

Initially, the ramps were built on both sides of the canal as an earth dam and steel viaduct construction. Then the main bridge was built in a cantilever assembly.

Operation of the bridge

In order to defend the high bridge from possible enemy attacks during the Second World War , the Wehrmacht occupied it with soldiers and installed anti-aircraft guns on the south pylon and flak searchlights on the north pylon .

The railway line was electrified in 1995. For static reasons, initially only the eastern track was electrified, the western one was taken out of service.

From 1993 to 2014 this steel structure underwent a major overhaul and reinforcement. Steel parts for reinforcement were added and the corrosion protection completely renewed. The rivets were replaced by screw connections. The foundations of the entire bridge were reinforced. The high bridge and both ramp bridges were designed as single-track (22.5 t axle load and 8.0 t meter load) for route class D4 and double-track (22.5 t axle load and 6.4 t meter load). The high bridge on the important German-Scandinavian railway line can be used by heavier freight trains. During the entire construction period, only one track was available for rail traffic on the bridge. The work was completed on December 14, 2014 and the bridge is once again open to two tracks. The renovation was estimated at around 170 million euros.

End of the southern ramp, transition to the high bridge in Osterrönfeld, 2017

The Rendsburg high bridge measures 7.5 km together with its two access ramps. The actual steel bridge construction is 2486 m long, with the main bridge spanning the canal with a total length of 317 m with a clearance height of 42 m and a span of 140 m. The ramp bridges stand on a total of 51 rectangular scaffolding pillars. The access ramps have tight curve radii . Immediately behind the northern ramp is the Rendsburg train station . Initially it was planned to use the western track as a military roadway. The access ramps to the ends of the steel bridge still exist today.

The rails of the two tracks railroad tracks on the bridge are continuously welded. The track center distance is 3.5 m. Consisting of oak manufactured bridge beams are connected to the bridge via a welded centering. The starting and braking loads are transferred to the foundations through the pylons.

In the part of the Nordschleife designed as a dam there are four brick viaducts, which have also been under monument protection since 2014.

The bridge construction is maintained by the Kiel-Holtenau Waterways and Shipping Authority . The superstructure belongs to DB Netz .

There were two bridge houses on either side of the central section. The southern one was removed in 1981 and the northern one in 1989 due to dilapidation. Instead of the southern house, a viewing platform was built, which can be reached via a spiral staircase and which can be climbed on weekends with a guide.

Rail traffic over the bridge

Track field of the bridge from the north

The bridge is part of the Neumünster – Flensburg - Fredericia railway line and is therefore an important rail-bound route to Scandinavia on the Jutland line .

The Rendsburg station existed before the canal was built; it is only 600 meters from the canal bank. The clearance above the canal could not be reached directly from the Rendsburg train station. The approximately 4 1 ⁄ 2   km long ramp required for this was built as a route-lengthening Rendsburg loop around the loop district, which is enclosed by it and named after it, with a mean gradient of around 12 ‰. This technical solution, which is common in mountainous terrain (see e.g. the Brusio circular viaduct of the Bernina Railway in Switzerland), was used here for the first time on the plain.

On the southern side of the canal, the Osterrönfeld station at canal level was abandoned and a new station was built on the ramp to the bridge. In May 1962, the passenger traffic stop was set there.

Transporter bridge under the bridge

Transporter bridge over the canal 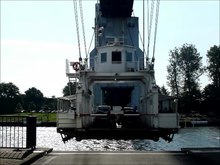 The transporter bridge connects the community Osterrönfeld with the city of Rendsburg and transported per trip up to four passenger cars and about 60 pedestrians. It takes just under two minutes for a crossing. The same timetable has been in place since it opened on December 2, 1913: from 5 a.m. to 11 p.m. (only until 10 p.m. in winter), every quarter of an hour. Since ship traffic has priority on the canal, there may be unscheduled waiting times. The transfer with the transporter bridge over the federal waterway is free of charge. In the mid-2010s, the transporter ferry transported an average of around 520 vehicles and 1,700 people per day.

The ferry platform (which is known as the gondola) is 14 meters long and 6 meters wide, has a dead weight of 45  tons and offers space for six cars and 60 pedestrians, the maximum load allowed is 7.5 tons. It hangs on twelve ropes under a steel structure that surrounds the lower chord of the bridge in a U-shape and runs with a total of eight wheels on two rails to the right and left of the bridge girder. The drive is electric with four motors that drive every second wheel.

It is one of only seven suspension ferries in operation worldwide. The transporter bridge, like the railway bridge, is a listed building.

The damaged ferry in February 2016

During a storm on the night of January 13, 1993, the transporter's brakes were released during the nightly break in operation, so that it rolled across the canal, driven by the wind, and collided with the Dutch coaster Linda Maraike . There was only minor property damage.

On January 8, 2016 at around 6:40 a.m., the ferry collided with the cargo ship Evert Prahm , injuring two people (the ferryman and the only passenger) and tearing two of twelve suspension cables. The ferry gondola was badly damaged. The ferry has since been out of service and was at the southern pier until March 18, 2016. From March 18, 2016, the transporter bridge was dismantled from the high-level railway bridge and brought to the building yard of the Waterways and Shipping Office. On June 28, 2016 it became known that the ferry could not be repaired and should be replaced by a new building. The tender for the new building was published on June 6, 2017. The new construction is to take place in two steps, first the suspension with the drive, then the ferry gondola. The construction time is assumed to be one and a half to two years. The order to build the new ferry was awarded to Hermann GmbH Maschinenbautechnologie in December 2018 . Individual parts of the ferry are built in Bavaria and assembled in Bremen. It will then be towed to Rendsburg on a pontoon . The new building should match the appearance of the old ferry gondola; it will cost around eleven million euros. Commissioning was initially planned for 2020. Construction began in April 2020 and is expected to go into operation in summer 2021.

The report of the Federal Bureau of Maritime Casualty Investigation was published on March 25, 2020 ; Like all reports from the BSU, it serves only to prevent future accidents and not to establish fault or liability. Among other things, the following statements are made:

The Rendsburg High Bridge is in the autobiographical narrative all dead fly high: America by Joachim Meyerhoff in connection with the feces, the decades from the open toilets of passenger cars decreased trickled to the located under the bridge plots mentioned. The situation did not change until the year 2000 as a result of the "faecal process" brought against Deutsche Bahn by a resident of the Hochdonn high bridge, which is also located on the Kiel Canal .