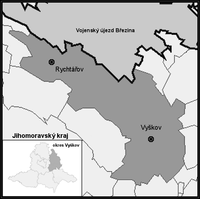 Rychtářov is located on the southern slope of the Drahaner Bergland on a ridge between the valleys of the Velká Haná and Malá Haná. The village is surrounded by extensive forests and lies in the basin of a small tributary to the Velká Haná. The Březina military training area extends to the north . To the north rises the Stržhlava (457 m), in the northeast the Holásková (466 m), Věsperk ( Wiesberg , 457 m) and the Srnčí vrch (539 m), to the east the Česlava (482 m) and in the northwest the Doubrava (528 m) ). To the north-west lies the medieval desert of Ovčinek and to the south the Opatovice dam .

The first written mention of Rechtarow was in 1381 in the Moravian land table . The first settlers were charcoal-burners and pitch-boilers, so it is assumed that the name of the place derives from Dehtář ( Pecher ) rather than Richter. However, it is also possible to establish it as part of the German colonization of the mountains. The village has always belonged to the Dědice manor since the 14th century. In 1538 the bishopric Olomouc acquired in the course of an exchange of goods against Paskov with Johann von Pernstein Dědice with the associated villages Opatovice, Rychtářov, Lhota and Raclavice. The bishops later united the Dědice estate with the Wischau dominion . In 1644 the village consisted of 47 houses, in 1755 there were 55. In 1764 the village was called Dehtářov . Other forms of the name were Dechtářov , Dechtaryow , Rěchtářov , Richtarzov , Richtersdorf and Rychtařov . Prince-Bishop von Troyer had a hunting lodge built west of the village green. The building, completed in 1755, was named Troyerstein. The first village school in Rychtářov was established in 1795. Until the middle of the 19th century, the village was always subject to the episcopal rule of Wischau.

The residents of Rychtářov left their village in March 1941

After the abolition of patrimonial Rychtařov formed from 1850 a community in the district administration Wischau. Between 1851 and 1852 a new rectory was built behind the church. In 1855 the village consisted of 69 houses. The old school turned out to be too small at the end of the 19th century, so that the community acquired a piece of land in 1894 and began building the new one. In the 1920s, the village began to expand, and the houses in the Rohlina settlement were also built during this period. In 1938 the community consisted of 152 houses. During the German occupation, Reich Protector Konstantin von Neurath ordered the expansion of the Wischau firing range into a large military training area for the Wehrmacht . To 33 for the construction of the training area Wischau to-clearing villages belonged in the first, to March 31, 1941 realized stage, even Richtersdorf . The 851 inhabitants were forcibly evacuated from the village's 176 houses. After the end of the Second World War, the shot-down town was repopulated from June 1945. Some of the houses had to be demolished. After the Březina military training area was established in 1951 , the forests north of the village had to be ceded to the military and became a restricted area. At the beginning of 1961 Rychtářov was merged with Lhota to form a municipality Rychtářov-Lhota . 1986 Rychtářov-Lhota was incorporated into Vyškov. In 1991 the village had 561 inhabitants. School classes in Rychtářov stopped in 2001. In the same year there were 172 houses and 572 inhabitants in Rychtářov.