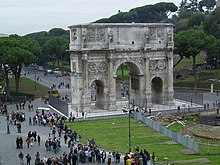 The Arch of Constantine for Constantine the Great in Rome. The quadriga and the other superstructures on top of the triumphal arch and thus the actual honor are missing today

A triumph ( Latin triumphus ; also triumphal procession ) in ancient Rome was the solemn entry of a victorious general , who had been proclaimed emperor by his soldiers , into the city of Rome . In a figurative sense, victory celebrations are referred to as triumph in a wide variety of contexts.

Significance and development of the triumphal procession

The honor was usually granted by the Senate when a general who fought under his own auspices had achieved a (in his representation) great victory and had been proclaimed ( acclaimed ) emperor by his soldiers on the battlefield . Victory (victoria iusta) had to have been achieved in a 'just' war ( bellum iustum ) and usually against external enemies. After predecessors at the end of the Roman Republic, Constantine the Great deviated from this for the first time when he triumphed over Maxentius at the end of 312 . An allegedly required number of at least 5,000 slain enemies is probably not historical. A triumph was only the top officials (the empire carriers , dictator , consul , praetor ) to, in the Empire then de facto only the emperor (or initially close relative). The triumph always marked a victory, not just a peace treaty.

Originally and in essence, the triumph was a predominantly sacred act: the general redeemed the vows that he had given to the gods, especially Jupiter Optimus Maximus , before the beginning of the campaign (voti solutio) , purifying himself and the army from the religious service Bad luck of the war and sacrificed to Jupiter on the Capitol. This also explains why only owner of an independent empire with auspicium were allowed to triumph, as only they could represent the community to the gods: only they were to take the right on behalf of the Roman people a vow that after the victory as part of Triumph was fulfilled by the sacrifice. Later the triumph developed more and more into a celebration of honor for the victorious general, but until 312 AD (before the Constantinian change ) the final sacrifice in the temple on the Capitol was the crowning end point of every triumph. With the sacrifice, the general (in republican times ) became a private man again, put on the toga and lost his empire .

The term "triumph" has no Latin root and, according to an ancient explanation, developed from ancient Greek through Etruscan mediation and originally referred to a celebration of honor for Bacchus , as a quote from Marcus Terentius Varros shows:

"[...] it is called 'Triumph' because the soldiers who return with their general are on their way through the city to the Capitol 'IO TRIUMPHS!' call, which probably comes from thriambos , the Greek epithet of Liber (= Bacchus). "

Another possible derivation, which does not necessarily contradict the first, is that of the Greek triambos "in three steps ". Those Greek authors who wrote about Rome usually translated triumphus with θρίαμβος (thriambos) , which was not only the epithet of Bacchus, but also early on the name for pageants.

It is a matter of dispute whether there were binding rules, what the requirements for the award of a triumph were. The significance of triumph in the political system of the Republican era is not entirely clear due to the scattered evidence of sources. On the one hand, authors like Cicero show that it was very unusual for a victorious general to forego a triumph; on the other hand, the triumph was a coveted, but not the only way to emphasize the reputation of a person and their family within the nobility , especially the grant Triumph always required negotiations with the Senate. Apparently it was above all Augustus who emphasized triumph as the highest form of honor within the political ruling class by compiling a list of triumphators, the Fasti triumphales , and by setting up statues of the most important figures of the republic in triumphal robes on his Augustus forum. At the same time, however, the first emperor ensured that this honor had been granted since 19 BC. Was actually only granted to members of the imperial family.

The course of a triumphal procession

Triumphator on the triumphal chariot, led by lictors (Archaeological Museum in Palestrina )

The course of a triumphal procession is only described by writers from the imperial era, who pretend to describe a certain triumph, but in fact rather represent an ideal image of a triumphal procession, which in the totality of all elements may rarely or even never be found in reality. Deviations from the following description cannot be ruled out and are even probable, especially for the Republican period.

A triumph was de iure the only occasion on which a Roman army was allowed to enter the city of Rome under arms. In order to be able to lead his men through the city, the triumphator had to be in possession of the imperium , the military command. Usually he automatically lost it the moment he entered town. Until the day of the triumph, the emperor had to camp with his legions outside the pomerium (the sacred city limits) while he negotiated with the senate about holding the triumph. If he crossed the pomerium beforehand without having received a special permit from the Senate, he and his empire would also lose the right to a triumph: this was the case, for example, in 60 BC. Chr. Gaius Iulius Caesar after his return from Hispania .

The triumphal procession led from the Field of Mars through the Porta triumphalis , the Forum Boarium , on through the Circus Maximus , via the Roman Forum to the Capitol , where the triumphator in front of the temple of Jupiter Optimus Maximus finally made a solemn sacrifice and thus redeemed the vow that was done before the start of a campaign. In research it is controversial whether the triumphator on the day of the triumphal procession is to be thought of as a king or as the embodiment of Jupiter. If the general, previously acclaimed as emperor by his troops , was denied a regular triumph or he was forced to cross the Pomerium beforehand, he could obviously move to the Albanerberg in front of the city instead of to the Capitol, but this was considered secondary.

The procession to the Capitol was lined with people who cheered the winner “ Io triump (h) e! “Celebrated. The senators, magistrates and hornblowers ( cornicines ) went ahead , then depictions of victory. On the train, marched out of the victorious troops and prisoners of war (prominent prisoners like Vercingetorix were after the triumph executed , the other in the slavery sold); Furthermore, the booty of war , decorated sacrificial animals and gifts of honor such as golden wreaths, the aurum coronarium , were presented to the Roman people for the general. The triumphant rode a quadriga at the end of the procession , lictors with laurel-wrapped bundles of rods ( fasces ) strode ahead of him; he himself was similar in his clothing to Jupiter or the Roman king (from the time before the republic).

The victorious army concluded. The soldiers had the opportunity to target the human weaknesses of their general in songs of praise and mockery ( ioci militares ) ; famous is z. B. a verse on Gaius Iulius Caesar , who as a young man already had relatively light hair and was said to have an excess of sensuality:

- Suetonius : Caes. 51 (Translation: "Townspeople, lock up the women! We bring the bald woos")

The triumphant wore a purple toga (toga purpurea) , an embroidered tunic (tunica palmata) , a laurel wreath ( corona triumphalis ) , in his left hand an ivory scepter with a golden eagle and in his right a branch of laurel. His face was, of following the example of the clay statue of Jupiter Optimus Maximus on the Capitol, with red lead red. The ornamentum triumphale is based on Jupiter on the one hand, and on the costume of the pre-republican king on the other.

A state slave, who was standing behind the triumphant on the chariot, held, it is said, the golden oak leaf crown ( corona Etrusca ) usually kept in the Jupiter temple over his head and warned him continuously: Respice post te, hominem te esse memento (“See around; remember that you are human too ”). The sentence is also transmitted in a slightly different form (see memento mori .)

The mostly provisional arches through which the train passed were sometimes made of permanent material ( triumphal arch ), especially during the imperial era. Then there was a festival for the army and the people.

The triumph in the imperial era

Treasures from the Jerusalem temple , including the menorah , are brought to Rome in a Roman triumphal procession after the siege and destruction of Jerusalem (70 AD) (original image on the inside of the Arch of Titus in Rome)

Augustus held 29 BC A triple triumph, but since the founding of the principate two years later he refrained from carrying out further pompae . A little later, the last triumphal procession of a senator who was not a member of the imperial house was held: Lucius Cornelius Balbus Minor received this honor in 19 BC. Granted on the occasion of a victory in North Africa. In the same year, Augustus' closest confidante, Marcus Vipsanius Agrippa, demonstratively refused to hold the triumph awarded to him by the Senate. When Tiberius triumphed in 12 AD, he had to publicly fall at Augustus' feet.

With Claudius , a reigning emperor triumphed for the first time in 44 AD, and since Titus only rulers have triumphed. The emperors were unwilling to concede the enormous prestige that came with triumph to anyone other than themselves. In addition, in most of the victories as the owner of the empire , the ruler was actually (formally) the commander - even if he was far away in Rome - while the actual general was legally a mere deputy ( legatus Augusti ) who fought under the auspices of the princeps and therefore, in the absence of an empire of its own, was not allowed to triumph anyway.

Victorious generals of the imperial era could receive the small subsidiary form of triumph, the ovatio , or were awarded the badge of a triumphant, the ornamenta triumphalia (most recently under Hadrian ). Between 29 BC When Octavian / Augustus triumphed on the occasion of the victory of the Battle of Actium (but formally the war had only been declared against the then foreign power of Egypt), and in 312 AD, when Constantine the Great celebrated his victory over Maxentius ( although allegedly renouncing the sacrifice on the Capitol), it was considered frowned upon to triumph over opponents of civil war. This attitude only changed in late antiquity .

In the course of the fourth century, however, triumph was increasingly supplanted by the adventus . One reason for this was probably the fact that the rulers of this time only stayed in Rome as an exception. In addition, brilliant victories over external enemies became rarer, and after Theodosius I , the emperors of late antiquity no longer went into battle personally. From the early 5th century on, there was another change in the ceremony: The triumphant emperors no longer took part in the pompa themselves , but from then on awaited the arrival of the triumphal procession in their box in the circus.

This variant of the ceremony was by no means forgotten in late late antiquity (5th and 6th centuries). Honorius triumphed twice, the victory celebration of the Emperor Anastasius in 498 has been prepared by contemporaries Priscian expressly interpreted as a triumph, and 534 were considered under Emperor Justinian a great triumph over the Vandals from where the victorious Master of the Soldiers Belisar walking through Konstantin Opel step and then threw himself at the Emperor's feet together with the captured Gelimer in the hippodrome . In 576 Tiberios I finally presented 24 elephants to the population of the capital in a "triumph" over the Sassanid Empire .