This article deals with the mountain in the Dolomites , the magazine for South Tyrolean regional studies named after it is “ Der Schlern ”.
fd2 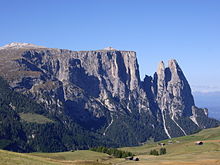 Schlern with Petz (left) and Postal (middle), and Santner and Euringer from the Seiser Alm seen from

The 2563  m high Schlern ( Italian Sciliar , Ladin Sciliër ) is a mountain in the South Tyrolean Dolomites in Italy . Despite its relatively low height, the stick-like western pillar of the Dolomites is due to its characteristic shape as a symbol of South Tyrol.

The mountain is the namesake of the surrounding mountain group, the Schlern group . The Sciliar itself has a plateau, the early pastoral use of which is attested by prehistoric finds, and towers over the Alpe di Siusi , the largest high pasture in Europe, as well as the low mountain range of the Sciliar area around Castelrotto and Völs . In 1974, the Sciliar and some adjacent areas were placed under protection in a nature park , which has been expanded to the Schlern-Rosengarten Nature Park since 2003 .

In the South Tyrolean world of legends , it is considered the home of the Sciliar witches . The regional journal Der Schlern , published since 1920, is named after the mountain.

Summit cross on the Petz

On August 22nd, 1885 , the Bozen section of the German and Austrian Alpine Club opened a refuge on the Sciliar , which in 1903 was combined with the adjoining inn to the Sciliar houses (today owned by the Club Alpino Italiano ). In 1969 the Bolzano section of the South Tyrol Alpine Club built the Schlernbödelehütte .

The mountain name attested in the 16th century as Schlernkhofl or on the Schalern is certainly of pre-German and pre-Roman origin.

One interpretation leads it back to the etym * sala with the meaning "brook, ditch, canal". During the medieval Germanization of the name, the basic form was combined with the suffix -en , the e of which fell out early in Bavarian, so that the sound Salérn was created ( Oswald von Wolkenstein still writes Saleren ). Due to the preservation of the pre-German accent , the first syllable finally shrank to Sl- , which led to the sound Schl- . Originally the name probably applied to the Schlerngraben and the Schlernbach; after them the mountain range was first called Schlernkofel (see the spelling from the 16th century), then Schlern .

Another theory postulates a connection with the Indo-European root * skel with the meaning "cut". The name Schlern therefore refers to the characteristic, vertically cut-off rock faces of the mountain range.

On the Schlern plateau

The Schlern massif consists mainly of sedimentary rocks from the Middle Triassic . The banked dolomites of the Rosengarten Formation and Rosszähne Formation were largely formed on slopes of a carbonate platform that were about 30 degrees steep , in the central platform area also as flat-lying sediments. Between the rose garden formation and the horse's tooth formation there are volcanic rocks that were formed in the Ladinium . These formations are overlaid by the Sciliar Plateau formation , which is formed by dolomite and limestone banks, among other things. The highest parts of the Schlern plateau are built up from rocks from the main dolomite of the Upper Triassic.

Panoramic view from the Petz, the summit of the Schlern