The city is located about 55 kilometers east of the capital Minsk and about 15 kilometers west of Barysau on the Plisa River .

Schodsina is one of the youngest cities in Belarus, which according to official information was founded in 1963, when the commercial vehicle manufacturer BelAZ started production there.

A settlement called Schodsina was founded in 1643 by Bogusław Radziwiłł (Belarus. Bahuslau Radsiwill ). It was first mentioned in 1688; thereafter the city was named Bahuslau Pole (= "Bahuslaus field"). The village on the Padschodsinka river, which was then part of the Minsk Voivodeship (the Polish aristocratic republic ), initially belonged to the noble family of the Radziwills before it went to Russia in 1793 as a result of the second partition of Poland. Since the construction of the Moscow - Brest railway line in 1871, the city has had its own train station.

Since 1924 the settlement has belonged to the Smaljawitschy district. In the course of the construction of several factories, Schodsina merged on January 21, 1958 with the villages of Saretschtscha and Kruschynki to form the settlement of the same name. The BelAZ plant was also founded in 1958. Schodsina has had city status since 1963.

A special place of interest in the city is the memorial for those who fell in the Great Patriotic War (1941–1945) . The monumental memorial depicts a mother, A. Kupryjanawa, and her five sons who all died in the war. One son was honored with the title "Hero of the Soviet Union".

To this day it is still controversial who is depicted on the coat of arms: the holy mother of God Mary or someone completely different (e.g. a kind of mother's commemoration or similar). The silver shield in the hands of the Mother of God with the three black trumpets depicted on it, diverging from the center to the edge of the shield, is the Polish noble coat of arms " Trąby " (trumpets), which many noble families of the Rzeczpospolita adopted, including the Radziwills.

The depiction of the Holy Mother of God refers to the widespread devotion to the Virgin Mary among Catholics. The representation of the Mother of God can also be found in other Belarusian coats of arms, such as B. in the city ​​arms of Minsk . 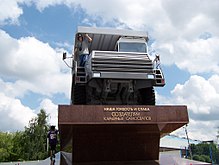 In front of the entrance gate to the BelAZ plant: a memorial with a dump truck from the manufacturer

The commercial vehicle manufacturer Belaruski Autamabilny Sawod (BelAZ for short) is the city's largest employer. In total, more than 11,000 people, almost one sixth of the total population of Shodsina, work in the BelAZ plants. The trucks, which weigh up to 250 tons, are sold all over the world.

This company has attracted large numbers of workers from the region since the 1960s. It is thus comparable with cities that arose out of economic needs in earlier socialist states, such as Nawapolazk (Belarus), but also with the planned town of Eisenhüttenstadt, which was only founded in 1950 in the former GDR .

Another important employer is the textile manufacturer " Switanak ", which produces children's and adult clothing. The products are exported across Europe.

In addition to the automotive and light industries, the city is also home to the metal and wood processing, food and construction industries.

Since the 1990s, more and more Shodsina residents have been drawn to the capital Minsk to work. Many Minsk citizens are looking for an apartment in Schodsina "in return", which has led to the fact that the prices for apartments in the small town continue to rise.

The city is located directly on the Berlin - Warsaw - Minsk - Orscha - Moscow railway line and on the M1 or European route 30 , one of the country's main arteries that connects Minsk with Moscow. In the city there is a central bus station with bus connections to Minsk, Baryssau and other surrounding cities as well as a main train station and the Schodsina-Süd train station.

The former house of the Kupryjanau family now functions as a museum, in which the family's everyday objects from the pre-war and wartime periods are exhibited.

There are also two Orthodox churches in Schodsina, the Church of Our Lady Mary and the Mikhail Church, as well as a Catholic one, which is dedicated to Mary of Fátima .

In Schodsina there are nine schools, two grammar schools, a lyceum with a vocational focus and a polytechnic technical center (a kind of vocational school).

The Torpedo Schodsina football club , which plays in the top division of Belarusian football, in the Vysheyschaya Liha , is based in the village . The main sponsor of the association is BelAZ. Until 1992 the club was also called BelAZ Schodsina . The home games are played in the multi-purpose stadium Torpedo Stadium , which has a capacity of 3020 spectators.