The silver grass ( Corynephorus canescens ) is a species of the genus Corynephorus within the sweet grass family (Poaceae). 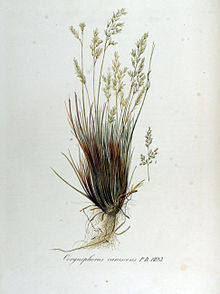 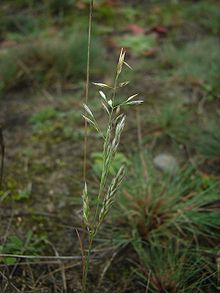 The silver grass is a wintering green, perennial herbaceous plant and reaches heights of 10 to 35 centimeters. This grass grows in dense clumps . The upright, slightly splayed stalks are noticeably thin, hairless, slightly roughened and have two to seven knots below the middle .

The leaf sheaths are reddish purple, slightly rough and hairless. The silvery gray-green leaf blades are very stiff, rolled up like bristles, sharply pointed, rough and about 6 centimeters long and about 0.5 millimeters wide.

The flowering period extends from June to August, occasionally into October. The finely branched, panicle inflorescence is 2 to 8 centimeters long, narrow-elongated and purple or brightly colored, sometimes also pale green. The inflorescence is loosely spread out only during the anthesis , otherwise it is contracted. The 4 millimeter long spikelets are two-flowered, very narrow and slightly compressed. The lemmas are almost completely enclosed by the glumes . They are indistinctly annoyed and have a light brown awn that is already free at the bottom . The awn is characteristic thickened club-shaped and has a bristle ring of hair about in the middle.

The silver grass is an intensive root and can penetrate up to 15 centimeters into the ground. Because of this property, it is suitable for initial grassing of loose sand and plays a decisive role in defining shifting dunes. It also reaches deep water reserves even in severe drought. Further morphological properties are especially developed for living in dry and warm habitats . The surfaces of the roots are enlarged by the velvety hair. This enables the plant to absorb enough water. Furthermore, the rigid, upright stalks of the clumps function to a certain extent like dew and rain collectors and direct water to the roots. Finally, the rolled leaves limit water loss through evaporation by concealing the stomata . The silver grass can withstand up to 60 ° C in summer  , but dies in severe frost. The silver grass grows extremely slowly and is not even eaten by sheep because its nutrient content is so low.

Pioneer settlement of a sand road

When it is dry, the lemma and glume curve in or spread apart, while when it is wet, the hygroscopic hairs and awns stretch . As a result, it self-spreads as a soil creeper and borehole. The caryopsis can also be spread as a Velcro fruit, for example in the fur of sheep. 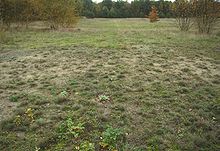 Habitat in the Lieberoser desert

The silver grass is widespread from southern Scandinavia through northwestern Europe to the Mediterranean area . It is a sub-Atlantic - sub-Mediterranean floral element . In contrast, it is very rare in inland areas further away from the coast . It is missing in the Alps and in higher low mountain ranges . It also occurs in Morocco . In the New World it is a neophyte .

The silver grass grows on warm and dry, nutrient and base poor, neutral to acidic, mostly poor in humus and fine earth , loose, permeable sandy soils of the lower elevations. As the first settlers, it occurs on drifting sands of the coastal and inland dunes , drifting sand covers, on fallow land , on paths, sand pits , open pine and birch forests . On open sandy areas, where the soil dries out extremely in summer, it is often the only stand-forming flowering plant . It is a pioneer plant on open, low-vegetation, loose, humus-free drifting sand fields . It is adapted to the extreme environmental conditions of its natural locations (heat, drought, lack of nutrients). The plant, with its small, tufted clumps, is a characteristic of the silver grass corridors (Corynephorion canescentis). The silver grass is used for the initial grassing of loose sand and plays a decisive role in defining shifting dunes .

Its main occurrence is in sand dry grasslands . Here it is the character type of the association of the silver grass fields or silver grass pioneer lawns (Corynephorion canescentis). The plant communities are composed of indicators of leanness and drought . In addition to silver grass, these are the sand ostrich grass ( Agrostis vinealis ), the narrow-leaved dock ( Rumex tenuifolius ), the spring spark ( Spergularia morisonii ) and farm mustard ( Teesdalia nudicaulis ). The purple-stemmed horn-tooth moss ( Ceratodon purpureus ) and women's hair moss ( Polytrichum piliferum ) can be found on mosses . A large number of lichens are characteristic, such as the elk antler cup lichen ( Cladonia alcicornis ) or Floerkes cup lichen ( Cladonia floerceana ).

The silver grass is not considered endangered in Germany . However, it is classified as endangered in the federal states of Hesse , North Rhine-Westphalia , Rhineland-Palatinate , Saarland , Baden-Württemberg , Bavaria, and Hamburg . In Thuringia , the species is considered threatened with extinction. In Austria , silver grass is also threatened with extinction. Due to the destruction of most of the poor sand areas in the past few decades, the habitat of the silver grass has largely been lost. The currently remaining small-scale locations are particularly threatened by nitrogen input from neighboring agricultural areas .

The German common name Silbergras refers to the inflorescences, which are shiny silver in the light.