The acid constant K S is a material constant and provides information about the extent to which a material reacts in an equilibrium reaction with water with protolysis :

HA stands for a Brønsted acid (after Johannes Nicolaus Brønsted ), which can give off a proton H + to a solvent such as water, leaving an anion A - behind. More generally, Brønsted's definition also applies to non-aqueous systems, here applies to any protonatable solvent Y :

K S is the equilibrium constant of this reaction multiplied by [Y] and thus a measure of the strength of an acid . The stronger the acid, the more the reaction is shifted to the right; d. i.e., the higher the concentrations of HY + and A - . The equilibrium constant is usually as their negative decadic logarithm , the p K S specified value (also p K a , of Engl. Acid = acid). This means: the smaller the p K S value, the stronger the acid.

Derivation of the acid constant

wherein the universal gas constant , the temperature and the Euler number is. The formula also describes the observable temperature dependence of the acid constant.

is defined as the product of the activities and is a dimensionless quantity. If mixing effects are neglected, the following applies . This is possible without major errors in solutions up to 1 mmol / l. Constants can therefore be set up with the activities as well as with the concentrations. However, they have a different numerical value. Due to the historical development of chemistry from a practical science, the concentration-related constants are usually given, as these were found experimentally before the thermodynamic justification.

The property of a certain substance to react as an acid is inextricably linked with its potential ability to transfer a proton (H + ) to a reaction partner . Such a reaction is called protolysis . The strength of an acid describes the extent of this ability . However, this depends on the ability of a reaction partner to take up the proton. If the acid strength of different acids is to be compared, it makes sense to consider the interaction with a standard reaction partner. This is usually water , which is also the most important compound and solvent in many processes in nature. The reaction equation of an acid HA in and with water can be represented as follows:

An equilibrium is quickly established in this reaction. In addition to HA, H 3 O + also has the ability to transfer a proton to a reaction partner: They are both acids . H 2 O and A - , on the other hand , have the ability to take up a proton, which is why they are both called bases . If you mentally separate the standard reactants water and H 3 O + , HA and A - remain. Since the concentrations of these components are bound to an equilibrium, the extent to which HA is able to be an acid is coupled to the extent to which A - is able to be a base. For example, if HA has a great potential to donate a proton and A - a small potential to accept a proton, HA is called a strong acid. The balance (1) would be on the right. If the acid HA has a high potential to donate a proton (i.e. a low p K S value), then its corresponding base A - has a potential that is low (i.e. a high p K B value) to accept a proton . For water z. E.g. p K B + p K S = p K W = 14

The acid constant (or the p K S value) is a measure of the strength of an acid. The acidity is greater, the lower its p K S value. The p K S value is numerically equal to the pH value of a solution if HA and A - are present in the same concentration according to equilibrium (1).

In aqueous solutions, very strong acids and very strong bases protolyze completely to H 3 O + or OH - ions. The different acid strengths of hydrogen chloride and perchloric acid in water can no longer be distinguished on the basis of the pH value . Here one speaks of the leveling effect (from French : niveler = equalize) of the water. In order to be able to distinguish even very strong acids with regard to acid strength, equilibrium constants are determined in non-aqueous solutions and these are approximately transferred to the solvent water.

The standard reaction partner water has the special property of being able to react as acid and base:

This so-called autoprotolysis allows the determination of the extent of the ability of a base to take over a proton from water and is explained in more detail under base constant .

Causes of the different acid strengths

The acidity of a molecule can be estimated based on various factors.

The stronger an acid or the easier it gives off a proton,

Between an acid HA and its Base A - is in aqueous solution, the following equilibrium reaction steps:

Since the concentration of water ( c (H 2 O)) in the reaction remains practically constant, can be c (H 2 O) in the constant  K include. This finally gives the acid constant  K S with the unit mol / l:

The negative decadic logarithm of K S , the so-called p K S value , is often given:

There is accordingly a base constant (p K B value). The smaller the p K B value, the stronger the tendency of the base to take up protons. The p K S value can be converted to the base constant of the corresponding base:

Acid and base constants are temperature dependent. As a rule, the constants are determined at temperatures in the range from 23 to 25 degrees Celsius. In this range, the ion product of the water is sufficiently accurate 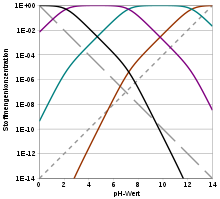 In the case of a multi-protonic acid, protolysis occurs gradually. There is a separate acid constant or p K S value for each protolysis stage . For the individual protolysis steps, the following generally applies: K S 1  > K S 2  > K S 3 (or p K S 1  <p K S 2  <p K S 3 ), since the further protolysis is less due to the increasing ionic charge of the residual acid anion formed is energetically favored.

An example applies to phosphoric acid :

Concentrated sulfuric acid is used as an electrolyte in lead batteries . Free sulfate ions no longer exist under these equilibrium conditions.

There are no more sulfate ions below pH 0

The p K S values ​​of acids with values ​​in the range from 4 to about 10 can be determined via acid-base titrations and the determination of the pH value at the half-equivalence point . Here the acid and its corresponding base are present in the same concentration. At this point, it follows from the Henderson-Hasselbalch equation : pH = p K S .

In the case of organic acids , three structural properties determine the acid strength:

Some substituents have both mesomeric and inductive effects, such as the halogens or nitro groups. Halogens have a strong –I- but a weak + M effect; the nitro group has both an electron attracting effect (–I effect) and an –M effect, i. H. both effects work in the same direction.

p K S and p K B values ​​of some compounds

The following table lists p K S and p K B values ​​of some acids and bases under standard conditions: