Targa is a redirect to this article. Further meanings are listed under Targa (disambiguation) .

A Targa roof is a car roof with a removable roof center section. In contrast to a convertible , the rear window is permanently installed.

The name Targa is a trademark registered by Porsche for car models . The term is also used as a generic name for cars from other manufacturers of this type.

With the Targa roof, the middle part of the roof between the windshield frame and the connection between the B-pillars of a motor vehicle can be completely removed. At Porsche, this design principle was introduced in the 911 series from 1965.

However, as early as 1961, an additionally available two-piece hardtop turned the classic English roadster Triumph TR4 into a coupé. It was called "Surrey Top" by Triumph; it consisted of a firmly screwed panoramic rear window and an optionally exchangeable fixed metal or convertible top middle part. Porsche also took up this idea in 1965 and implemented it with the aforementioned Porsche 911 Targa. 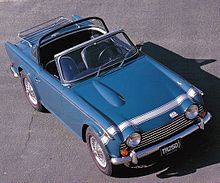 Some manufacturers leave a web between the windshield frame and the connected B-pillars so that both roof halves can be removed individually or together. This construction is called "T-tops" or "Top-T" and was used, for example, in the Chevrolet Camaro (1993 –2002) installed. This is mostly due to the design in order to achieve the necessary rigidity of the chassis.

Sometimes only a so-called targa bar remains, which corresponds to the connected B-pillars, so that another careless part is created. The targa bar should not be confused with automatically extending roll bars, which were installed in the Mercedes SL for the first time since 1989 .

Porsche no longer offered a removable roof for the Porsche 993 , Porsche 996 and Porsche 997 types , but a large sliding glass roof up to the C-pillar that can be opened into one another.

Sports cars are basically offered as a 2 or 2 + 2-seater with this construction principle as standard. There are also occasional off-road vehicles and individual conversions of other vehicle types.

The nature of the roof part that has been removed is different; a distinction is made between fixed, collapsible, metal and glass roof parts.

The term Targa from Italian means “shield” in German. The use of the term by Porsche goes back to their own victories in the Targa Florio endurance race. 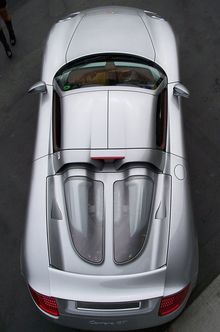 Models with a targa roof reached their peak in the 1980s and 1990s. At the moment they seem to be being replaced by full convertibles with classic fabric tops or with folding steel roofs.

The basic principle of the Targa roof has been largely shaped by American, German, Italian and Japanese manufacturers since the late 1960s. The following models should be mentioned in particular:

Currently, only the following models are offered as targa versions: