This article deals with the German spaceman. For other people with a similar name, see also Walter Ulrich and Walter Ullrich .

Ulrich Hans Walter (born February 9, 1954 in Iserlohn ) is a German physicist , former science astronaut and science journalist and moderator . Since 2003 he has held the chair for space technology at the Technical University of Munich .

Walter grew up in Iserlohn in the Sauerland . After four years of elementary school, he moved to the Märkisches Gymnasium in Iserlohn in 1964 . He successfully passed the Abitur examination in 1972 and then volunteered for military service . The last twelve months of his two years with the German Armed Forces were an instructor at the Army Air Defense School in Rendsburg ( Schleswig-Holstein ). He retired with the rank of lieutenant in the reserve.

In 1974 Walter began to study physics at the University of Cologne . After four semesters, he passed the intermediate diploma and finished his studies in experimental physics (specialization in solid state physics ) in 1980 . While he then worked as a research assistant with Dieter Wohlleben at the II. Physics Institute at the University of Cologne, he worked on his doctoral thesis (" Neutron Scattering on Intervalent Systems"). He received his PhD in 1985.

With the support of scholarships, Walter completed a two-year research stay in the United States to deepen his knowledge of solid-state physics. In the first year he was at the Materials Science and Technology Division of the Argonne National Laboratory , near Chicago ( Illinois hired). He then did research at the University of California at Berkeley until the summer of 1987 .

In August 1986, what was then the German Research and Research Institute for Aerospace (DFVLR) - the predecessor of today's German Aerospace Center  - on behalf of the Federal Ministry of Research published a list of scientific astronauts in all major daily newspapers for the second German Spacelab flight (D -2) wanted. A university degree in physics, chemistry, biology, medicine or engineering as well as several years of research was required. In addition, a doctorate in the areas mentioned was an advantage. A good general mental and physical condition as well as excellent knowledge of English combined with an age limit of 35 years were required.

1,799 national interested parties responded to the call, but only 40 percent of them met the required criteria. 312 applicants were shortlisted, of which 13 people (nine men and four women) remained after medical surveys (for hereditary diseases, allergies or ametropia), various knowledge and psychological tests and subsequent health tests (balance, circulation). A jury, which also included the three old astronauts Ulf Merbold , Reinhard Furrer and Ernst Messerschmid , finally selected the five candidates.

The then Research Minister Heinz Riesenhuber presented the five finalists to the public in August 1987. In addition to Walter, the teacher and meteorologist Renate Brümmer , the doctor Heike Walpot and the physicists Gerhard Thiele and Hans Schlegel strengthened the German astronaut corps .

The five space flight aspirants began in March 1988 at the DFVLR headquarters in Cologne with the actual astronaut training (the first “trial courses” had already been held beforehand, the group undertook its first parabolic flights in the USA at the end of 1987 ). In 1990, with the exception of Walpot, all of them were shortlisted as payload specialists for the second German Spacelab flight ( D-2 ). Since then, the four Germans have trained alternately in Cologne and in Huntsville at the Marshall Space Center and the Johnson Space Center in Houston . A year before the flight, the final choice fell on Walter and Schlegel. Walter's astronaut training cost 400,000 marks. During that time, his annual salary was 90,000 marks.

At the end of April 1993, the two German physicists and five US astronauts set off for Earth orbit aboard orbiter Columbia . Schlegel and Walter supervised around 90 experiments during the ten-day flight, most of them from the fields of biology and materials science. They worked in the European space laboratory Spacelab, which flew for the seventh time in the hold of a US space shuttle.

After the space flight 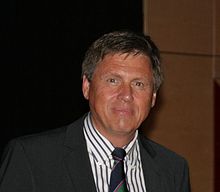 Walter during his lecture around the world in 90 minutes

After his flight, Walter left the German astronaut squad and headed the DLR satellite image archive in Oberpfaffenhofen, Bavaria , for four years . There he set up a German headquarters for satellite images in order to make them available to the general public. From 1998 he was Program Manager at IBM Germany and worked on digital media solutions, later he was a technical consultant in the development laboratory in Böblingen . Since March 2003 he has held the chair for space technology at the Technical University of Munich .

Walter has published more than sixty papers on space and space travel. He regularly writes columns and articles for magazines and between 1998 and 2003 he moderated the bi-weekly science program "MaxQ - Lust auf Wissen" on Bavarian television . For Welt he writes the column Knowledge creates something .

Walter is president of the Hermann Oberth Museum in Feucht, member of the board of trustees of the Deutsches Museum in Munich and of the science and technology center "x-world" in Freiburg . He has been awarded the Federal Cross of Merit, First Class and the Wernher von Braun Medal. He is also the school sponsor and namesake of the Ulrich Walter School, a private science and technology school in Stuttgart-Mitte.

Walter received an honorary doctorate from the National Technical University of Ukraine "Igor Sikorski" in 2012 and an honorary professorship from the Dragomanov National Pedagogical University, Ukraine. Since 2018 he has been a Consultant Professor at Northwestern Polytechnical University in Xi'an, China. He is a member of the scientific advisory board of the Giordano Bruno Foundation, which is critical of religion, and of the board of trustees of the Deutsches Museum .

Walter describes himself as a “convinced religious Christian ” and considers this religion to be a “network” and “set of rules” that hold people together as meaningful and necessary; However , he does not share the idea of ​​a life after death and of God as an overpowering being who observes everything: "Everyone has to deal with that for himself."

Ulrich Walter is married, has two daughters and lives near Munich .

He is also a radio amateur with the callsign DG1KIM.