Company headquarters and depot in Mainz 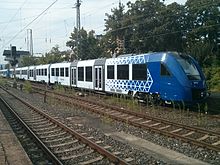 The Alsace Express from vlexx in Wissembourg

The vlexx GmbH is a railway company based in Mainz and a subsidiary of Regentalbahn which through the parent company in turn since 2011 Netinera the Italian state railway Ferrovie dello Stato belongs. Vlexx operates local rail passenger transport in Rhineland-Palatinate , Saarland and Hesse as well as a connection to Alsace on the railway line from Winden to Wissembourg station .

The company name was "DNSW" when it was founded in 2012 and was derived from the route network, the "Diesel Network Southwest", whose cornerstones are the Rhineland-Palatinate cities of Mainz, Koblenz , Worms , Kaiserslautern and Idar-Oberstein as well as Saarbrücken in Saarland and Frankfurt am Main in Hesse are. At the weekend in the summer season there is also a pair of trains to Wissembourg in Alsace .

From the beginning, the name DNSW was only intended as a temporary solution. In a naming competition in January 2014, the public could take part in finding a name. A suitable name was sought to underline the company's regional connection. The choice fell on vlexx, the four-country express .

Tendering of the diesel network

At the end of February 2012, the Regentalbahn was chosen by the regional rail passenger transport association Rhineland-Palatinate South as the winner of the tender "Diesel Network Southwest - Lot 2" . Since the regular timetable change 2014/2015 on 14 December 2014, the company operates in order for 22.5 years until June 2037 trains on the lines Mainz-Alzey - Kirchheimbolanden , Frankfurt-Mainz - Bad Kreuznach Idar-Oberstein-Saarbrücken ( Regional Express ), Mainz – Bad Kreuznach– Kaiserslautern (a regional express train pair in the weekday rush hour ) and Mainz – Idar-Oberstein– Baumholder / Neubrücke . Since December 2014, the company's services have thus covered 6.1 million train kilometers per year. In addition, another Regional Express line was introduced on the Kaiserslautern - Bad Kreuznach - Bingen - Koblenz route in December 2016 , which means that 6.4 million train kilometers per year can now be covered. The diesel power Southwest includes non-electrified main and branch lines in Rhineland-Palatinate and connects in rail transport , in particular the regions of Rheinhessen , Nahe , the West Palatinate and Saarland with the Rhine-Main area and the centers of Mainz, Rüsselsheim am Main and Frankfurt, as well as the Frankfurt airport .

The train services are a total of 63 diesel railcars the type LINT 54 and LINT 81 down. In the meantime, the Regentalbahn founded a subsidiary with DNSW, to which the provision of the traffic was transferred. The DNSW was later renamed vlexx as part of a competition. The first new vlexx trains have been running on the future operating routes since July 2014.

Problems with taking over operations in the diesel network

On November 27, 2014 it became known that vlexx did not have enough train drivers to operate all train services at the 2014/2015 timetable change. The former operator of the route, DB Regio , was therefore commissioned by vlexx to operate individual train services.

When operations were taken over on December 15, there were massive train cancellations and sometimes hours of delays. As a result, an emergency timetable was published on December 17th, with which only around 50% of all train services were served. In addition, the managing directors were recalled and replaced by Arnulf Schuchmann, who is managing director of ODEG , partly also belonging to the Netinera group. On January 6, 2015, the emergency timetable was gradually expanded so that around 90% of all train services could be operated again from January 12. Since the beginning of March 2015, all contractually agreed connections have been served. This includes in particular the reactivated route between Heimbach and Baumholder , which was only served by a replacement bus.

After Vlexx took over the last service from DB Regio on July 1, 2015 with a six-month delay (RE Bodenheim – Kaiserslautern), there were again train cancellations due to a lack of staff. This affected five connections that were taken over by DB Regio and Transregio during the Rhineland-Palatinate summer vacation or that failed completely.

Invitation to tender from the E-Netz Saar

On January 9, 2017, the task authority MWAEV announced that vlexx had won Lot 2 of the Saar-RB E-Netz, which comprises 2.3 million train kilometers . The RB lines Saarbrücken – Neubrücke, Saarbrücken – Neunkirchen (Saar) –Homburg and Homburg – Illingen are then operated. These are to be served by 21 Talent 3 electric multiple units. However, due to the delay in delivery of the Talent 3 vehicles by the vehicle manufacturer, used electric vehicles of the type 425/426 are being rented from the transport authority. The lot also includes the currently unelectrified line from Saarbrücken to Lebach-Jabach. This is to be operated initially with diesel multiple units of the Desiro Classic type , electrification was planned for the year 2024, from then on the electric multiple units of the Talent 3 type should also operate there. As an alternative, the use of a battery-electric multiple unit based on the Talent 3 is planned.

Problems with taking over operations in the E-Netz

Problems also arose with the takeover of operations in the E-Netz. In the run-up to the takeover, it was announced that due to delivery problems, the old vehicles of the 425 and 426 series previously used by the DB would be rented and used from Saarland until the vehicles ordered were fully available.

Due to the lack of staff and the training on the rented vehicles, a number of trips that were actually planned were deleted from the timetable with the takeover. In addition, there were repeated calls to be made in operation due to a lack of staff. From February 1, 2020, Deutsche Bahn will again take over services to ensure regular operation.

The clients and contractual partners of Vlexx for these services are:

Since 2017, vlexx has been offering the excursion portal "vlexx und los", which offers a wide range of excursion destinations in the Rhine-Main region. The line offered by vlexx is also displayed for each leisure destination. Events and timetables have also been published on this Internet portal since 2018 .