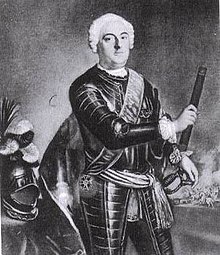 Wilhelm Gustav Hereditary Prince of Anhalt-Dessau (born June 20, 1699 in Dessau , † December 16, 1737 ibid) from the house of the Ascanians was a Prussian lieutenant general .

Wilhelm Gustav was the first of ten children of Prince Leopold I of Anhalt-Dessau and his wife Anna Luise Föhse . In 1706 he received his patent as a cavalryman and in 1712 accompanied his father in the campaign against France . In 1713 he received a company in the Gens d'armes regiment of the Prussian army . In 1715 he received the regiment on horseback "von Pannewitz" , but after a few days he exchanged this for the du Portailsche regiment on horseback . In 1719 he took part in the Turkish War in Hungary. In the same year he was awarded the Order of the Black Eagle . In 1734 and 1735 he was under Prince Eugen Volontair in the war against France. Wilhelm Gustav died of smallpox in 1737.

Wilhelm Gustav was the actual heir to the throne, but died ten years before his father. He secretly married the commoner Johanne Sophie Herre (1706–1795) in a night action in 1726 . This morganatic marriage was officially concealed at first. The children who sprang from this marriage were passed over in the succession so that the reign later fell to his brother Leopold Maximilian . Only after his death in 1737 did the widow, all three daughters and six sons receive the title of Count or Countess of Anhalt. Two other illegitimate sons were raised to the nobility by the Prussian King Friedrich II under the name "von Anhalt".

The following illegitimate children resulted from his relationship with Henriette Marianne Schardius, daughter of the Superintendent of Dessau: