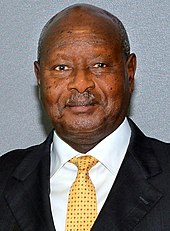 Museveni belongs to the Hima ethnic group , was born into an Anglican family of cattle herders from Ankole , attended Mbarara High School and Ntare School and studied economics , law and political science at Dar es Salaam University in Tanzania in 1970 . He studied in the USA at Grinnell College in Iowa together with John Garang , later colonel in the Sudanese army . He was close friends with him ever since. In 1970 he became an assistant in Milton Obote's cabinet . From 1971 to 1980, during Idi Amin's reign , he was in exile in Tanzania.

Return to Uganda and work in the resistance

Thereafter, Museveni returned to Uganda and participated in the overthrow of President Idi Amin . In 1979 he became Minister of Defense of the transitional government. After the disputed election victory against Obote Ssemogerere he went into hiding, founded and commanded five years, the National Resistance Army ( National Resistance Army ) and fought against Obote's rule. In 1985, together with other activists in Austria, he decided on a 10-point program at the “Zum green Jäger” inn in Unterolberndorf , which became the basis for the future constitution. After Obote's fall and a brief period of armistice, he continued his fight against the new President Tito Okello until he conquered the capital Kampala in January 1986 and took over the presidency.

In the following years, Museveni began to privatize state-owned companies and reduced government spending. Since then, Museveni's policies have repeatedly drawn Uganda into conflicts with the neighboring countries of Sudan , Rwanda and the Democratic Republic of the Congo .

He achieved some success in the fight against the AIDS epidemic. While Uganda had one of the highest infection rates in the 1980s, the spread of the virus is moderate today compared to other African countries. However, this still means an infection rate of at least 2.5 to 3 percent, sometimes 4 percent, and therefore at least one million infected people in each case.

In the suppression of the rebellion of the Lord's Resistance Army under Joseph Kony , who is venerated as a prophet by his followers and who calls for a state based on the principles of the biblical Ten Commandments , there were many losses. It is estimated that around 500,000 people were killed in this conflict and 800,000 displaced people in Gulu , Pader and Kitgum districts .

In 1995, Yoweri Museveni and Zaire's President Mobutu Sese Seko met at a secret meeting in Bad Kreuznach to achieve reconciliation.

In November 2005, he announced that he would run again in the 2006 presidential election. A constitutional amendment made it possible for him to have a third term in office, but for the first time also allowed other parties besides the National Resistance Movement . His main rival, Kizza Besigye, of the Forum for Democratic Change , which came second in the 2001 elections, was arrested shortly before - a few weeks after his return from exile - and brought to trial for treason and rape. Museveni was re-elected president in the February 23, 2006 elections with 59.28 percent of the vote. Kizza Besigye came in at 37.36 percent.

In 2014, despite initial concerns, Museveni signed a law passed by the Ugandan parliament , threatening same-sex sex with a minor or an HIV-infected person with life imprisonment. After this law was annulled by the Ugandan constitutional court for formal reasons, he declared in 2015 that he would no longer pursue the tightened tightening of the “anti- gay law”. At the beginning of March 2014, there were false reports in numerous media that Museveni's daughter, Diana Kamuntu, had declared in a radio interview that she was lesbian .

Reports from 2009 show a connection between Museveni and the American fundamentalist evangelical organization The Family . Museveni is described as a “key figure for Africa” in this influential religious-political network. Against this ideological background, Museveni's stance against homosexuals is understood, which he regards as a sign of Western immorality and which in turn is an expression of the neo-colonial influence of the West on Africa.