The Štark Arena ( Serbian - Cyrillic Штарк арена ) is currently the largest multi-purpose hall in the southeastern European state of Serbia and the fifth largest in Europe . It is located in the Belgrade district of Novi Beograd . From 2004 until the renaming as an advertising medium for the Kombank - credit institution in 2012 it was called Belgrade Arena . Since 2017, the hall has been sponsored by the Štark Arena for five years .

The Štark Arena is a multifunctional arena with a playing area of ​​48,000 m². Depending on the event, it can accommodate between 18,000 and 25,000 spectators. The hall, which costs 70 million euros, has a total of 18,386 seats. This includes the total of 860 seats in the 70 luxury boxes . You can for basketball , handball , volleyball , tennis , futsal , hockey , but also for concerts and various events are used for cultural areas. In addition to numerous international sporting events, u. a. Also in 2008 the 53rd Eurovision Song Contest was held in the Štark Arena.

Štark Arena from the north-west

The Štark Arena is located in the Novi Beograd district on the left-hand side of the Sava , about four kilometers southwest of the city center. The Šid – Preševo ​​motorway (European roads 70 and 75 ) passes near the arena . It is about 11 kilometers from Nikola Tesla Airport to the arena.

After construction began on the arena, sanctions were imposed on the Federal Republic of Yugoslavia , whereupon construction was stopped. Shortly afterwards, the city was bombed by NATO troops in 1999 as part of Operation Allied Force . After a change in the country's political leadership, the arena was completed in 2004.

Design and start of construction

In 1989 Belgrade planned to host the 1994 World Basketball Championship . The only condition was that the city had to build a new basketball arena. A competition for the best design was immediately started. The new arena should have a minimum capacity of 20,000 seats. The design by Belgrade architect Vlada Slavica won.

In 1991, Blok 25 in Novi Beograd was chosen as the location for the construction project. But the project was under time pressure, as the entire arena infrastructure had to be built in the remaining three years before the World Cup. A team of 135 companies was put together and two architects designed the roof of the arena. Construction of the arena began in the same year. A partnership was formed with the US company HOK Sport Venue Event , which had some experience with the construction of sports objects. With the disintegration of Yugoslavia and the sanctions against the Federal Republic of Yugoslavia , the cooperation was ended, but even during this time the construction of the arena continued.

In 1993 there was a record inflation . As part of the sanctions imposed by the United Nations , Belgrade was deprived of the 1994 World Basketball Championship. After this FIBA sanction , construction continued, even if it slowed down even more due to a lack of building materials, until it stopped completely in 1995.

Construction was not continued until 1998, as Belgrade was chosen as the venue for the 1999 World Table Tennis Championships . At that time the roof structure of the arena was almost completely finished and the construction of the facade had begun. Because of the bombing of the city by NATO in the course of the Kosovo war in 1999, the table tennis world championship was also canceled.

After the change of government of the Federal Republic of Yugoslavia in 2000, all sanctions were lifted and the arena was completed in 2004. In the same year the basketball diamond ball in 2004 and in 2005 the European basketball championship took place in the arena.

In 2005 there were many sporting events and concerts in the arena. It became more and more popular and well-known, work began on an automated fire protection system and lifts were installed. All the work aimed at achieving European standards for the stadium was completed in November 2006. No events have taken place in the meantime. On November 4, 2006, what was then the Belgrade Arena was reopened. 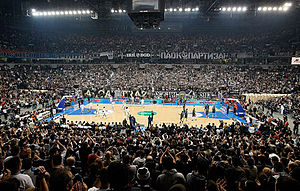 The most popular event was Zdravko Čolić's concert in October 2005. About 25,000 people were accommodated in the arena. The most attended event by an international star was the US rapper 50 Cent's concert in November 2006. At that time, 18,000 people attended the concert.

On March 26, 2014, the Eurocup basketball game between the basketball teams of Red Star and Budiwelnik Kiev, with 24,232 spectators, set a new European record for a game between two club teams played in a European hall.

In February 2007, the Serbian basketball coach Božidar Maljković wanted to name the arena after the Serbian basketball coach Aleksandar Nikolić . He launched an initiative and presented his proposal to the city ​​council and President Boris Tadić , which was not followed. In 2016 the Pionir Hall was named Aleksandar Nikolić Hall . On June 20, 2012, Kombank ( Komercijalna banka ) and the operators signed a sponsorship agreement on the name of the hall after the bank submitted the highest bid in a public tender. Since September 2012 the hall has been bearing its current name for an initial five years. The income from the contract was u. a. used for renovation. After the contract expired in October 2017, the Belgrade-based food manufacturer Štark gave its name to the hall, which will be called Štark Arena in the future .

The arena seen from the southeast

The first event in the arena was a campaign by the political party Socijalistička Partija Srbije for the election in the year 2000 in the Federal Republic of Yugoslavia . The first official event was the concert of 50 cents on November 6, 2006. One of the biggest events in the arena were sporting events like the Eurobasket 2005 , 2005 Men's European Volleyball Championship , European Table Tennis Championships in 2007 and the European Judo Championships in 2007 . In 2016, the water polo European championships were held in a temporary swimming pool in the arena , and in spring 2017 the 34th European indoor athletics championships took place in the arena. In May 2018, the Final Four of the EuroLeague 2017/18 (basketball) will take place in the Belgrade Arena. Until then, u. a. be invested in a new video cube , a sound system and LED lighting.

There were concerts by national and international artists such as 50 Cent , Rammstein , David Copperfield , Rihanna , Phil Collins , Eric Clapton , Guns N 'Roses , The Chemical Brothers , Eros Ramazzotti , Andrea Bocelli , Alicia Keys , Beyoncé Knowles and Shakira . In May 2008 the Eurovision Song Contest 2008 took place in the former Belgrade Arena . For this purpose, a new multimedia room was built in February of the same year. On May 21, 2011 the dance event Sensation took place in the arena for the first time .

Interior of the arena during the 2012 European Handball Championship