He was the son of Christoph Pittel from Krems an der Donau , who on April 1, 1819, was elevated to the Austrian baron status as an imperial and royal engineer captain with the award of the Military Maria Theresa Order .

Baron von Pittel, a captain in a hunter battalion in the Austrian army who took part in Radetzky's campaign in Italy and who retired from active military service for health reasons after the end of the Second Schleswig-Holstein War , initially lived briefly in Kaumberg . As a former pioneer and graduate of the engineering academy in Klosterbruck , he was well versed in technical matters. In 1869, he bought a plant built by Johann Beihol in 1852 in Taßhof on the right bank of the Triesting , enlarged it and equipped it with the latest machines for producing novel cement .

In 1870, just three years after the Frenchman Joseph Monier applied for his patent for reinforced concrete , Pittel began producing novel cement in Weissenbach an der Triesting - and is therefore one of the pioneers of the Austrian cement and concrete industry.

Also in 1870, Pittel founded the construction company Pittel & Brausewetter, a construction company and cement goods factory , which still exists today, together with his friend Ing.Victor Brausewetter , who was a civil engineer who ran a technical office in Pressburg . A wide variety of construction methods were tried out, patents were developed and applied. These pioneering achievements were recognized in 1890 at the Agriculture and Forestry Exhibition in Vienna when they were awarded the Golden State Medal.

The distance between the Pittel - & - Comp. Production facility in Taßhof and the company branch in Pottenstein was very large in view of the traffic conditions at the time - all transports were carried out by horses or oxen. In 1872 Pittel therefore bought a sawmill and Lohstampfe located next to Triesting, built in 1846 , redesigned it into a cement mill and began producing " concrete goods " and artificial stone products in this company around 1880 . The company's headquarters remained in Pottenstein.

Around this time, the question of the construction of the planned rail link between the western and southern runways moved the local public in particular. Pittel, supported by the building contractor Peter Giacomozzi, proposed the current route of the Südwestbahn (Leobersdorf – Hainfeld – St. Pölten) as early as 1869 . - From October 3, 1877, the entire line could be used in regular operation; the construction of the Taßhof stop, which opened in 1882  - right next to the factory facilities - can be attributed to Pittel's initiative.

In 1878 Pittel moved from Pottenstein to Weißenbach, after having acquired an existing house and had it extended (today Kirchenplatz No. 40). In the same year the partner Ing. August Braun resigned from Pittel & Comp. out. The baron was now the sole owner. With the move to Weißenbach, he also actively intervened in the events of the place, which was to take an unexpected boom through him.

Pittel asked the community to provide 400 square fathoms of community land between his company and the slope of the Geyerberg in order to be able to expand the production of artificial stones previously operated in Nussdorf and to build workers' apartments. He wanted to promote the economic situation of the community and its residents. On these grounds, houses for employees and workers were subsequently built, but no further facilities, as Pittel enlarged the company premises by acquiring a second, old mill located on Furtherbach and thus created the actual production facility for cement products. The need for cement was enormous: the kiln plants in Taßhof were expanded, two more kilns were built in 1883 and two shaft kilns in 1888. The production of Portland cement products also increased considerably.

The establishment of a power station with an output of 51 kW in the factory in Weißenbach in 1886, one of the first power stations on the soil of the Austro-Hungarian monarchy, testifies to Pittel's openness to technical progress.

Around this time, Pittel himself moved from house number 40 to a large villa built by Baron Kometer, a brother-in-law of Cornides (today Sullnhof ), and acquired a number of other properties in the area.

The year 1895 brought various changes, some of which were important. In addition to Emil Klein, Pittel also gave his nephew Oskar Ritter von Negrelli-Moldelbe, an active officer in the Imperial and Royal Army and a grandson of Alois Ritter von Negrelli , the creator of the plans for the construction of the Suez Canal , the collective procuration . The most important change of the year, however, was the merging of the cement factories in the Triestingtaler area to form the Kaltenleutgender Kalk- und Zementfabrik public limited company . The main work of this AG was the AG of the kuk priv. Hydraulic lime and Portland cement factory to Perlmoos, also founded in 1872 , formerly Angelo Saullich (from 1998: Lafarge Perlmooser AG ).

Hand in hand with the establishment of the AG, Pittel sold the plant in Taßhof and the facility in Badgasse to the new company. The new company continued the production of cement in Taßhof, as well as the further processing in the Weißenbacher plant (Badgasse). - In 1898, after reaching the age of 60, Pittel was awarded the Order of the Iron Crown III. Class excellent. - This was immediately preceded by Pittel's involvement in the construction of the Kaiserjubiläums-lookout tower located on Pottensteiner cadastral area , which was opened on August 6th, 1898 in honor of 50 years of reign of Emperor Franz Joseph on Ludwigshöhe , rising in the triangle Weissenbach-Fahrafeld-Pottenstein .

Pittel still had many plans for Weissenbach. The company was at the zenith of its success when suddenly an unexpected turning point occurred: Christmas 1899 was just around the corner and, as every year, Pittel went to Vienna to buy gifts for the upcoming company party. In doing so, he caught a cold, which he ignored for the time being, although he constantly had to do with the lungs and had to wear a bodice that supported his spine up to his neck. The illness quickly worsened, there was a high fever, and Pittel could no longer leave the hotel. All medical efforts were in vain: on January 6, 1900, Baron Pittel died.

Pittel's unexpected death was a severe blow to the company and the place. The business was continued by his wife Leopoldine, née de Collins-Tarsiennes , a fine -minded , highly intelligent, kind, but not up to business life , as the sole owner with the help of some employees. In 1904 a branch was founded in Vienna and in 1905 business activities were expanded to include trading in cement products and managing construction companies. The latter was necessary because the Pittel & Brausewetter construction company had meanwhile passed into other hands. In the entire Austro-Hungarian monarchy and in the Balkan countries there were construction sites for the new Pittel company: bridges, hydraulic structures and all kinds of buildings.

After Pittel's death, the original industrial plant could no longer find the right management, the world war and its consequences (above all the loss of domestic sales markets) did theirs, the company went into liquidation and the company was deleted from the commercial register on June 14, 1926 . - The whole area in Weißenbach was bought by the Wollner & Kreisler company, which, in addition to the electricity company, also had a woodworking company and a sawmill.

If you consider that Pittel had involved his nephew Oskar Ritter von Negrelli-Moldelbe at a crucial point in his Weissenbach company and that the Austrian company Negrelli-Bau-AG subsequently emerged from this, then you can see the enormous importance of Pittel for the Austrian company from these contexts alone Construction industry not only in the last third of the 19th century. Pittel was significantly involved in the founding of the Association of Austrian Industrialists , and when he brought his two Triestingtal cement production sites (Tasshof and Weissenbach) to the Kaltenleutgender Kalk- und Zementfabrik in 1895 , he took on the role of Vice President and Board of Directors.

The Steyr swimming school bridge on a photo from 1902. The bridge gave way to a new building at the end of 1959.

The outstanding importance of Pittel is evident not only in the numerous locations that Pittel + Brausewetter maintained throughout the Austro-Hungarian monarchy, but also - in relation to Adolph Baron Pittel & Comp - in taking over the general agency for the Austrian Alpine countries of Saxonia- Light and cable masts , the concrete construction company Rudolf Wolle from Leipzig or the sole right to execute the Melan patent ( Joseph Melan ), a special reinforced concrete construction in which the swimming school bridge in Steyr (Upper Austria) in 1898 , the first three-hinged bridge with a 42 m span and at that time the flattest Concrete arch bridge in the world, built and recognized accordingly in the relevant trade press.

In addition to his achievements as an industrial pioneer, Pittel was above all a socially minded entrepreneur for whom the future of his home community, Weissenbach an der Triesting , was a particular concern. In the cement factory, which gave 200 people work and bread , he introduced a pension scheme for employees in 1899 and built several houses and a kindergarten for them. The construction of the Südwestbahn through the Triestingtal goes back to his commitment , he also recognized early the potential of Weissenbach as a summer resort and invested generously in the expansion of the community. The first electrical street lighting, parks, restaurants and hotels as well as the construction of the neo-Gothic church, appropriately accentuated by a generously dimensioned avenue, go back to his initiative. Weissenbach already owned an outdoor pool made of rammed concrete (Badpark) before 1886 and was praised in contemporary travel guides as the “Pearl of the Triesting Valley”.

At that time, Weissenbach was a popular meeting place for artists who were important at the time and who accepted Pittel's invitation: the librettist and director of the Theater an der Wien, Camillo Walzel, built his summer villa in Weissenbach (Zellgasse). The sculptor Theodor Charlemont , the painters Franz Lefler and Heinrich Lefler and the architect Joseph Urban , who was successful in the USA from 1911, were welcome summer guests in Weissenbach. The Austrian author, Jeannie Ebner , who spent her youth in Weissenbach, set a literary monument in her novels to this cultural heyday of Weissenbach, which was largely determined by Pittel's far-sighted work . One of Vienna's busiest architects at the time, Ludwig Schöne , was able to be won over from 1888 to design the aforementioned church, which was consecrated in 1893. The same architect is responsible for the beautiful arcade cemetery built in 1895 above the village.

This is also where the Pittels family crypt, logically assembled from prefabricated artificial stone elements, is located. Arthur Krupp , industrial magnate and - following the example and example of Pittel - patron of Berndorf, regretted having lost his best friend to Pittel on the occasion of his untimely death in 1900. On the church square in Weissenbach, a bronze bust with the inscription, “ The community of Weissenbach grateful to your sponsor ”, commemorates Adolph Freiherrn von Pittel. The bust is based on the formerly so-called church park , the layout of which also goes back to the initiative of Adolph Freiherr von Pittel: alternating between the social reform idea of ​​the park as a social factor and a concept of a designed synthesis of religion, art and nature that is committed to the spirit of Romanticism , the church square still forms a worthy setting for the sacred building mentioned above.

Pittel's wife, Leopoldine, like her husband, showed herself to be charitable: she visited and cared for the sick and alleviated a great deal of hardship . Completely penniless and dependent on the help of others due to the removal of one leg, she lived quietly and withdrawn until her death. She died at the age of 80 on September 25, 1929 in Weissenbach an der Triesting, where she was buried in the family crypt. 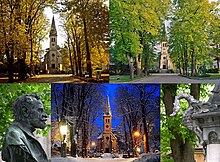