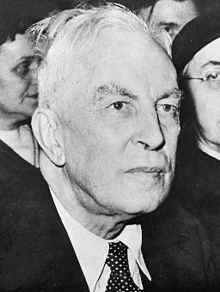 Arnold Joseph Toynbee (born April 14, 1889 in London , † October 22, 1975 in York ( Yorkshire )) was a British cultural theorist and an important history philosopher of the 20th century. He is considered the last great universal historian .

His father was Harry Valpy Toynbee (1861-1941), a brother of the British economist and economic historian Arnold Toynbee , with whom he is often confused. Toynbee studied history in Winchester , in Heidelberg and at Balliol College in Oxford and worked in both the First and the Second World War for the British Foreign Office . He was an advisor to the War Propaganda Bureau and wrote propaganda pamphlets against the Central Powers .

After the war he took part in the Versailles Peace Conference in 1919 . Immediately thereafter, he took over the newly created chair of Koraes Professor of Modern Greek and Byzantine History, Language and Literature at King's College London . After he had referred to Greek war crimes in the Greco-Turkish War in the Manchester Guardian , the chair was removed from him. From 1924 he held the Chair of International History at the London School of Economics and Political Science . From 1925 to 1956 he was also director of the Royal Institute of International Affairs . He was elected to the British Academy in 1937, the American Philosophical Society in 1941 , the American Academy of Arts and Sciences in 1949, and the American Academy of Arts and Letters in 1950 .

The course of world history

Between 1934 and 1961, Toynbee worked on his twelve-volume magnum opus A Study of History ( The course of world history ) , in which he, the conditions of emergence, rise and fall of cultures ( civilizations analyzed) comprehensively. In doing so, in turning away from Eurocentric historiography , he devoted as much attention to non-European cultures as to European ones. The work established Toynbee's reputation as one of the last great universal historians in the tradition of Jacob Burckhardt and Oswald Spengler .

From A Study of History : Lord Macartney in China, 1793

The course of world history ties in with Oswald Spengler's The Fall of the West , but does not represent his culturally pessimistic-deterministic view, according to which all cultures go through a quasi-natural and independent development of rise, flowering and decay. Rather, Toynbee propagates an evolutionary, in principle open-ended and thus differentiated view. According to this, not all cultures develop in a constant cycle of rise and decline, but in each case differently - depending on their ability to respond appropriately to challenges.

He takes the view: the higher the incentive to develop a culture, the higher its later stage of development. The challenge could also be too strong and lead to an overstretching of the forces. Accordingly, cultures that are faced with challenges that are too simple or too difficult do not develop at all or stagnate. The latter is the case with the Polynesians and Eskimos , for example , who have faced the extreme challenge of colonizing the water deserts of the Pacific and the ice deserts of the Arctic .

Other cultures (Toynbee distinguished between up to 32), on the other hand, had found a solution to a task that had to be mastered - such as the ancient Egyptian culture on the annually recurring floods of the Nile land - and thereby came to great bloom. According to Toynbee, some of them go under, while others experience a transformation into one or more daughter cultures. The Western and Byzantine cultures, for example, emerged from the Roman - Hellenistic . Still others turned out to be very durable - because they were adaptable and changeable - such as the Chinese culture . Toynbee sees no abstract ideas or laws as the decisive driving force behind the story, but rather the workings of concrete people.

In Israel Toynbee was viewed critically and classified as an anti-Semite , not only because he viewed Israel as an unnatural anachronism and called it a "fossil". After a dispute with the Israeli ambassador in Ottawa, Ja'akov Herzog , Toynbee had to revise his assessments and soften them, while at the same time he made the Jewish state responsible for preventing the nuclear world war.

A central characteristic of "cultures" in Toynbee's sense is religion, which is why today's observers see parallels with Samuel P. Huntington's clash of cultures . On the other hand, he was critical of the humanism of ancient Greece and the Enlightenment's belief in human reason. He condemned modern nationalism in the strongest possible terms and also criticized European colonialism, in which he had taken an active part in his youth as a colonial official.

A critical recording of his ideas can be found in Franz Borkenau (end and beginning).

Toynbee saw the emergence of a universal world state whose great challenge, in his view, was to guarantee peace . In his last, universal historical work Humanity and Mother Earth from 1974, he writes:

“The present independent regional states are neither able to keep the peace, nor to protect the biosphere from human pollution or to preserve its irreplaceable sources of raw materials. This political anarchy must no longer continue in an ecumenical movement that has long since become a unity in the technical and economic fields. What has been necessary for five thousand years - and has proven feasible in technology for a hundred years - is a global political organization consisting of individual cells the size of Neolithic village communities - so small and manageable that each member knows and knows the other but is a citizen of the world state. [...] In an age in which mankind has mastered nuclear power, political agreement can only come about voluntarily. However, since it appears to be reluctantly accepted, it will likely be delayed until humanity has inflicted further disasters on itself, disasters of such magnitude that it will eventually consent to global political unity as the lesser evil. "

Toynbee is the father of the local historian Anthony Toynbee, who was active in the resistance against the Nazi regime in the Bonn "Group University of the KPD" under Walter Markov , who killed himself soon afterwards, and the colorful writer Theodore Philip Toynbee (1916–1981). He is also the grandfather of the well-known atheist civil rights activist and journalist Polly Toynbee (* 1946), the daughter of Theodore Philip Toynbee. His sister was the Classical Archaeologist Jocelyn Mary Catherine Toynbee . The economic historian Arnold Toynbee is his uncle.