Billboards at a kiosk in Frankfurt-Gallus 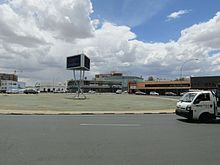 There was outdoor advertising over 5000 years ago on obelisks hieroglyphs as signposts for travelers; Almost 2500 years ago Egyptian traders chiselled sales messages in stone and set them up on streets (cf. Groucutt et al., p. 339).

Other historical forms of outdoor advertising are nose signs and poster advertising (see also: wooden letters ). In 1855, Ernst Litfaß from Berlin posted messages on a column for the first time, creating a kind of "newspaper for the street". Fritz Stahl complained in his article “Deutsche Plakate” from 1898: “In all countries except Germany, huge areas are available, and the colossal size of the poster alone can make an impression. […] The advertising pillars have a limited space, and the rounding also makes the effect more difficult. ”In addition to the advertising pillars that still exist today, large-format posters in particular have established themselves since the 1950s .

In modern versions, the posters are hung in showcases and backlit at night. The so-called mega-lights or city-light posters are partly equipped with a change mechanism that changes the posters at adjustable intervals.

In the CLB (City-Light-Boards) only 18/1 sheet posters are displayed, in the CLP (City-Light-Poster) cases 4/1 sheets.

In Germany there are over 200,000 locations with large areas, mega lights / city light boards and whole pillars / general points (the "descendants" of the advertising pillar). There are also a further 98,000 City Light posters.

Billboard advertising is controversial in many countries and cities. The basis for the criticism, which was also expressed by advertising experts such as David Ogilvy and Howard Luck Gossage , is the accusation that outdoor advertising is not integrated into public space, but rather blocks the unobstructed view of it. As a member of a society there is a compulsion to consume outdoor advertising, since it cannot be circumvented in public space. This is in contrast to all other forms of advertising, which are increasingly regulated using so-called opt-in and opt-out procedures. Gossage speaks of outdoor advertising claiming something that does not belong to it: the viewer's field of vision.

A special usage permit is required to affix posters and stickers in public spaces in Germany (also for election posters ), otherwise it is an administrative offense . Even on private property, if the size is determined differently by region, an official permit must also be available.

Advertising media for large areas are offered in different designs. In addition to free-standing and wall panels made of wood, aluminum or plastic, illuminated surfaces and showcases (mega lights, city light boards) are increasingly being used. Newer billboards, such as the combination of two 18/1 locations to form one large, illuminated 36/1 area, are being launched in Germany.

The observer's attention is also to be reached in other ways. Through movement and / or change of subject, for example by means of prism systems or roll changing systems. Entire “screens” ( video walls and the like) are usually only found in highly frequented places, as the high investment and operating costs are only justified then. Projections on house walls naturally only work during the night or in (semi) public indoor spaces such as subway stations or other waiting room situations (train stations, airports, etc.). Smaller screens are installed in public transport or taxis.

Giant poster with a 2D structure on Ernst-Reuter-Platz , Berlin

Easily visible scaffolding and outer house walls (including fire walls) with a corresponding number of people are definitely part of outdoor advertising. The house owner is in the rarest of cases also the marketer of such areas. These advertising spaces with 80 to 4000 m² are called giant posters .

There are also the following special form: Approximately in Austria also occur straw bales - or Strohf dreary -Werbungen on along highways and expressways. In this way, farmers wanted to use the straw bales that had been piled up commercially. At present (2005) one can speak of an inflation of large-format advertising, which has the consequence of a reduction in the effect and thus in the sales price (per m²) of an individual advertising medium. A causal reversal takes place. Scaffolding and straw drifts are put up because they should be advertised and not the other way around. Furthermore, the medium is losing acceptance due to wild growth and penetrance. Sections of the population speak of a destruction of the optical environment. Politicians try to react and draft legal restrictions.

Another special form of outdoor advertising is the so-called sandwich man , in which people are used as “walking advertising space”. A further development of this form of advertising are the so-called sign spinners, which perform tricks with an arrow-shaped advertising panel in order to attract the attention of passers-by.

Outdoor advertising can be viewed in different ways, including street art . Due to the growing number of advertisements in newspapers, as a result of the industrial revolution, the advertising market was discovered and soon that of inexpensive outdoor advertising. As early as the turn of the century, monumental advertisements were therefore being painted on the walls of houses, which, however, were often covered over by neighboring buildings or by newer billboards. An example of this is the "Seifix" wall advertisement from Dr. Thompson. A monumental mural that was created around 1900 in Hamburg and stretched over the entire facade was rediscovered in 1986 when the building next to it was demolished and restored in 1991. In 2018, however, it was painted over for thermal insulation measures. Just like a painting, it was unique and testified to artistic skill as well as a great deal of time and effort, which was already invested in advertising at that time. In addition, pictures like this adorn a house for decades, which makes it more important for advertisers and at the same time changes the streetscape of a city in the long term. The discovery of this wall advertisement enables today, on the one hand, ideas and insights into the advertising industry at its beginnings and, on the other hand, the reach and presence of advertising, but also the manufacturers and companies around the turn of the century.

Shop window advertising means that stationary retail shops are presented to the outside world. A wealth of concepts is available for shop window design, including a. Stacking windows, demand and occasion-oriented windows, fantasy windows, stage windows, so-called look-through windows (windows that allow a view into the shop), "blind" shop windows, air touch windows, etc. Especially for specialist retailers and department stores , an appealing presentation of the products plays an important role the display as well as an effective advertising design of the window surfaces play a role. These are usually labeled with company logos , advertising slogans and other design elements. In rare cases, a shop window is so valuable, especially because of its location in high-frequency locations, that it is rented out to third parties for advertising purposes via outdoor advertising agencies. The advertising subject can be seen from the outside on glued-on window film (it must be illuminated at night!). From the inside, only the perforated film can be seen and offers a 55% view, which is hardly noticeable in practice during the day. However, shop window advertising is not part of classic outdoor advertising. 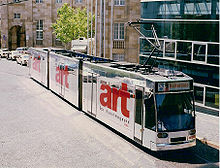 With a transport advertising is advertised inside or on the outer surfaces of buses, taxis, trains or trucks. The advertising on the outside surfaces can vary in size and shape. Partial designs are z. B. only attached under a window (fuselage advertising), placed as rear advertising or attached like a poster in standard sizes (e.g. "2 m² TB", formerly 4/1 Traffic Board, or "9 m² TB", formerly 18/1 Traffic Board ). With full designs , the entire area of ​​the vehicle is included - often the windows too. These are covered with perforated grid foils (window graphics), which nevertheless allow passengers a restricted view of the outside.

Brothel advertising on a vehicle trailer

Examples of mobile advertising media are: small trucks with billboards or roll change systems , vehicle trailers with billboards, truck semitrailers on which billboards for giant posters are automatically set up ( skyboard ), rental bicycles and promotional vehicles such as show trucks and information vehicles . Mopeds are now used to address specific target groups out-of-home at short notice (for example theater guests when leaving the performance building).

In a judgment of May 11, 2006, the German Federal Court of Justice ruled that car trailers with advertising signs may be parked on public roads without a special permit.

According to Section 12 of the StVO, a trailer may be parked in public parking lots and parking spaces for a maximum of two weeks in Germany.

In outdoor advertising, the G-value is the key figure for the attention values in advertising material, developed by GfK market research . For example, the degree of distraction, the duration of the contact opportunities, lighting, visual obstructions, the angle of the advertising medium in relation to the traffic, etc. are assessed (see also: Frequency atlas ).

Since 2003, the G-Wert has been changed as part of the G-Wert2 project to the extent that a "Frequency Atlas for Germany" has been drawn up in cooperation with the Fachverband Aussenwerbung eV (FAW), the Fraunhofer Society and GfK to determine the passage frequency represents the frequency base for the system and replaces the video process. The tripartite division of the traffic flows was retained, as was the internal logic of the system.

The G-value should not be confused with the thousand contact price (CPM). The G-value is merely an attempt (and the method used in practice) to compare the cost-benefit calculations of an advertising campaign in the outdoor advertising sector with those of an advertising activity in other media (print, TV, radio, etc.). However, only the subject-independent and qualitatively not assessed contact opportunity (to come into contact with this or that advertisement) is always put in relation to the necessary costs.

For the 2013 tariff year, the G value was replaced by the value “poster viewers per position” (PpS). According to the Media Analysis Working Group , the PpS value is "the visibility-weighted passage contact with an individual poster site and thus classified as an opportunity to contact advertising material". In addition to the criteria of the G-value (degree of distraction, duration of contact opportunities, lighting, visual obstacles, angle of the advertising medium in relation to traffic, etc.), the PpS value includes mobility data from over 40,000 selected people recorded by GPS and telephone interviews and thus enables a better evaluation of individual poster locations .

A German specialty is the decade system, which was developed by outdoor advertiser Günter Freund and is now being used across the industry under the direction of the professional association for outdoor advertising. A calendar year is divided into 34, alternately ten or eleven days long decades that can be occupied by the advertising customers. Because of the personnel capacity required for the change of motif, there are two adhesive blocks offset by a few days within the decades: First, all large cities with more than 250,000 inhabitants are posted (adhesive block A), then the remaining poster sites. The decade system has not caught on with the more modern City Light posters , here the booking period is the same as the calendar week with Tuesday as the day of the change of motif.

In Switzerland, poster locations are generally booked on a weekly basis (the days of the week for the change are determined by the surroundings of the poster location), whereas in Austria, booking takes place in a sector-wide, 14-day cycle.

Due to the user structure and the increasing mobility in our society, outdoor advertising is also ideally suited for combination with modern forms of communication. Via intelligent links with mobile marketing technologies - such as B. object recognition, Bluetooth or NFC tags - there are new addressing options for consumer communication. In 2014 Clear Channel Outdoor announced that 75,000 poster sites in 23 countries on 5 continents would be equipped with NFC and QR technology . In 2019, APG SGA installed the first new devices, which are operated with the Beem technology from Swisscom, on some billboards in Zurich's main train station . The smartphones of passers-by who have installed a corresponding app are addressed with a high pitched tone and advertised.