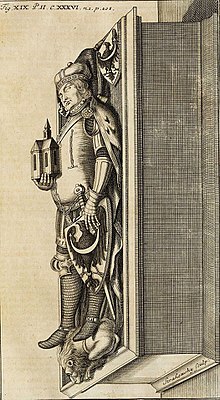 Bolesław III. on the grave slab in Leubus Monastery in Lubiąż , illustration (18th century) by the Silesian engraver Bartholomäus Strachowsky

Bolesław came from the Liegnitz branch of the Silesian Piasts . His parents were Duke Heinrich V († 1296) of Liegnitz and Breslau and Elisabeth († 1304), daughter of Duke Bolesław of Kalisch . Bolesław's siblings were:

Before January 13, 1303, Bolesław married Margarethe († 1322), the then seven-year-old daughter of the Bohemian King Wenceslaus II. Their children were born

After Margaret's death, Bolesław married Katharina Šubić , princess from Croatia in 1326 . The daughter came from this marriage

After the early death of his father in 1296, his brother Bolko I was appointed guardian over Bolesław and his underage siblings. Since Bolko died in 1301, the guardianship of the Bohemian King Wenceslaus took over , who thus gained further influence in Silesia.

After King Wenceslas death in 1305, Bolesław took over the government of his duchy for his younger brothers under the tutelage of Bishop Heinrich von Würben . In 1311 the paternal inheritance was divided. Bolesław received the Principality of Brieg with Grottkau as well as a cash settlement from his brother Heinrich, who was assigned the more valuable Duchy of Breslau , which only consisted of the districts of Breslau and Neumarkt . Wladislaus received Liegnitz. Soon, Bolesław tried to expand his power and reduce the legacy of his brothers, with whom he was constantly in disputes. His brother Wladislaus had to cede Liegnitz to him.

Boleslaw lived on good terms with the Bohemian King John of Luxembourg , with whom he was related by marriage through his first wife. In 1315 he concluded a protective alliance with him and in 1321 led the regency for this in Bohemia. Together with eight other Silesian dukes, Bolesław complained in 1320 to the Holy See in Avignon about the introduction of St. Peter's penny in the Wroclaw diocese in the new form of per capita tax, which until then had been levied per family. In the same year he pledged the Gröditzburg to the knight Swolo Busewoy ( Budziwój; Bożiwój ). In 1321 he received the entire land between the Oder and the Stober , with the exception of the village of Rybna, from Duke Bolko II of Opole . In 1323 he wrested the cities of Namslau , Bernstadt , Konstadt , Landsberg , Pitschen and Kreuzburg from the dukes of Oels . In 1325, the Pope unsuccessfully commissioned the Poznan bishop and the dean of Lebus to force Bolesław to return Liegnitz to his brother Wladislaus.

At the end of 1326, the Wroclaw administrator Nikolaus von Banz , who supported Bolesław's brother Heinrich in his efforts to join Silesia to Bohemia, was captured by Bolesław's followers and taken to Jeltsch Castle . After Heinrich ceded the Duchy of Breslau to the Crown of Bohemia on April 6, 1327 , Nikolaus von Banz was freed. On the way back from his Lithuanian train at the end of April 1329, Johann von Luxemburg tried to settle the dispute between the brothers Bolesław and Wladislaus over the Duchy of Liegnitz. Presumably because of this, Bolesław transferred the feudal sovereignty over Liegnitz and Brieg to the Bohemian king on May 9, 1329, making him dependent on Bohemia, which was confirmed with the Treaty of Trenčín in 1335 . In 1342 Bolesław left the Duchy of Liegnitz to his two sons and kept Brieg. In 1344 he sold Grottkau and the surrounding area to the Breslau bishop Preczlaw von Pogarell , who expanded his principality of Neisse and called himself "Duke of Grottkau".

Bolesław led a lavish lifestyle that diminished his vast possessions. He was excommunicated because of his hostility to the clergy. Only shortly before his death was the exclusion from the church lifted.