Bolt Thrower ( English for Ballista ) was an English death metal band from Coventry and was one of the most famous representatives of the death metal genre. The band name refers to a medieval weapon of war that is often associated with the tabletop game Warhammer Fantasy because of the band's early cover artwork . Bolt Thrower's lyrics are about war and its consequences. Due to the low prices for concert tickets and merchandising , the band was considered particularly fan-friendly. 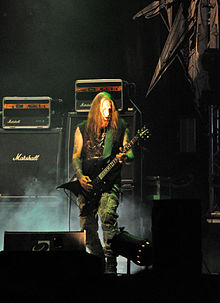 In September 1986 guitarist Barry Thomson and bassist Gavin Ward formed the band Bolt Thrower on the toilet of a pub in Coventry. Originally the band wanted to play a mix of hardcore punk and thrash metal . Main influences were Slayer , Discharge and Crass . A little later the band was completed by Thomson's friend Alan West ( vocals ) and drummer Andy Whale.

The first own songs sounded like a mixture of hardcore, thrash metal and punk . After the band had written enough songs, the band recorded the first demo In Battle There is No Law in April 1987 . Ward later took on the second guitar. Alex Tweedy was supposed to contribute the bass to the second demo Concessions of Pain . Tweedy didn't appear on the recordings, however, so Ward played both guitar and bass. Two weeks after the recordings were finished, Ward's friend Jo Bench became the new bass player.

At the end of 1987, the renowned BBC radio presenter John Peel got his hands on the second Bolt Thrower demo and was enthusiastic about the music. He invited the band to a peel session at the BBC studios, during which four songs were recorded that were regularly played by Peel on his show. The record company Vinyl Solutions became aware of Bolt Thrower and signed the band.

Shortly after the contract was signed, Alan West left the band. He has been replaced by Karl Willetts , who previously worked with the band as a driver. In 1988 the band recorded their debut album In Battle There is No Law (not to be confused with the first demo). Since Vinyl Solutions only allowed a little studio time, the album sounds accordingly raw and primitive. The album received minimal advertising. Since Vinyl Solutions was more of a hardcore label , the band separated from this company after an album and switched to Earache Records , which had several other British death metal bands under contract with Napalm Death and Carcass .

After another peel session on November 6, 1988, the band recorded their second album Realm of Chaos . The new songs were faster, but also more aggressive and powerful. The company Games Workshop designed the cover of the album. Some lyrics and song titles refer to the Games Workshop games, of which Willets, Ward and Whale in particular were big fans. This was followed by the Grindcrusher Tour with Napalm Death, Carcass and Morbid Angel , which was followed by a peel session, during which three songs from the upcoming album could already be heard in raw versions. In the same year appeared Cenotaph - EP . In 1991 the three peel sessions were published via Strange Fruit.

The third album War Master was also released in 1991. Musically, the band changed their course from Grindcore to Death Metal. The album was recorded in the Slaughterhouse Studios, which burned to the ground two weeks after the recording. Games Workshop again offered to design the album cover. Since the asking price was too high for the band, Bolt Thrower declined the offer. Bolt Thrower played their first tour in the United States . The band used an old school bus for this tour .

The fourth studio album followed in 1992 with The IV th Crusade . The title of the album refers to the fourth crusade . The album cover shows a picture by Eugène Delacroix , which depicts the entry of the Crusaders into Constantinople . Musically, the band used lower pitched guitars and slowed down the tempo. Together with Vader and Grave , Bolt Thrower went on the World Crusade tour through Europe. In addition, there was a chaotically organized tour through the USA and concerts in Australia for the first time . Another EP was released with Spearhead .

After the tour ended, the band went straight back to Sawmills Studios to record their fifth album ... For Victory . The pace of the songs was picked up again and the band partially returned to their hardcore / thrash metal roots. Both Willetts and Whale left the band after the recordings. The new singer was the Dutchman Martin van Drunen (previously with Asphyx and Pestilence ). Martin Kearns, who was only 19 years old, took his place behind the drums . With this line-up, the band went on tour in 1995 and 1996.

At the same time, the relationship between Bolt Thrower and Earache Records worsened. Both the negotiations about the termination of the contract with Earache and the negotiations with the new company Metal Blade Records dragged on. 1997 van Drunen left the band again. As a result of an illness, he lost his hair and did not want to go on stage with short hair. A short time later, Kearns also left the band. His last appearance took place at the With Full Force Festival. As a singer, Dave Ingram helped out from Benediction . Alex Thomas became the new drummer.

The search for a new singer turned out to be difficult. Van Drunen didn't want to, Dave Ingram was busy with his studies with Benediction and ex-singer Karl Willetts . When the band still didn't have a new singer shortly before the studio appointment, Willetts agreed to contribute his vocals for the new album. The sixth studio album Mercenary was finally released in September 1998 and gave the band their first entry into the German album charts. Shortly after the album was released, Earache Records brought out the compilation Who Dares Wins , which contains some older songs as well as the two EPs Cenotaph and Spearhead . Since this release happened without the band's approval, Bolt Thrower urged their fans to boycott this album .

For the Into-the-Killing-Zone -Tour 1999 Bolt Thrower presented their new singer with Dave Ingram. Ingram had previously left his old band Benediction. After the tour was over, Thomas left the band and was replaced by his predecessor Martin Kearns. After a short tour through Germany and the Netherlands , the band recorded their seventh album Honor - Valor - Pride in early 2001 . The album received excellent reviews from the press. In Rock Hard , the album even received the top grade 10. This was followed by a successful tour with Benediction and Fleshcrawl .

In May 2004 the recordings for the next album should begin. Then a tour through Europe and the USA was planned. However, singer Dave Ingram left the band for personal and health reasons. In November 2004, Bolt Thrower presented their new, old singer with Karl Willetts. The recordings for the eighth album Those Once Loyal finally began in May 2005, the album was released in November 2005 and again received excellent reviews.

Earache Records brought out a re-release of the album Realm of Chaos just in time for the release of Those Once Loyal , with a new cover. As with the compilation Who Dares Wins , Bolt Thrower called on their fans to boycott, as this re-release also took place without the band's consent. Bolt Thrower also accused Earache of not receiving any money in years.

In January and February 2006 the band went on a European tour with Malevolent Creation . A tour through the USA was planned, but had to be canceled due to lack of financial support from Metal Blade. On June 12, 2008, Bolt Thrower announced on their homepage that they had postponed work on a new album planned for 2008 for an indefinite period of time. According to the band, the background is that they have the feeling that with their last album Those Once Loyal they have released the ultimate bolt-thrower album and that they simply cannot surpass it with the new material.

In September 2015, shortly before a planned tour of Australia, Kiddie tragically died at the age of 38. The band then canceled all concerts and announced no new activities until further notice. Surprisingly, however, a new collaboration between Karl Willets and former bolt-thrower drummer Andy Whale in the band Memoriam was announced in January 2016 , which also includes Benediction bassist Frank Healy (formerly Napalm Death ) and Scott Fairfax, who like Healy, was previously active at Cerebral Fix . According to the members, the group originally emerged as a cover band "to fill the void after the death of BOLT THROWER drummer Martin" Kiddie "Kearns in September 2015," but decided "with the addition of Scott Fairfax to the line-up ... to make our own songs ”. A new album has been announced for 2017 on the Nuclear Blast label .

On September 14, 2016, a year after Kiddie's death, the band announced that they had split up.

Bolt Thrower had a unique and so far hardly copied style of death metal with grindcore elements (the latter especially on the first two albums). The songs are mostly in the middle and slower tempo and therefore have a great intensity. Fans associate this sound and the feeling at a Bolt Thrower concert with a tank going over the listener.

The texts deal mainly with the themes of war , violence , honor and suffering . No battles from history are named or retold. Karl Willets goes to museums dealing with war and war history for inspiration and out of his own interest . According to the singer Karl Willets, the war theme is to be seen as a synonym for life as such - an ongoing struggle with the pitfalls of existence. Furthermore, many of their albums and songs refer to the tabletop role-playing game Warhammer 40,000 .

A longsleeve with the Bolt Thrower logo

By running the band's business independently - without a promotion agency or merchandise company - the prices for tickets and merchandise for the band were kept low.

In response to popular requests from fans, the band tried to make at least one festival appearance per year. Since the financial aspect was not in the foreground for the band, the fans were allowed to vote online whether they would rather see Bolt Thrower 2008 at the Wacken Open Air , at a smaller festival or just in clubs. After the evaluation, Bolt Thrower decided to give preference to a smaller festival, namely the Party.San Open Air in Bad Berka. In 2009 the decision was made again in favor of a smaller festival, the RockArea Festival on the Loreley open-air stage . In 2010 they played at the Metalfest , in 2011 at the Summer Breeze and the Metal Invasion in Straubing . In 2012 they were one of the headliners at both the Rock Hard Festival and Party.San Open Air. On September 21, 2014, Bolt Thrower went on the Overture of War Tour 2014 through Europe.