The Carl Walther GmbH , based in Ulm and Arnsberg , is one of the best known manufacturers of firearms . The name Walther and its trademark - the curved "Walther loop" - are primarily associated with rifles and pistols for sporting shooting ( compressed air / small caliber ) and self-loading pistols for official use.

In 1886, Carl Walther founded the Carl Walther weapons factory in Zella St. Blasii , now part of Zella-Mehlis . The family business initially manufactured hunting and sporting rifles, in particular the "target rifles" that are widely used in German shooting. In addition, calculating machines were manufactured between 1924 and 1974 .

1929 brought the Walther still popular "Police Pistol" Walther PP as the first large-scale pistol with clamping departure on the market, the 1931 (not least later by James Bond ) worldwide known "police gun crime model" Walther PPK followed. Both models revolutionized weapon construction and became popular around the world. In the inter-war period, Walther in Zella-Mehlis produced more, e.g. T. trend-setting weapons. These include a .: 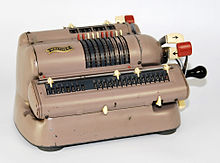 With the beginning of the Second World War , Walther was incorporated into the war economy as a key company in German arms production. In addition to the increased production of PP and PPK and the P38 pistol, Walther-Werke also built flare pistols and a 7.92 × 57 mm caliber self-loading carbine known as the K43 . Furthermore, just like CG Haenel , Walther was commissioned by the HWA with the production of a prototype for a machine carabiner ( StG44 ), but Walther's design was inferior to Haenel's and therefore did not go into series production. Walther weapons of war production can be recognized by the code designation "ac", which the manufacturer indicated in encrypted form. In the Neuengamme concentration camp near Hamburg, the Walther company operated a production facility with concentration camp prisoners from 1942/1943 , the Neuengamme metal works ( Walther-Werke ). The P38 and the Gewehr 43 were manufactured here, and from the beginning of 1945 also the Volkssturmgewehr . At the headquarters in Zella-Mehlis, hundreds of forced laborers also had to work in the German armaments industry during the Second World War.

After the end of the war and the flight of the owners and staff from Zella-Mehlis, which was occupied by the Red Army , Fritz Walther dared to start over in Ulm. In the meantime, the French company Manurhin in Mulhouse / Alsace had continued the production of Walther pistols under license. In April 1949, the 1000th new pistol was manufactured in Ulm.

In addition, the production of high-quality sporting weapons quickly got going again in Ulm: air and small-bore rifles, the air pistols LP53, LP2 and LP3, the sport pistols PP-Sport, GSP (both in caliber .22 lfB, the model GSP also in .32  S&W ) and the Olympic rapid fire pistol (Mod. OSP in caliber .22 short ).

More recently, the P5 and P5 Compact pistol models (based on the P38 as police pistols in accordance with the specifications of the Interior Ministers' Conference ), the P88 and P88 Compact (both further developments of the P38 with double-row magazine for 15 cartridges), the P99 (polymer grip, Browning Locking, double-action-only or partially pre-cocked trigger system), as well as the P22 (based on the model of the P99 as a small-caliber training weapon).

In addition to the products already described, the company also manufactured mechanical calculating machines from the 1920s to the 1960s . These were the first products after the dismantling of the Walther works in Zella-Mehlis after the Second World War and the new beginning in Niederstotzingen in 1948.

On Friday, November 16, 2012, the Walther company signed a contract with the Dutch Ministry of Justice to deliver 45,000 Walther P99 pistols to the Dutch police. The order volume is 13.5 million euros. The pistols were delivered to the police from 2013 to 2015.

At the end of September 2015, it became known that the public prosecutor was investigating the Carl Walther company for the illegal export of pistols to Colombia. On September 27, 2017, after almost exactly two years, the Stuttgart public prosecutor reported the termination of the proceedings via dpa : The small-caliber weapons delivered to Colombia were "of no military importance" and the export was therefore not subject to approval.

In 1993 the company was taken over by Umarex in Arnsberg and today, in addition to defense weapons, it mainly manufactures sport weapons such as B. the LP400 or the LG400. Production locations are Ulm and Arnsberg.

Since February 3, 2006, the UMAREX Group has owned the trademark and usage rights of the Hämmerli sporting weapon brand , which it acquired from SAN Swiss Arms AG. Production, sales and service are handled by Carl Walther GmbH in Ulm.