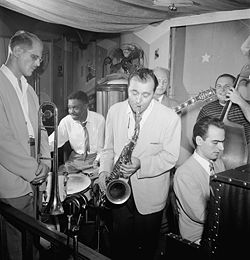 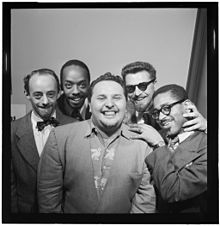 Jackson grew up in the world of showbiz as the son of parents who worked as musicians in vaudeville and Broadway . He began as a clarinetist at the age of sixteen, but soon switched to the double bass and from 1939 appeared with the big bands of Raymond Scott , Jan Savitt and Henry Busse . He toured with Charlie Barnet from 1941 to 1943 and then joined Woody Herman's first band. He formed the “soul” of this band and, with his indestructible humor and wit, became one of the most popular musicians of the post-war years. He was also active as a talent scout for the band and contributed to their repertoire with compositions such as "Northwest Passage". After Hermans First Herd broke up , he played with Charlie Ventura's Septet in 1947 . In the same year he went on a Scandinavian tour with his own band; this was the first bebop group to tour Europe.

After working again with Herman Jackson directed his own big band from 1948 to 1949. He played his own records, in which musicians from the hearth of Herman were involved and which show him as one of the first bassists to play longer solos. "We owe his inclination to experiment and goofing about original recordings with fluctuations in tempo or background noise that must have sounded very daring at the time." He invented a five-string double bass that the Kay Company made according to his specifications. He was instrumental in bringing Lennie Tristano to New York.

In 1951 Jackson appeared again with Ventura and formed another band with Bill Harris . In the 1950s he worked mostly as a studio musician and then appeared in several children's television shows ( Little Rascals Show , 1959-61; Looney Tunes Show and The Chubby Jackson Show 1962-63, for which he also directed a big band again). After moving to Florida, he worked as a jazz disc jockey in the 1970s.

He then lived in Chicago , Las Vegas and Los Angeles and retired in San Diego , but still performed occasionally with Lionel Hampton (1978-79) and Woody Herman. In the past few decades he has also hosted a cable television program and at the side of his son Duffy Jackson , who became known as a jazz drummer.

In 2000 Jackson was inducted into the Big Band and Jazz Hall of Fame .