A SyltShuttle in Morsum train station

The DB Autozug based in Dortmund was a subsidiary of DB long-distance transport and marketed the car and night passenger trains of Deutsche Bahn . DB AutoZug also operated the Niebüll - Westerland ( SyltShuttle ) car trains and the Wangerooge shipping and island railway .

On September 30, 2013, the company DB AutoZug was dissolved and merged with DB Fernverkehr AG. The train types AZ (Autozug) and CNL ( City Night Line ) continued to exist until December 2016 and were operated by DB Fernverkehr .

The company had been managing the car train business under the Autozug brand since the beginning of 1997. At the time of the timetable change on May 30, 1999, the company also took over the entire night travel of Deutsche Bahn, with the brands UrlaubsExpress and DB NachtZug . From 2002 until it was dissolved in 2013, DB AutoZug operated its own trains as a railway company . On January 1, 2003, the economic responsibility for the EuroNight and D-Night trains was also transferred to DB AutoZug.

The DB NachtZug and the UrlaubsExpress have operated under the new “ City Night Line ” brand since the timetable change on December 9, 2007 . At the same time, the DB Autozug service was reduced from around 1200 to around 920 trains (over the entire timetable period). Four out of nine DB Autozug loading stations were closed. According to the company, mainly short, uneconomical routes have been given up. In 2007, the company transported 183,000 vehicles and generated sales of 60 million euros. The company's market share for vacation trips by car was less than 0.5 percent. About 70 percent of the customers are regular customers, a quarter of the customers were retirees. The customers had an above-average income.

For the 2008 season, the offer was further reduced. In Germany, the terminal in Troisdorf was closed. The destinations Livorno ( Italy ), Fréjus ( France ) and Rijeka ( Croatia ) have been omitted. The train from Hamburg and Hildesheim to Salzburg has been shortened to Munich . In Alessandria (Italy) and Trieste (Italy), however, new terminals were put into operation.

At the 2010 timetable change in December 2009, the Talgo sleeping cars used jointly by Autozug and City Night Line were replaced by conventional DB AutoZug wagons.

Until December 31, 2009, the night trains were operated by the sister company City Night Line CNL AG , based in Zurich ( Switzerland ). As of January 1, 2010, the entire business operations, including the operation of night trains including all assets and liabilities associated with them, were taken over by DB AutoZug GmbH in Dortmund. The product name City Night Line was retained and the headquarters in Switzerland became a branch. For the 2012 winter timetable, the connections to Bozen , Verona , Trieste , Alessandria , Innsbruck , Schwarzach-St. Veith and Avignon discontinued from Berlin-Wannsee. In accordance with a board resolution, DB AutoZug was dissolved on September 30, 2013 and merged with DB Fernverkehr .

At the end of 2014, DB Fernverkehr announced that, due to falling demand and high costs due to an upcoming renewal of the vehicle fleet, it saw no economic prospects for classic motorail trains and would cease their operation by 2017. In 2013, 200,000 passengers used the car trains, 80 percent of them in the summer months. The Hildesheim terminal was closed with the timetable change. As an alternative, the “Auto + Zug” product was tested on the Berlin – Munich and Düsseldorf – Munich routes, with the car being transported by truck. Each truck could hold six to seven cars.

With the timetable change in December 2016, the Deutsche Bahn car trains were completely discontinued. The Sylt Shuttle , which continues to operate, is an exception . 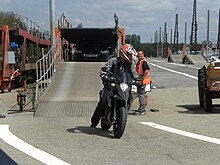 Unloading vehicles at the Autozug terminal in Narbonne

Entrance to the DB Autozug terminal in Berlin-Wannsee

DB AutoZug motorail trains ran within Germany as well as to France , Italy and Austria . The cars were loaded and unloaded in the DB Autozug terminals. The wagons loaded with cars were then attached to passenger trains. The following terminals were in operation when DB AutoZug was dissolved:

For the operation between Niebüll and Westerland, DB AutoZug offered the Sylt Shuttle with transport wagons built for this operation, the "Westerland units". DB Fernverkehr is currently responsible for this offer.

In October 2010, the Federal Network Agency , which also oversees competition in the area of ​​railway infrastructure, gave DB Autozug the task of drawing up conditions of use for the loading stations it operates in Niebüll and Westerland. These conditions of use enable DB-Autozug's competitors to use the loading stations as well and thus to use the Hindenburgdamm with auto-trains. DB-Autozug had lodged an objection to this decision with the Federal Network Agency and wanted to use the urgent procedure at the administrative court to ensure that it would not have to allow any competition at the loading stations until the final judicial clarification. However, the court rejected this urgent application. The judges decided that the car loading stations in Niebüll and Westerland were service facilities that could also be used by competitors. The court considered the ruling to be lawful and saw no special interests of DB Autozug which, as an exception, could have resulted in not having to comply with the ruling immediately. As the radio station NDR 1 Welle Nord reported on December 23, 2010, DB Autozug appealed against the decision to the Higher Administrative Court in Münster. On January 20, 2011, the Higher Administrative Court in Münster ruled that DB AutoZug must stipulate conditions as to how the loading terminals can be used by other providers.