The authentics bats (Pteropodini) are a generic group within the family of flying foxes (Pteropodinae): Sometimes they are referred to as flying foxes or long-nose bats, these names are not unique and are applied to different bat species. The group includes six genera ( Pteropus , Acerodon , Mirimiri , Neopteryx , Pteralopex and Styloctenium ) with around 70 species. 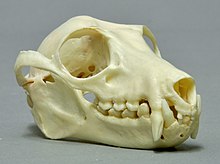 This group includes the Kalong ( Pteropus vampyrus ), the Indian giant bat ( Pteropus giganteus ) and the golden- crowned bat ( Acerodon jubatus ), the largest bats at all. They reach a head fuselage length of up to 40 centimeters, a wingspan of 1.7 meters and a weight of up to 1.6 kilograms. However, many species are significantly smaller, the smallest only reach a head body length of 10 centimeters and a weight of 100 grams. Most species are gray-brown or black in color, but some have patterns in the shoulder area, on the head or on the face. The ears are usually slightly pointed, the snout relatively long and - according to its name - dog or fox-like, the tail is absent in all species. As with all fruit bats, the eyes are relatively large.

Actual fruit bats are on many islands of the Indian Ocean ( Madagascar , Seychelles , Comoros , Mauritius , Réunion and the Maldives - but not on the African mainland), in South and Southeast Asia , New Guinea , northern and eastern Australia , southern Japan , Taiwan and distributed on numerous islands in the western and southern Pacific . Currently, the limits of distribution of the fruit bats are increasingly shifting due to advancing climate change.

Gray-headed fruit bat ( Pteropus poliocephalus ): wingspan up to over 1 m

Actual fruit bats are inhabitants of forests, swamps or mangrove areas. They usually hang on trees to sleep, often on small islands off the mainland. They mostly live in groups; Flying fox colonies can range from tens to millions of animals. In the evening they go in search of food, often covering long distances, including large distances across the sea.

The food of the actual fruit bats consists of fruits, whereby they only consume the juice of the harder varieties, but also consume parts of the pulp of the softer varieties. They also eat flowers or the pollen from them. Some species have been observed to drink seawater, presumably to gain minerals.

The births of boys within a colony are synchronized and usually seasonal, in the northern hemisphere in the first half of the year, in the southern hemisphere in the second. In some species, the females withdraw in nurseries for birth. The gestation period is five to six and a half months, and the mostly single young are suckled for three to six months. Sexual maturity usually occurs in the second year of life, and like most bats, life expectancy is relatively high: the highest known age of an animal was 31 years.

Many species play an important ecological role by pollinating plants or passing on seeds, especially on small islands. However, they are often persecuted as pests as they also look for food in orchards and gardens. Habitat destruction, hunting for their meat and the fact that many species are endemic to small islands all add to the threat. Several species are considered extinct, including:

11 species are listed as critically endangered by the IUCN , around 25 more as threatened or endangered.

Some species of the genus Pteropus native to Malaysia and Southeast Asia are considered to be a biological reservoir for representatives of the virus genus Henipavirus . The animals become infected diaplacentally before birth. In particular, the Nipah virus , which has been known since 1999, caused over 100 reported deaths in 1998 in Malaysia through infection of pigs. The epidemiological investigation of the fruit bats and the systematic reduction of their habitats in the vicinity of pig farms is carried out as an epidemiological measure. This accelerates the further displacement of the Pteropus species, especially on the Malay Islands. In Australia (Queensland), pteropus species are carriers of the Hendra virus , which so far has only caused isolated, but often fatal, infections in horses and humans.

Due to their physiological nature, flying foxes are affected by global warming . Persistent outside temperatures of more than 41 ° C lead to heat stress in the fruit bats and temperatures above 42 ° C can be fatal. This was the case during the 2018/2019 heatwave in Australia , when almost a third of all fruit bats in the northern part of Queensland died from the heat in November 2018 alone .

With around 60 species, Pteropus is the most species-rich species of flying fox. It is common throughout the above area. The most popular types include:

The genus Acerodon is similar to Pteropus except for details in the structure of the teeth. It includes five species that live in Indonesia ( Sulawesi and Lesser Sunda Islands ) and the Philippines . The golden crowned flying fox ( A. jubatus ) is one of the largest flying fox species with a wingspan of up to 1.7 meters. A. humilis was only rediscovered in 1999 after having been known for a long time only from a few museum specimens. The Sunda fruit bat ( A. mackloti ) is a typical tree dweller on the Lesser Sunda Islands. For a long time, the controversial species Acerodon lucifer was only known from a few specimens collected on the Philippines island of Panay between 1888 and 1892 . According to the zoologist Lawrence R. Heaney, this taxon is simply an extinct population of the golden crowned flying fox.

This genus includes only one species, Mirimiri acrodonta . It is endemic to Taveuni ( Fiji ) and used to be part of Pteralopex . It is listed as critically endangered by the IUCN.

This genus includes only one species, Neopteryx frosti . It is endemic to Sulawesi and resembles the bare-backed uggs with their flight skins attached to the spine .

The five species of the genus Pteralopex live on the Solomon Islands and are characterized by a woolly fur. All species are listed as critically endangered by the IUCN.

This genus Styloctenium comprises only two species: On the one hand, S. wallacei , which lives only on Sulawesi and offshore islands; It is characterized by roof-like white facial drawings. On the other hand, S. mindorensis , which was first scientifically described in August 2007 and is characterized by pronounced canines.

The systematics of the fruit bats is largely based on the phylogenetic study of Kate E. Jones et al. a .: A Phylogenetic Supertree of Bats . The authors do not use a rank in the classical sense for the taxa . The designation of this group as a tribe with the ending -ini is therefore chosen arbitrarily, sometimes this taxon is also found as Pteropodina.