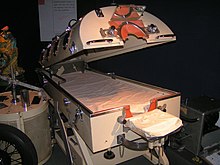 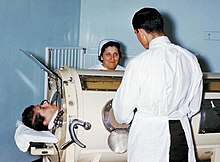 An iron lung was one of the first clinical devices that allowed mechanical ventilation of a person. It was developed around 1920 by the American engineer Philip Drinker for ventilating patients with lung disease. With the exception of the head, the patient's body lies completely inside a hollow cylinder. The device closes airtight at the neck and creates a negative pressure . As a result, ambient pressure forces air through the patient's nose and mouth into the lungs. Exhalation takes place accordingly through the build-up of overpressure in the chamber.

In the past, the iron lung was used for people with polio (polio). Polio is a viral disease , which is a paralysis of the muscles , including the diaphragm may occur. Many polio patients only need the iron lung in the acute phase of the disease until muscle function is restored. Some patients only used them overnight, others continuously.

Drinker first tested his invention on himself before the first use of an iron lung on October 12, 1928 at Children's Hospital in Boston . An eight-year-old girl with polio who had already fallen into a coma was resuscitated within minutes. Only after the device had been registered for a patent was it presented to the public on September 14, 1929. Engineer John Haven Emerson (1906–1997) later improved and simplified Drinker's invention. This made the iron lung much cheaper and could be built in larger numbers. Emerson's first prototype was ready in 1931. The cost of the subsequent series products was only about half as high as that of Drinker's system. A glass dome attached to these devices enables non-invasive positive pressure ventilation in those cases in which the patient is driven out of the steel chamber, for example for medical or nursing measures. A patent litigation broke out between Drinker and Emerson, and it was decided in Emerson's favor. Drinker's patents were annulled because Emerson was able to demonstrate that the relevant parts of the patents were known several decades earlier.

The devices were manufactured until around 1970. However, as of 2004, maintenance was no longer offered, although about a dozen people were still kept alive by an iron lung.

In Germany, due to a polio epidemic in 1947, the Hamburg doctor Axel Dönhardt first built an iron lung from war scrap like a torpedo tube . Shortly afterwards launched the Lübeck company Drägerwerk a mass production iron lungs. One of the last Germans to use the Iron Lung was Ferdinand Schießl, who slept in the steel capsule from 1958 to 2004 and then switched to a breathing mask.

In 2008, the 61-year-old American Dianne Odell died after 58 years of treatment because the power went out and the emergency generator failed. On October 30, 2009, the Australian June Middleton died at the age of 83, as the Thornbury nursing home in Melbourne announced. Middleton entered the Guinness Book of Records in 2006 - as a patient who, at 60 years of age, had lived in an iron lung for longer than anyone else.

In 2018 there were said to have been three users of iron lungs in the United States of America. One of them was Mona Randolph, who died on February 28, 2019. The last people to continue using the Iron Lung are Martha Lillard from Oklahoma and lawyer Paul Alexander from Dallas .

The iron lung has almost completely disappeared from the use of modern medicine with the introduction of endotracheal intubation . Today, patients with paralysis of the respiratory muscles are ventilated with other ventilators. The air is brought into the lungs by overpressure. A short-term replacement of the lung function can be achieved through the use of an ECMO (extracorporeal membrane oxygenation). This uses an oxygenator similar to that used on heart-lung machines .

Recently, so-called respiratory pacemakers have also been used sporadically , which, analogous to cardiac pacemaker systems, use electrodes near the diaphragm, which mostly stimulate inactive phrenic nerves due to high paraplegia and thus cause the diaphragm to contract again. A relatively expensive tracheostoma is no longer required; however, the breathing pacemaker must then be serviced.

A modern advancement of the negative pressure ventilation started with the iron lung is the cuirass ventilation . 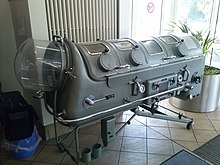 An iron lung can be viewed today at these locations (alphabetically by location):

Previous developments based on the principle of negative pressure ventilation in the 19th century were the “Tank Respirator” (1832) by John Dalziel and in 1875 the “Spiroscope” and in 1876 the “Spirophore” by Eugène Joseph Woillez.