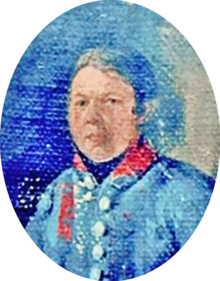 Emanuel Joseph von Herigoyen even d'Herigoyen , d'Irigoien (, port. José Manuel Herigoyen * 4. November 1746 in Belas in Lisbon ; † 27. July 1817 in Munich ) was a Portuguese architect , surveyor and cartographer . He was trained in Paris and Vienna . His most important places of activity were Aschaffenburg , Regensburg and Munich. The early classical buildings show elements of Louis-seize and Palladianism .

The father Martin von Herigoyen (Basque: high rock or high mountain ) came from an ancient noble family with ancestral seat in Ustaritz in the French Basque Country , was the truchess of the Portuguese Infante Dom Manuel Joseph Braganza (1697–1766) and a lieutenant in the army. He met Anna Margaretha Falorsi (Valorsy) on a diplomatic mission in Vienna in 1733/1734 , returned with her to Portugal and married her on November 5, 1738 in Belas, where they took up residence on the estate of Count Pombeiro.

Palais Montgelas on Promenadeplatz in Munich, built by Herigoyen in 1811–1813

Herigoyen received his education at the Royal College of Necessidades of the Oratorians of St. Philip Neri in Lisbon . He was probably instructed in drawing and painting by the Italian architect Giovanni Antinori (1733–1792), who came to Portugal to rebuild Lisbon after the earthquake of November 1, 1755.

From 1762 to 1767 Herigoyen was in the service of the Royal Portuguese Navy and made trips to Madeira , Brazil and the West African colony of Guinea-Bissau .

From 1767 to 1769 he studied drawing, architecture and mathematics in Paris ( Ecoles de Ponts et Chaussées or Académie d'Architecture). From 1769 to 1773 he worked primarily as a hydraulic engineer in Vienna and studied at the Academy of Fine Arts.

In 1776 Herigoyen became an architect and civil engineer for Friedrich Karl Joseph von Erthal , Elector and Archbishop of Mainz . At the end of 1792 he became head of the Electoral Mainz genius corps, and in 1794 major engineer and architect of the Mainz cathedral chapter .

From 1804 Herigoyen was city and country master builder for the elector and archchancellor Karl Theodor von Dalberg in Regensburg , and from 1810 to 1817 chief construction commissioner in Munich .

Herigoyen married Josephine Kriegshäuser , the daughter of the court musician Kriegshäuser from Speyer. The couple had two sons, including:

For the following buildings, Emanuel Herigoyen is assumed to be the most likely author:

The Hauptwache (built in 1818 according to plans by Michael Dobmayr) is wrongly attributed to Emanuel d'Herigoyen, who, as head of the Oberbaukommissariat in Munich, criticized Dobmeyer's plans and corrected them in parts.