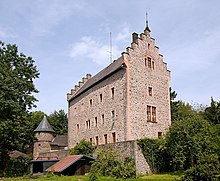 The Eppsteiner Schloss in Schotten , a town in the Vogelsbergkreis in Hesse , was originally built in the 14th century. The former moated castle at Schlossgasse 6 is a protected architectural monument .

The former official residence of the Lords of Eppstein was built as a moated castle after 1328. Destroyed by the city of Frankfurt in 1382 , the complex was rebuilt by 1403. The outer fortifications were demolished in the middle of the 18th century. After a fire in 1852, it was rebuilt. Parts of the moat are still preserved.

The square complex consists of a high, three-storey building made of quarry stone with corner blocks . The stepped gables were heavily renewed in the 19th century. A round stair tower has been preserved as the remainder of the external fortifications .

Castles and palaces in Hessen in the Vogelsbergkreis