The Schlossberg Ulrichstein is the ruins of a hilltop castle on the 609.7  m above sea level. NHN high Schloßberg in the northwestern part of the Vogelsberg and can be seen from afar from the plain. The town of Ulrichstein , the highest town in Hesse , in the Vogelsbergkreis in central Hesse extends below . On the hilltop of the Schloßberg are the remains of Ulrichstein Castle from the 12th century, which once served to protect important trade routes.

The panoramic view is sufficient in clear weather

The Ulrichsteiner Schlossberg is a former basalt chimney of the Vogelsberg, which originated in the Tertiary around 19 million years ago. Lava from the earth's interior penetrated through this chimney. As almost everywhere in the Hohen Vogelsberg, the basalt, whose distribution area is a total of 2,500 km² and in some places up to 300 m deep, is largely not on the surface, but under weathered loam and loess. 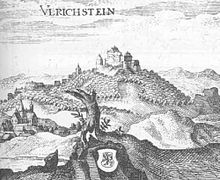 The initial ownership is unclear; the castle may have come to the Landgraviate of Hesse via Büdingen and the Breuberg family . What is certain is that in a document from 1296, the Ulrichstein forest is shown as the property of Heinrich I of Hesse . In the 14th century, this property came as a fief to the Lords of Eisenbach , who fortified and expanded the castle.

The Lords of Eisenbach were followed by the Barons of Riedesel as landgrave hereditary marshals and rent officials . They also used the outwork below the castle hill - basalt buildings from 1464 still preserved today - to collect road tolls and the " tithe " as well as to exercise jurisdiction until the end of the Old Kingdom in 1806.

The Schlossberg has always been a hotly contested area in the various wars. A memorial plaque at the entrance commemorates soldiers of the Seven Years' War buried here . In the western area of ​​the castle grounds there are honorary cemeteries with war graves from the First and Second World Wars .

From 1991 to 2005 a local non-profit association carried out extensive restoration work and tourist documentation on the castle ruins.

The restored castle remains as indicated walls to the south

Despite the restoration, the structure of the complex is only rudimentary. There was an inner castle wall (renovated in the early 1990s) with the defensive tower, which was last built in 1905, and an outer castle wall (renewed in 2000). In 2004/2005 the fortified tower, which is a good ten meters high, was given a new roof and converted into a lookout tower . In the south of the area, the foundations of stables and farm buildings as well as the castle chapel have been exposed, and a cistern was discovered in 2003 . The remnants of the palace within the inner castle were restored in the mid-1990s.

A small herb garden in the shape of a Latin cross was laid out in 1999 in the style of historical monastery herb gardens.

Sheep on the Ulrichsteiner Schlossberg; in the background the defensive tower, which was reworked as a lookout tower in 2004/2005

The six-hectare “Vogelsberggarten”, which is part of the “Hoher Vogelsberg Nature Park”, has been located around the castle ruins since 2001. 243 wild plant species grow in the "Vogelsberggarten", including protected species such as the globe flower .

A fenced-in model cottage garden, decorated by a rose arch in the entrance area, with useful and ornamental plants, kitchen herbs, fruit and vegetables was reconstructed for documentation purposes.

Historical trees, especially willow, ash and maple, are integrated into the nature trail.

Castles and palaces in Hessen in the Vogelsbergkreis