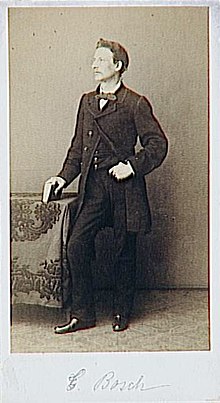 Ernst Bosch (born March 23, 1834 in Krefeld , † March 22, 1917 in Düsseldorf ) was a German painter, draftsman and graphic artist and representative of narrative painting at the Düsseldorf School of Painting .

Ernst Bosch was born in Krefeld as the son of the lithographer Jakob Bosch from Hechingen , Württemberg, and his wife Wilhelmine, née Hüskes, but grew up in Wesel . Here he attended grammar school up to secondary school, including with the painter Hendik Lot, who worked as a drawing teacher . He became friends with the later painters Ernst von Bernuth , Ludwig Hugo Becker and Ernst von Raven, among others . In 1850 he became a private student of the history painter Josef Schex (1819-1894) from Wesel, who introduced him to oil painting . From 1851 to 1856 he studied at the Düsseldorf Art Academy with Karl Ferdinand Sohn (Antikensaal), in the painting class of Theodor Hildebrandt and finally in the master class of the academy director Wilhelm von Schadow . After completing his studies, he became a member of the Association of Düsseldorf Artists for Mutual Support and Assistance , of which he was first chairman from 1892 to 1904, the Kunstverein and the artists' association Malkasten . In 1861 he married Bertha Havenith, a stepdaughter of his former teacher Josef Schex, sister of the painter Hugo Havenith and sister-in-law of the painter Karl Joseph Litschauer . He settled in Düsseldorf and lived at Rosenstrasse 35 next to Litschauer (house number 37) and Schex (house number 39). The painter Wilhelm Eckstein became the husband of his daughter Else in 1898 . In 1894, Bosch founded the Malkasten Archive. He died of heart failure on the eve of his 83rd birthday. He was buried in the Düsseldorf North Cemetery.

As a high school student and then as a private student of Josef Schex, Bosch devoted himself to drawings, including illustrations for Cooper's leather stockings . He also painted the portraits of his brothers, some relatives and friends. In the course of his studies, around 1853/54, he created the small oil paintings Inside St. Martin in Bilk and Keller of the old art academy , which are now in the Düsseldorf City Museum. This was followed in 1854 by the paintings The Surreptitious Traders and Defense of a Log House Against Indians by Colonists (purchased by the Kunstverein), the portrait of his friend Hubert Salentin (Düsseldorf, Art Museum) and The Grave of the Postilion (Frankfurt / Main, Bundespostmuseum). The compositions Fähre beim Eisgang (1854), The Hunting Accident (1855), The Alchemist's Room (1857) and A Budding Michelangelo (1858) were shown in exhibitions and positively discussed . The different versions of Fern der Heimat (a sleeping Savoyard boy discovered by children) and Der Ritt durch Wasser (a child on a large dog ) were successful, especially through their reproduction as etchings and wood engravings in the popular magazines Gartenlaube , Daheim and others ) The thieves school and The buffalo shepherd (1862), The tinker (1865), children at Christmas Get (1868), The painter at the edge of the forest (a socket in the Museum Wesel) and many others. Bosch, who was a lifelong friend of the painters Hubert Salentin, Friedrich Hiddemann , Christian Eduard Böttcher , Hermann Werner , Carl Thiel and others, took his subjects from bourgeois and rural life in an idealizing way and tried to find emotional values ​​such as joy and sorrow, home and the like to visualize. In addition, compositions based on models from literature (Werther, Hermann and Dorothea; fairy tales by the Brothers Grimm: Cinderella, Little Red Riding Hood) as well as numerous portraits and many depictions of dogs were created. Bosch created etchings and lithographs for portfolios and as single sheets. He created the text illustrations for numerous books, including Wilhelm Raabe's Die Chronik der Sperlingsgasse , which appeared in innumerable editions. Ernst Bosch showed his work mainly at exhibitions in Düsseldorf and Berlin, but also in Bremen, Hamburg, Munich and The Hague. In 1873 he was represented with the picture poachers in the art exhibition of the Vienna World Exhibition and was awarded a medal. In 1876 he received another award for his painting On the Pasture in the art exhibition of the World's Fair in Philadelphia. An exhibition of his posthumous work took place in 1917 in the Städtische Kunsthalle in Düsseldorf.