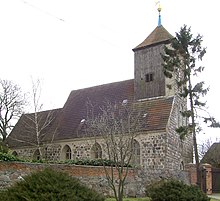 The area around Fredersdorf lies between the glacial valleys of Ucker , Welse and Randow on a ground moraine plateau , which is characterized by numerous pools , some of which are located immediately east of Fredersdorf. The place is located in a treeless, agriculturally intensively used area at about 50 m above sea level. NN . The ground relief is wavy, the elevations Schwarzer Berg with 63 m and Spitzenberg with 69 m above sea level. NN protrude only a little beyond the area. West of Fredersdorf lies a wetland several hectares in size, which is used as pastureland.

The name of the place indicates that it was founded by a locator named Friedrich as part of the German colonization in the east . The place, laid out as an anger village, belonged to the Premonstratensian monastery Gramzow, which was founded at the end of the 12th century . Nothing is known about the time of the acquisition by the monastery, the oldest written record of the existence of Fredersdorf is known as Fredrickstorff from 1540. In the 14th century, Fredersdorf and its immediate surroundings were Pomeranian . Since the Reformation , Fredersdorf belonged to the Gramzow office.

In the hereditary register of the Gramzow monastery from 1592, more detailed information on the population structure of Fredersdorf can be found:

In 1678 40 Huguenots settled in Fredersdorf , who founded their own parish (Reformed) parish in Gramzow.

During the Thirty Years' War the Fredersdorf Church was burned down by the passing troops of Field Marshal Johan Banér . It was rebuilt in 1703 preserving the old masonry and received a tower with two bells.

The following figures are available for 1805:

In 1906 Fredersdorf got a connection to the railway network. However, the route from Schönermark to Gramzow on the Schönermark – Damme district railway passed west of the village, so that the train station was about two kilometers outside the village center. On May 26, 1979, the line was stopped due to unprofitability and the tracks were later dismantled.

The associations that actively determine village life today include the village association and the Fredersdorf riding and driving association, as well as the volunteer fire brigade.

Fredersdorf has retained its rural character to this day, the inhabitants are employed in agriculture or in craft businesses. A small company that deals with automation technology is based in Fredersdorf. There is a day-care center in the village; Primary school locations are the nearby Passow and the community of Gramzow .

The connecting road leads through the municipality from Passow via Golm and Fredersdorf to Zichow . In Zichow there is a connection to the federal highway 166 from Schwedt / Oder to the Uckermark motorway junction ( A 11 / A 20 ) and to the district town of Prenzlau . At the southern exit of Fredersdorf, a road branches off to Polßen at federal highway 198 . The train station in the nearby municipality of Passow is on the Berlin-Stettin railway line .

Districts of the community of Zichow