Friedensdorf is a district of the city of Leuna in the Saalekreis in Saxony-Anhalt (Germany).

Bridge of the former railway line

Friedensdorf is located in Saxony-Anhalt, directly on the B 181 between Merseburg and Leipzig . The small village is hidden behind an embankment on the Merseburg – Leipzig railway line , which has not been used by train services since 1998. From a distance, the viewer can only see the top of the church tower.

It is bordered by Wallendorf in the east, Wüsteneutzsch in the south, Kreypau and Trebnitz in the west. The stream continues to flow through Friedensdorf in the west . 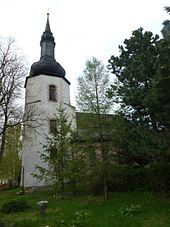 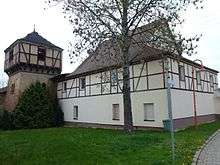 The place was renamed after the Second World War and was called Kriegsdorf until November 1, 1950 .

Up until 1815, Kriegsdorf belonged to the Hochstift-Merseburgischen Amt Merseburg , which had been under Electoral Saxon sovereignty since 1561 and belonged to the secondary school principality of Saxony-Merseburg between 1656/57 and 1738 . The decisions of the Congress of Vienna the place came in 1815 to Prussia in 1816 the county Merseburg in the administrative district of Merseburg of the Province of Saxony allocated.

The manor's baroque mansion was destroyed by bombs on November 2, 1944, and later demolished except for small remains.

The village church was built as a plastered quarry stone building, rectangular hall church, in place of a previous building in 1738. Its tower was damaged by German anti-aircraft bombardment on April 15, 1945. Its sold-out Welsche bonnet with a closed lantern was put on from the Naundorf church, which was demolished due to lignite mining .

Blazon : "In gold a black comb wheel, inside a floating black cross with rounded corners."

The coat of arms was designed in 1995 by the municipal heraldist Jörg Mantzsch and included in the approval process.

Localities and districts of the city of Leuna