He came from a noble family and was the son of the Count of Melzo Carlo Emmanuele Trivulzio and his wife Caterina Gonzaga , a daughter of Alfonso Gonzaga, Prince of Castelgoffredo. He was entitled Count von Melzo, signore of Castelzevio and Codogno. He later became the first prince of Musocco and Mesolina and prince of the Holy Roman Empire . His great-great-uncle was Cardinal Scaramuccia Trivulzio , his great-uncle was Cardinal Antonio Trivulzio the Younger (1514-1559). Other cardinals from the same family were Antonio Trivulzio the Elder (1457-1508) and Agostino Trivulzio .

In 1606 he became a knight of the Order of Santiago . In 1615 he married Giovanna Maria Grimaldi , the daughter of Ercole of Monaco and his wife Maria Landi. There were two daughters and a son from the marriage, his wife died in 1620. Giangiacomo Teodoro Trivulzio became a cleric of the Apostolic Chamber in 1625 and on April 21, 1626 Apostolic Protonotary participantium . In 1628 he was governor of Collescipoli.

Pope Urban VIII created him in the consistory of November 19, 1629 as a cardinal deacon . Giangiacomo Teodoro Trivulzio received the cardinal's hat and the title deaconry of San Cesareo in Palatio on December 17th of the same year. On June 2, 1631 he was appointed legate in the Marche . In 1638 he was governor general of the militia of the Duchy of Milan and superintendent of the fortresses. In 1642 he became grande of Spain (first class) as well as captain general and viceroy of Aragón . He participated in the 1644 conclave , which Pope Innocent X elected. On October 17, 1644, he moved to the titled deaconry San Nicola in Carcere and on December 12, 1644 to Sant'Angelo in Pescheria . From 1647 to 1649 he was President and Captain General of the Kingdom of Sicily and in 1649 Viceroy of Sardinia . Cardinal Trivulzio moved to the titular diaconia Sant'Eustachio on September 23, 1652 and on July 21, 1653 to that of Santa Maria in Via Lata , in the same year he became cardinal protodiacon . He took part in the 1655 conclave , from which Alexander VII emerged as pope. On May 14, 1655 Giangiacomo Teodoro Trivulzio was elevated to cardinal priest and received the titular church Santa Maria del Popolo . From December 2nd, 1655 until his death he was governor and captain general of the Duchy of Milan.

He was buried in the Santo Stefano church in Milan . 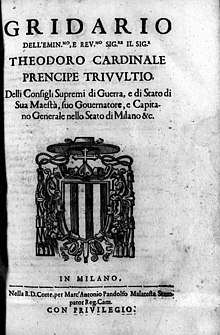