Sant'Angelo in Pescheria (Latin Santi Angeli in Foro Piscario ) is a Roman Catholic church in Rome . It stands partly on ancient remains, the rest of the portico of Octavia serves as an open anteroom. It is the monastery church of the Caraccioliners and titular church . It contains numerous relics . It is also known for its decoration with works of art from different centuries.

The church is located in the XI. Roman Rione Sant'Angelo . Its north side borders almost directly on the apse of Santa Maria in Campitelli . It has had its patronage since the 8th century from the Archangel Michael ; before that, according to the inscription in the interior, it was originally and probably only for a very short time consecrated to the Apostle Paul of Tarsus . It has the nickname in Pescheria because the Roman fish market was in the immediate vicinity until the early modern times, the nickname is first mentioned in the 12th century.

The upright components of the portico that are still in existence today, according to the Corinthian order, date from the Severan period; an architrave inscription has been preserved, dating from the year 203 AD. However, larger quantities of the components of the new portico were used under Emperor Commodus in 191 AD. There are indications that a church may have been built here in the late 5th or early 6th century, but the attributions are very uncertain. The inscription in the church, which for the first time almost clearly mentions its construction in the 8th century, reads: EST ENIM DEDICATIO ECCLESIE ISTIVS / AD NOMEN BEATI PAVLI APOSTOLI CALENDAS / IVNIAS PER INDICTIONE OCTABA ANNO AB INITIO MVNDI SEX MILIA DVNEMCENTOS / SEXAGINTA TRES TRES STEPHANI IVNIORIS PAPAE THEODOTVS / HOLIM DVX NVNC PRIMICERIVS SANCTAE SEDIS / APOSTOLICAE ET PATER VIVVS BENERABILIS DIACONAE A SOLO / EDIFICAVIT PRO INTERCESSIONEM ANIMAE SVAE / ET REMEDIVM OMNIVM PECCATORUM . The problem with the time - June 1st of the year 6263 after the beginning of creation - is that the inscription does not reveal whether it refers to the Alexandrian or the Creation era of Constantinople , which results in a difference of 15 years, either 755 or 770. Relics were also brought to the church for the first time in the 8th century, and more later. The crypt could possibly be from the 8th century. The church was given the shape in which it stands today, mainly during renovations in the late 13th century: only now the intercolumns of the remains of the portico north were partially used for the construction of the facade in this century, with the southern, front row the pillars that are missing today have been replaced by the round arch made of brickwork. On May 20, 1347, the church became indirectly part of the political history of Rome, Cola di Rienzo took the church as the starting point for his journey and the subsequent conquest of the Capitol. The Università de'Pescivendoli , the guild of the Roman fishmongers, was founded in 1571 at the fish market, which was located in the neighborhood until the early modern era . They took over the church as a guild church and equipped it further. The building was renovated several times in the 17th, early 18th and 19th centuries, partly fundamentally and in the style of the time. In 1869/70, also during restoration, the apse was lengthened by three meters. After its time as a guild church, the church was also a parish church until 1909 , after which it lost this function to San Lorenzo in Lucina . In 1928 the ceiling of the central nave collapsed and was replaced by the current wooden structure.

View into the central nave towards the apse, the arcade arch to the Cappella di Sant'Andrea cut in front right at the edge of the picture

It is also worth mentioning that the church is located in the area of ​​the former Jewish ghetto . The Jews living here were forced to listen to a Dominican sermon every Saturday in the event of failure to comply with the instruction . The decree comes from Pope Gregory XIII. from the year 1584 and, albeit significantly softened from 1823, only existed until 1847, Pius XI. got rid of him.

Between each of the three arcades , pilasters are presented to the pillars , as well as in the short, barrel-vaulted presbytery to the apse, according to the Ionic order with festoons , only the front right yoke follows the Tuscan order , it is the Cappella di Sant'Andrea .

The high walls of the central nave are broken through by five arched windows each, the wall surfaces in between are painted. The paintings, shown are coats of arms, are by Luigi Fontana from the 19th century.

The first aisle bay on the right from the entrance contains an altarpiece by the painter Giovanni Battista Brughi (1660–1730) from Genoa . Are shown the Hl. Laurentius and Cyrus .

The middle yoke of the right aisle contains the grave of Jakob Hieronymus Richebach, died 1841. He was a mathematician and astronomer and taught a. a. at what was then the Collegio Romano , now the Pontifical Gregorian University . His tomb also contains his bust. 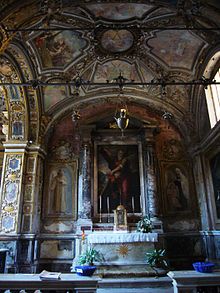 View into the Cappella di Sant'Andrea

The foremost yoke to the right of the apse was extended to the Cappella di Sant'Andrea . The work was commissioned by the Università de'Pescivendoli from 1571. The room is splendidly decorated with stucco and marble inlay , in the paviment there is the guild's coat of arms made of marble inlay. The altar structure follows the Ionic order in the flanking columns with festoons, an openwork triangular gable closes it. The altarpiece, shown is the patron saint, St. Andrew , possibly by Giorgio Vasari . The altar was built in 1727 by Pope Benedict XIII. personally consecrated. The frescoes of the underframe of the arcade arch and the vault are works of the 16th and 17th centuries with scenes from the life of St. Andrew , they come from Innocenzo Tacconi .

Opposite, in the foremost yoke of the left aisle, the lavish altar made of painted stucco and wood comes from the Baroque era . It contains a wooden crucifix surrounded by passion scenes.

The first yoke in the left aisle contains a fresco depicting Mary Enthroned with the Child Jesus and angels . It is a work by Benozzo Gozzoli or comes from his school. It was originally not located here, but on the northern outer wall of the sacristy . On the altar sheet is a Byzantine icon , a representation of Mary. It is stylistically related to the frescoes of San Nicola in Carcere , which indicates a time of origin in the late 12th century. The room still contains the graves of Cardinal Domenico de Simoni , who died in 1837, and of a woman, Mattea de Fuscis, who died in 1400.

The marble sarcophagus of the high altar in the apse contains the relics of a number of martyrs . They died in Tivoli , the bones were placed in the first church building in the 8th century. They fell into oblivion and were only rediscovered from 1559 to 1566 when the high altar was moved from the presbytery to the apse. Today's sarcophagus is quite a modern work, it was consecrated in 1873. It contains the saints Getulius , his wife Symphorosa and their seven children: Crescentius, Iulianus, Nemesius, Primitivus, Iustinus, Stateus and Eugenius , all sons. Two more saints followed under Pope Sixtus V , Cyrus of Alexandria and John of Edessa .

Finally, the crypt was not rediscovered until 1872. Access is from the high altar. It contains an anteroom measuring 2.30 × 2.30 meters, behind which is the actual crypt, it is 3.75 meters long and 6.95 meters wide. The room is divided by two columns of Ionic order that support the groin vault. It is not clear when the crypt was built, attempts to date it vary between the 8th and 15th centuries.