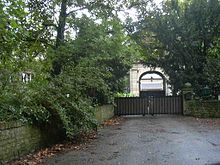 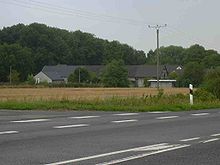 Gladbach with the hamlet of Mersheim is part of the municipality of Vettweiß in the district of Düren ( North Rhine-Westphalia ).

The old Roman military road from Zülpich to Neuss ( Roman road Trier – Neuss ) leads directly past the village . The coronation road from Aachen to Frankfurt also passed the site. The federal highway 477 follows the course of the Heerstrasse today . There is no through traffic in the place.

The place is characterized by agriculture. There are some smaller businesses in town.

The place was first mentioned as Gladebach in 922. This place name as a river designation in the sense of “smooth” or “shiny” suggests an earlier Germanic settlement .

The residential area of Mersheim, which is attached to the village , was first mentioned in 942, the name comes from the Franconian personal name "Marili".

On July 1, 1969, Gladbach was incorporated into Müddersheim. The place came on January 1, 1972 together with Müddersheim within the framework of the Aachen law to the new municipality Vettweiß.

The moated castle was first mentioned in a document in 1102. However, a castle complex had already existed north of the main street at that time. Today the "Kronenberg" can still be seen there, the rest of a moth . Today the castle is privately owned by the Viktor Rolff family , who operated open- cast lignite mining near Zülpich in the 20th century . The castle was expanded into a three-wing complex in 1715.

The St. Peter's Church was built in the 15th to 16th centuries. The tower was added in 1830. In the church a baroque are altar , many carvings and from the Rococo derived choir features to see. In 1998 the church received a new organ with eight registers from the workshop of Josef Weimbs Orgelbau in Hellenthal.

There is a small square with the memorial, which was built to commemorate the victims of the First and Second World Wars .

Buses on the Düren district railway now connect the town to local public transport via line 208 .

From 1908 the small train and tram ran along the site from Düren via Nörvenich to Zülpich and Embken. There was a large loading point for sugar beets across from the B 477 . Rail traffic was discontinued in 1960.

There is a kindergarten in the village run by the Arbeiterwohlfahrt .

In addition to the fire fighting group Gladbach of the Vettweiß volunteer fire brigade , there are the sports clubs Sportfreunde Gladbach and SG Neffeltal , the carnival society Verdötscht Glabige , the St. Sebastianus Schützenbruderschaft , the fair society, the VdK local group, the interest group Festhalle Gladbach , the interest group children and youth , the youth -Club-Gladbach, the 1. FC Köln Fan Club Neffeltal 98 and the church choir Gladbach-Lüxheim.