Treasure of Gold from Oedeme 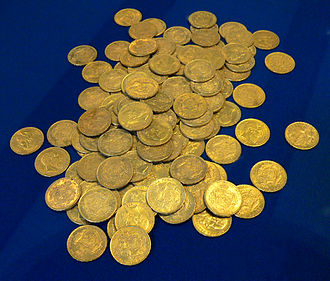 A part of the gold treasure of Oedeme, Belgian 20 franc gold coins with the portrait of King Leopold II.

The gold treasure from Oedeme is a deposit of 217  gold coins from the Reichsbank's holdings with a total weight of 1.4 kg, which was found in 2014 in the Lüneburg district of Oedeme in Lower Saxony . After the 1.7 kg gold hoard from Gessel, discovered in 2011, it is the second largest archaeological gold treasure in Lower Saxony. Although the gold treasure consists of investment gold from the 19th and 20th centuries that is still in circulation , archaeological monument preservation attaches great importance to it due to its historical background. She suspects a resignation in the turmoil towards the end of World War II or in the immediate post-war period .

A probe discovered the gold treasure in October 2014. He is one of around 200 probe walkers in Lower Saxony who have been trained and certified by the Lower Saxony State Office for Monument Preservation . The probe user, who has been working with the archaeological monument preservation department in Lüneburg for about two years, received the order from there to search for a conspicuous hollow in the ground near the Lüneburg district of Oedeme , where a looted barrow was suspected. It was known that there are several burial mounds in the vicinity and that at Oedeme between 1983 and 1985 a humpback burial ground from the 4th and 5th centuries AD was archaeologically examined. During the superficial inspection with the metal detector on the edge of a field , the probe user found ten gold coins at the specified location . He immediately reported his find to the responsible archaeological monument conservation authority.

The district archeology of Lüneburg of the Lower Saxony State Office for Monument Preservation immediately excavated the site . The work, which lasted more than two weeks, turned out to be difficult because the site was located in the root area of ​​a pine tree ; it could not be impaired for reasons of nature conservation . First the archaeologists created a profile section in order to identify possible earth discolouration in the soil profile . In doing so, they discovered a pit about one meter deep, which had been buried with earth and which had been created by throwing a tree and which had been backfilled by soil from the tree's roots. From the pit with the disturbed bottom, the other finds that were scattered in it were recovered. The exact location is not disclosed in order to protect other archaeologically significant sites in the area.

20 Franc gold coins minted in 1852 with the portrait of the French Emperor Napoleon III.

Found seal of the Reichsbank with imperial eagle and swastika

In addition to the ten gold coins discovered with a metal detector, 207 other gold coins were found during the excavation. They are made of 900 gold and have a total weight of 1.4 kg. With a diameter of 21 millimeters, a gross weight of 6.45 grams and a fine weight of 5.8 grams, the coins are very uniform. These are coins minted in large numbers in the 19th and early 20th centuries, which have since been a standard in the gold business and are still in circulation today as gold investment objects . Their value at the time of their discovery in 2014 was around 45,000  euros . The gold coins were minted between 1831 and 1910 in Belgium (127 coins), France (74 coins), Italy (12 coins) and Austria-Hungary (3 coins). The oldest coin from 1831, like the youngest from 1910, comes from France. The following coins are among the coins:

Other finds were two small seals from aluminum , into which the inscription Reichsbank in Berlin , the number 244 and the symbols of imperial eagle and swastika are impressed. Remnants of fiber from moneybags and remnants of the sealing thread have been preserved on the seals . Such money bags used to be sewn shut and were surrounded by a sealing thread with a seal on the knot. The fabric and the thread are gone due to the decades of storage in the ground. Other finds included tar paper , which has been fragmented due to age.

For the interdisciplinary investigations on the gold treasure, the discovery, carried out under scientific conditions, had an extraordinarily beneficial effect, as most of the hoard finds were torn from their context. Initially, the year 1910 could be assumed to be the earliest time for the treasure to be deposited due to the minting date of the final coin . The latest point in time was the 1960s, as the treasure was under the roots of a 50-year-old pine tree. The seals and the tar paper that were found, which the research group on archaeometry at the Leibniz University of Hanover, led by the chemist Robert Lehmann , allowed for a more precise time limit . Based on its chemical composition, tar paper was manufactured no later than 1970, but probably before 1950. The seals are so-called knot seals made of aluminum, which were developed for the Reichsbank and are based on a patent from 1930. The aluminum alloy of the seals has a chemical composition that is typical of the 1940s. The seal inscription with the number 244 was clarified at the historical collection of the Deutsche Bundesbank . There is a comparison piece from 1940.

The deposit of the gold treasure can be reconstructed on the basis of the archaeological findings and the investigation of the finds. Then two sealed purses from the Reichsbank's holdings, each containing around 700 grams of gold coins, were buried in the sandy soil at the foot of a tree. The bags were wrapped in tar paper to protect them from moisture. The tree later overturned, presumably due to a wind break, and the torn out root ball with earth disrupted the cohesion of the burial. The earth fell over time, filled the pit and a new tree grew on the site in the 1960s. The fact that the sealed bags were buried suggests that it was stolen material that was buried with the intention of retrieving it at a later date. This did not take place for reasons unknown up to now.

The Lower Saxony State Office for the Preservation of Monuments treated the gold treasure according to the right to find it and reported it to the city of Lüneburg as a lost property. It was not possible to return the unearthed treasure to the Reichsbank as the last legal owner, as it had been dissolved in the early 1960s without a legal successor . After nobody made claims to the lost property and the Federal Ministry of Finance refused to accept it, the state of Lower Saxony acquired ownership of the treasure. The transfer of ownership is based on the treasure shelf anchored in the Lower Saxony Monument Protection Act , as the find was certified as having outstanding scientific value. The probe user received a finder's fee of 2500 euros for finding the ten gold coins .

The investigations so far (as of July 2015) allow the conclusion that the treasure was deposited between around 1940 and 1950. According to the Lower Saxon state archaeologist Henning Haßmann , the gold treasure from Lüneburg is the greatest treasure from this era in northern Germany . It is about gold holdings from the Reichsbank, which the two sealed purses speak for. The archaeologist does not assume that the coins were in private possession, as this was forbidden at the time due to the obligation to deliver gold . According to the Lower Saxony State Office for Monument Preservation, the datable finds suggest that they would be buried towards the end of the Second World War or in the immediate post-war period . The details of the circumstances that led to the hiding of the Reichsbank gold are not yet known due to the lack of historical records. At the time of National Socialism there was a branch of the Reichsbank in Lüneburg . The publication of the find should also serve to find contemporary witnesses . The reasons for the burial of the gold treasure can only be guessed at; they could by a high-ranking functionaries of the Nazi regime, such as the Lüneburg NSDAP - Gauleiter Otto Telschow , in the last days of the war or by Allied occupation soldiers have been made shortly after the war.

In July 2015, the Lower Saxony state archaeologist Henning Haßmann announced the find. Also in July 2015, the find was presented for the first time in the Lüneburg Museum with details of the history of the find, an interpretation of the find and a legal assessment. The final whereabouts of the gold treasure are still unclear. It is usual for important finds that are owned by the State of Lower Saxony to be presented in the Lower Saxony State Museum in Hanover. An exhibition on permanent loan at the Lüneburg Museum is also possible.