Hamadan is located in the northwestern part of Iran. In addition to the city of Hamadan, the cities of Twiserkan , Nahavand , Malayer , Assad Abad , Bahar , Razan and Kabudrahang are in the province.

The population is made up of different ethnic groups, including Kurds , Lurs , Persians and Azerbaijanis .

The districts are listed with area and population (2016 census): 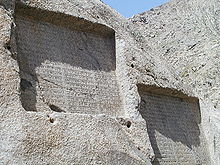 In New Assyrian times, Hamadan was part of the Mannaean kingdom . The capital of the Medes , Ekbatana, is also near today's Hamadan. After the Medes and Persians, the Macedonians ruled Hamadan. After the establishment of the Parthian Empire , the city became the summer residence of the Parthian kings. The Sassanids also used the city as a residence. In 642 the decisive battle between the Sassanids and the invading Arabs took place near Nehawend . With the defeat of the Sassanids, the Islamization of Iran began.

After the Arab caliphs , the Bujids ruled this area. In the 11th century the Seljuks made Hamadan their capital instead of Baghdad . Hamadan was destroyed under Timur Lenk . When the Safavid Empire was founded, the region experienced an upswing. The Ottomans , the Safavids' eternal rivals, conquered the area in the 18th century. However, they had to withdraw after a loss to Nadir Shah . Since then, Hamadan has remained in the possession of the Persians. The region also gained importance due to its location on the Silk Road .

The Iranian Cultural Heritage Organization (ICHO) lists 442 places of historical and cultural importance in the province. These include the following locations: