Hohenstaufenbahn was the official name of the former railway line between Schwäbisch Gmünd and Göppingen . A bicycle and hiking trail has been running along most of its route since 1990 .

The Royal Württemberg State Railways officially introduced the name derived from the Hohenstaufen mountain . An earlier non-official name was Panoramabahn . In the last few decades the popular names Klepperle in the Schwäbisch Gmünder area and Josefle in the Göppingen area became common names.

The 27.24-kilometer standard-gauge branch line overcame an ascent from the Remstal , where it began at an altitude of 319 meters, past the mountains Rechberg and Hohenstaufen in the Swabian Alb . It reached its highest point at the village of Maitis at the foot of the Hohenstaufen at 445 meters and then fell to the Filstal valley to 307 meters. The largest increases were 2.5 percent in both directions and stretch from Schwäbisch Gmünd to Straßdorf and from Birenbach to Wäschenbeuren . The entire route consisted mainly of curves, with minimal curve radii of 200 meters.

The route of today's bike and hiking trail begins in Schwäbisch Gmünd at the southern end of the bridge over the Rems and ends in the Göppingen district of Faurndau shortly before the former Faurndau Nord train station. The connection of the cycle path to the road network takes place in Faurndau via Lehlestrasse.

Development up to the Second World War

After unsuccessful discussions in the 19th century about the construction of a main line between Rems- and Filstal, the Hohenstaufenbahn was built as a branch line from 1907. The section between Schwäbisch Gmünd station and Wäschenbeuren was opened on August 1, 1911, the section between Wäschenbeuren and Göppingen station on May 14, 1912. The declared aim of construction was to close the rural areas between the towns of Schwäbisch Gmünd and Göppingen open up. This was reflected in the high number of stops, even in smaller towns, and the local routing. But the Hohenstaufenring track was also one of the few branch lines in Württemberg who are not as spur track ended was executed, but both sides in major cities and major railway lines. Therefore, it also carried many travelers over the entire length of the route.

As a special feature, the Hohenstaufenbahn ended in the first years of operation, i.e. until April 29, 1917, at the provisional terminus at Göppingen branch line . This was 720 meters west of today's Göppingen train station, between today's Johannes-Scherr-Strasse and Sauerbrunnenstrasse. An introduction of the Hohenstaufenbahn in the old Göppingen station was not possible due to capacity reasons. Only in the course of the expansion of the Göppingen train station between 1914 and 1917 was it possible to take into account the concerns of the Hohenstaufenbahn (and the then still planned Voralbbahn to Boll, which was then put into operation in 1926). After the renovation of the Göppingen station, the provisional Göppingen branch line stop was finally abandoned without replacement.

Until the Second World War , the number of train journeys in the timetable increased steadily. When the Stuttgart-Bad Cannstatt-Nördlingen railway from April to August 1945 was interrupted by bridges from both Waiblingen and Aalen , the transport connections from Schwäbisch Gmünd, Schorndorf and other places depended solely on the Hohenstaufen Railway. 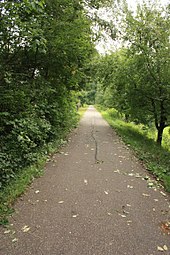 The cycle path on the route of the former Hohenstaufenbahn

Since the post-war period, most of the passenger trains have been driven by Uerdingen rail buses. Supraregional freight traffic was also routed via the Hohenstaufenbahn, for example industrial products from the Filstal.

In the post-war decades investments were made to streamline and accelerate the process. This made it possible to offer the shortest journey time in the history of the route with 40 minutes in the 1980 summer timetable, with stops at all en route stations. The maximum line speed was 50 km / h; For certain trains, individual sections between Wäschenbeuren and Göppingen were permitted for 60 km / h.

A passenger count in 1981 in the Schwäbisch Gmünd – Wäschenbeuren section averaged 387 travelers per day, compared to 1054 between Wäschenbeuren and Göppingen. This reflects the different population densities, the southern section was the busier from the start. Overall, the number of passengers fell from 1974 to 1981 by 22 percent. Because the track and track bed had not undergone any fundamental renovation since the line was built, the condition of the line deteriorated and travel times increased again. The operator, the Deutsche Bundesbahn , asked for millions of euros in aid for the complete renewal of the tracks in order to be able to continue operations. Neither the federal government nor the neighboring districts were prepared to do so, instead they referred to the parallel rail bus service .

Due to the economic problems of the line, the Deutsche Bundesbahn initiated a closure procedure in 1982 and finally - despite protests from the smaller neighboring communities - on June 2, 1984 (start of the summer schedule), passenger traffic on the entire line ceased. The last ride on the Hohenstaufenbahn was accompanied by around 1,000 passengers. Freight traffic lasted a little longer in sections, it was stopped in three stages:

In 1986 and 1987, the tracks on the line were finally dismantled (with the exception of the remaining Faurndau Nord – Göppingen section) in order to be able to create the cycle path. In 1998, the bridge over Stuttgarter Straße in Schwäbisch Gmünd was also dismantled (including the northern bridgehead); it had to give way to the four-lane expansion of federal highway 29 in this section (this crossing was never part of the cycle path). Around 2000, the track in the remaining section to Faurndau Nord was finally dismantled, this section (which runs largely parallel to the two tracks of the Filstalbahn) has been fallow since then.

Dating back to 1909, almost 30 meters long and 60 tons heavy steel bridge over the Rems was in the April 2009 Swabian peasant and Technology Museum in Eschacher transported district Seifertshofen.

The bus line 12 of the bus company Omnibusverkehr Göppingen has been running largely parallel to the railway line since the line was closed, with a travel time extension of a few minutes to 17 minutes compared to the railway in 1980.

Since June 15, 2019, the express regional bus route X93 has also been running between Lorch train station and the ZOB in Göppingen. The connection is offered daily and hourly. The journey time is 28 minutes.

Use as a bike and hiking trail

The town of Schwabisch Gmund and other route residents took over the lying in their respective fields sections of the line, leaving 1988 a paved hiking and biking trail built , the July 7, 1990 as a hiking and cycling trail Stauferland with a Schwäbisch Gmünd Mayor Wolfgang Schuster listed Bicycle column was opened. It became very popular among cyclists and inline skaters due to the route with its many vantage points and the even inclines .

In the regional traffic plan of the Stuttgart region , which was decided in 2001, the possibility of rebuilding the railway line was examined. It was recommended to keep the route clear in the Göppingen– Rechberghausen section without recognizing an urgent need, but not to pursue this option further on. The 2020 regional plan for the Stuttgart region, on the other hand, provides for a complete route clearance. In Rechberghausen, the embankment was removed in 2007 as part of a green project north of the train station and the cycle path was rebuilt.

All station buildings have been preserved to this day. They are used in various ways, for example in Wäschenbeuren as a kindergarten , in Rechberghausen as a theater and Schwäbisch Gmünd Süd as a restaurant .