Herrmann came from a family of teachers and initially had the goal of becoming a primary school teacher . At the latest during his studies in Schwäbisch Gmünd , his creative talent came to light. He found his first job as a teacher in 1914 in Reichenbach am Heuberg . In the First World War he was seriously wounded at the age of just 22 years and was therefore released in 1918. After returning to his old job, he came to Ludwigsburg after a brief interlude in Balingen . Through his work with the male choir, he was encouraged to devote himself to music and used the proximity to Stuttgart to receive the necessary preparation for studying music from the director of the Stuttgart Conservatory at the time, Oskar Schröter . His next position took him to the Hochschule für Musik Berlin , where he studied piano, organ, composition and conducting. His teachers here included Walther Gmeindl and in particular Franz Schreker whose master class for composition he attended. Herrmann earned his living as a pianist and organist, and his first compositions were soon written. After completing his studies, the young composer and musician returned to Württemberg, but the economic crisis forced him to go on a concert tour to the United States with his young wife, who is known as a pianist .

As a concert musician, organist and church choir leader, he could have stayed in Detroit or at least in the USA , but two years later the homesick couple returned to Germany. Despite - or perhaps because of - this impressive experience of an emigrant, these two years were among the most formative and shaped the craft learned during the course into a respectable personal style. In the following years he created "over 90 works of the most varied kinds, each with its own character".

Back in Germany, he settled in Reutlingen , worked as a school teacher and was active as an organist at St. Wolfgang, which also resulted in an initial creative phase for organ literature. But he let his eyes wander outside of the box and strengthened the existing contact with Paul Hindemith , a central figure among German composers at the time. In 1926, through the mediation of Hindemith, he was commissioned to write a composition for the Days of New Music in Donaueschingen . For this purpose, the accordion work “Seven New Game Music” was created, which was to lay the musical foundation stone of New Music for the accordion and established Hermann's lifelong bond with Trossinger Harmonika-Fachschule. In this context, several works for accordion were created in the following years . In 1930 he commissioned the Wiesbaden City Theater to compose his opera “Vasantasena”, for which he received a state award, his second important award after the 1928 Schubert Award. From 1933 he committed himself to the National Socialist regime by composing male choirs and had an arrangement of the Horst Wessel song (NSDAP hymn: "Die Fahne Hoch") for accordion published by Hohner Verlag.

In 1935 he changed his job and from then on worked at the harmonica college. This narrowed the gap between profession and calling, although Herrmann's pedagogical side should not be underestimated either. Nevertheless, he had new opportunities to develop his musical creativity there and enough compositions by Herrmann were received with such great applause that after the seizure of power gentlemen like Otto zur Nedden and State Councilor Hans Severus Ziegler kept an eye on him. Pieces such as the Chorburlesken im Zoo op.73 , a five-part male choir humoresque with a jazz combo, were decisive for a life-changing incident in 1936. On June 17, Walter Schulz - until 1934 director of the State University of Music in Weimar - wanted Hermanns Gamben Concerto op.79 list. The composer came to Weimar on this occasion and found himself listed under the dreaded category Degenerate Artists at an exhibition . The program of the evening only commented on this with “was canceled by Goebbels ”. His name now appeared alongside those of Paul Hindemith , Arnold Schönberg and Igor Stravinsky at the corresponding exhibitions in Frankfurt, Weimar, Düsseldorf and Vienna. “In order to defend himself against this and in the struggle for his professional existence, he took advice from his well-meaning friends to acquire membership of the NSDAP in 1939 in order to obtain a party court case as the only possibility of rehabilitation.” Herrmann became Gauchor leader “Gau Swabia of the German Singers Association ". "Herrmann's relationship to the NSDAP requires some differentiation, since his compositional work was also subject to defamation by the National Socialist press, including being labeled as" degenerate, "which Herrmann fought vehemently and successfully." From 1935 to 1963, Herrmann was director the Trossinger Harmonika-Fachschule (later Trossingen Municipal Music School , today Hohner Conservatory ), although he was on the list of “degenerate artists” in Vienna until 1939. However, due to the course of the war, a procedure that was previously sought became superfluous and in July 1944 Herrmann (like 760,000 other party comrades) declared his resignation from the NSDAP.

A tireless creative urge can be felt especially in the 1920s. Herrmann tries every imaginable genre and processes the musical material in a thoroughly contemporary way. Choir and organ compositions seem to be at the center of his work at this time, which is also explained by his work as an organist and choir director in Reutlingen. In the field of organ composition, his op. 25 from 1926, Five Pieces for Chamber Organ and Percussion , which he wrote for the first organ conference in Freiburg, caused a sensation . Numerous modern style elements are woven in here. Aphoristic brevity characterizes the five movements, which are not free-tonal , but free from narrow tonal references. The use of percussion instruments and jazz-like elements as well as the rhythmic treatment of the organ pedal show the composer at the height of his time. So a lot of this work is found in open width at Leif Kayser in his Concerto per Organo of the 1965th

The Kleine Kammermusik op. 13 seems partly towards historicism and Max Reger , but Hanns Moser sees Herrmann's song in tears for string quartet with soprano from 1924 "at first glance not growing far from Schönberg's F sharp minor piece op. 10". Even the commission from Ernst Hohner for a first genuine accordion work hardly allowed recourse to familiar things. Seven new pieces of music were the result of Herrmann, which was controversially discussed in public. "While the folk musicians marveled at the work as an unusual novelty or rejected it as unplayable, the specialists resented their colleague Herrmann for the apparent slide [...] of what had been achieved so far."

The 3rd Symphony was written in 1949/50 based on pictures of the Rothenburg Holy Blood Altar by Tilman Riemenschneider .

Hermann only numbered his works up to opus 100, which is why many pieces are only given the year of their premiere. 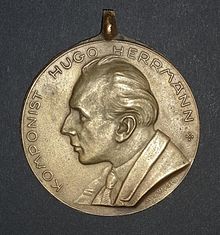 Hugo Herrmann wrote the first composition of a solo work for the accordion. Among other things, he initiated the Pfullinger Chamber Music Festival 1930-1933 and the Mannheim New Choral Music Festival. The choir directing seminars of the Swabian Choir Association , the Hugo Herrmann seminars , are named after Hugo Herrmann .

In addition, he was the founder of the Swabian Composers Association and the German Chord Teachers Association , established in 1953 and based in Frankfurt a. M., of which he was appointed honorary chairman.

In the residential area Huberesch in the Ravensburger Weststadt a street is named after Herrmann. A street is also named after him in the Burgholz district of Reutlingen.