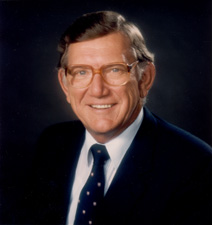 After graduating from high school, Exon attended the University of Omaha until 1941 . During World War II, he served in a US Army intelligence unit . After that he was in an army reserve unit until 1949. His main job at the time was at a financial services company. In 1953 he founded his own company, which specialized in office equipment and soon enjoyed a good reputation nationwide. Exon was a member of the Democratic Party . Between 1964 and 1968 he was vice chairman of his party in Nebraska. From 1968 to 1970 he was a member of the Democratic National Committee . In 1970 he was elected the new governor of Nebraska against incumbent Norbert Tiemann .

Exon took office on January 7, 1971. After being re-elected in 1974, he was able to serve as governor for a total of eight years. This made him the first governor of this state with an eight-year term. During these eight years he managed to set up a balanced budget every year. Through his clever budgetary policies, he also succeeded in winning Republican voters who supported his re-election in 1974. Exon was very popular in Nebraska. He was a member of numerous associations at both state and federal level.

After his second term ended, Exon was elected to the US Senate . He stayed there between 1979 and 1997. Among other things, he was a member of the Senate's budget committee. Exon campaigned unsuccessfully to censor the Internet. John James Exon died on June 10, 2005. He was married to Patricia Pros, with whom he had three children.