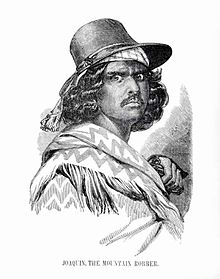 Most biographical sources claim that Murrieta was born in Hermosillo , in the Mexican state of Sonora . However, there are indications that stories about different people were combined into a fictional character of Murrieta.

It is said that Murrieta moved to California in 1849 to make his fortune in the California gold rush . He had experienced racist treatment along with extreme competition in the harsh environment of the mining camps (gold rush camps). While he was panning for gold, he and his wife were attacked by American gold miners who beat him and raped his wife. However, these details go back to the dime novel The Life and Adventures of Joaquín Murieta by John Rollin Ridge and are therefore questionable.

Historian Frank Latta writes in his book Joaquín Murrieta and His Horse Gangs (1980) that Murrieta was from Hermosillo and led a paramilitary gang of relatives and friends. Latta tries to prove that the gang was involved in the illegal horse trade with Mexico and that they helped Murrieta kill at least six of the Americans who attacked him and his wife.

Murrieta and his gang attacked settlers and wagon trains in California, stole horses and drove them along the La Vareda del Monte path through the Diablo Range to Contra Costa County in the Central Valley . The gang is believed to have killed up to 28 Chinese and 13 Anglo-Americans. In 1853, Murrieta was also known to the California State Legislature and was included in a list with the so-called " Five Joaquins " in an ordinance issued in May 1853. The authorities made it possible for a group of 20 California Rangers , veterans of the Mexican-American War, to be recruited for three months . This troop was supposed to hunt " Joaquin Botellier , Joaquin Carrillo , Joaquin Muriata [sic!], Joaquin Ocomorenia and Joaquin Valenzuela" and their gangs. On May 11, 1853, California Governor John Bigler signed a bill that established the California State Rangers . They were led by Captain Harry Love (a former Texas ranger and war veteran).

The state paid the California Rangers $ 150 a month and promised a reward of $ 1,000 if they caught the men. On July 25, 1853, the Rangers encountered a group of Mexicans near Arroyo de Cantua on the edge of the Diablo Range near Coalinga . Three of the Mexicans were killed in the skirmish. The rangers claimed that one of them was Murrieta and another Manuel Garcia , known as the Three-Fingered Jack . Two more were captured. A plaque ( California Historical Landmark # 344) near Coalinga at the intersection of State Routes 33 and 198 today commemorates the incident.

A poster with a picture of the handover of Murrieta's head, Stockton, CA. 1853

As evidence of the death of the outlaws, the rangers cut off the hand of Three-Fingered Jack and the head of the alleged Murrieta and preserved them in alcohol to hand over to the authorities. Authorities issued the evidence in Mariposa County , Stockton, and San Francisco . The Rangers accompanied the exhibition through California; Visitors could pay $ 1 to view the trophies. Seventeen people, including a Catholic priest, signed affidavits testifying to the head of Murrieta, aka Carrillo, as authentic.

Love and his rangers received the $ 1,000 reward. In August 1853, an anonymous observer from Los Angeles wrote to the San Francisco Alta California Daily that Love and the rangers had murdered innocent Mexican Mustang catchers and bribed them for the affidavits. A little later, various Californian newspapers claimed that Love could not have displayed the head in the gold rush camps. On May 28, 1854, the California State Legislature awarded another $ 5,000 reward to the Rangers for defeating Murrieta and his gang.

Two decades later, legends began to form. In 1879 an OP reported to Stidger that Murrieta's sister had testified that the evidence was not her brother's head. Around the same time, various witnesses reported seeing Murrieta as an old man. These statements have never been confirmed. The preserved head is said to have been destroyed during the 1906 San Francisco earthquake and fire that followed, but a head is on display at the Cosmopolitan Hotel in Old Town San Diego and there are suspicions that the trophy has been preserved.

“So many stories have developed around Murrieta that it's hard to tell the fictional from the fact. Apparently they all have in common that the Anglos drove him away from a rich gold digger claim and that in a short space of time his wife was raped, his half-brother was lynched and Murrietta herself was whipped. It may be that he acted as a caraway leaf dealer for a while , then, depending on which version you follow, he became either a horse dealer, or a horse thief, or a bandit. "

John Rollin Ridge , grandson of Cherokee leader Major Ridge , wrote the dime novel in 1854 entitled The Life and Adventures of Joaquin Murrieta, The Celebrated California Bandit , which mainly influenced the legend of Murrieta. Ridge had heard of a Mexican prospector who had made a name for himself as a bandit and had worked out the story for the novel. This novel was translated into several European languages, and a section from it was published in the California Police Gazette in 1858 . This part was translated into French and from French by Roberto Hyenne into Spanish, where the “Mexican” became a “Chilean”, probably for nationalistic reasons or to adapt the story for the Chilean market.

Murrieta's nephew, Procopio , became one of the most famous bandits in California in the 1860s and 1870s; it is said that he set out to surpass his uncle's fame.

Murrieta may also have been part of the inspiration for the character of Zorro , the main character in the five-part novel series "The Curse of Capistrano" by Johnston McCulley , which appeared in Pulp magazine in 1919 . Presumably it is an adaptation of the book by John Rollin Ridge .

Hispanic activists see Murrieta as a symbol of resistance to Anglo-American dominance in California's economy and culture. The Association of Descendants of Joaquin Murrieta declares that Murrieta was not a “gringo eater”, but that he only wanted “to get back the part of Mexico that was lost in the Treaty of Guadalupe Hidalgo .”

Joaquin Murrieta was often picked up as a character: