Johan von Selbach (before 1482–1563) was castellan in Coevorden (NL), Drost von Drenthe (NL), later bailiff in Windeck / Sieg, Marschalck in the Duchy of Berg and in 1542 commander of the armies from the Westphalian region in the Turkish War.

Johan von Selbach had already entered the service of Johan II van Wisch zu Ter Borgh in the county of Zutphen (NL) before 1511 . Van Wisch had sworn an oath of allegiance to Karl von Egmond , Duke of the Duchy of Geldern . Wisch Castle was reinforced with gates, moats, bastions and stakes when von Selbach was there. Under the command of Maarten van Rossum and with other knights from Geldern, von Selbach took part in various campaigns to weaken the opponents of Karl von Geldern.

Johan van Wisch died in 1517 and in June of that year von Selbach entered the service of Karl von Geldern. Von Selbach was (with Johan Golstein) the leader of an army of about 6,000 men, called the "Arumer black heap". It was supposed to support the Frisians in their dispute with Holland . For lack of money, the army had to be dismissed and it was believed that the troops could be relieved by having them crossed by boat across the Zuiderzee to Holland through Pier Gerlofs Donia (Grutte Pier) . In Holland the town of Medemblik was conquered and plundered. Then von Selbach moved with the looting troops along Alkmaar and Haarlem to Asperen (near Culemborg, NL). This little town was conquered and plundered after heavy losses, the population was murdered. September 1517, Henry III hunted . van Nassau-Breda (governor of Holland 1515–1521) moved this army towards Geldern. 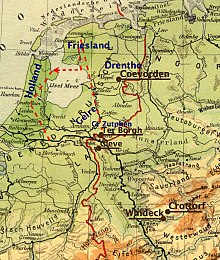 In 1522 Johan von Selbach conquered the Coevorden fortress in the province of Drenthe on behalf of Duke Karl von Geldern . Thus Coevorden became the center of the Duke's power in the northeastern Netherlands. This was a clear signal in the direction of Emperor Charles V , who claimed hegemony over all Dutch provinces for himself. In 1522, Johan was appointed Drost von Drenthe and Castellan of Coevorden. Von Selbach (in Drenthe van Selbach) was often involved in arbitrations as Drost. He was also responsible for the defense of the province and strengthened the Coevorden fortress considerably. He was also eager to collect taxes, but there wasn't much to get in poor Drenthe. The map by Sebastian Münster , around 1570, contains the note "Ein ruch Land" near Drenthe.

Charles V and the governor of Friesland, Georg Schenck von Tautenburg , who had been appointed by him in the meantime , had not remained inactive after 1522. There was a little war between Geldern and Utrecht and Tautenburg therefore invaded the province of Overijssel in 1527 . Karl von Geldern had to cede Overijssel to Emperor Karl V in 1528, but was allowed to keep Drenthe and Groningen (for the time being) . In September 1536 General Schenk von Tautenburg succeeded in conquering Coevorden Castle for Charles V after a two-month siege. From a report by Picardt around 1650: "In 1536 the Vry-lord Georg Schenck, city governor of Vrieslandt, on behalf of Caroli V, besieged Covorden when there was Mr. Johan van Selbach, who was in command there, Geldersche Drost zu Covorden in the Drenth countryside , and High Commander over secure Gelders troops. And although the commandant and the Guarrison defended themselves male, they were forced to give up Covorden for the winter due to lack of various things: And in this siege the city of Covorden is again very deprived and harmless made ".: Johan von Selbach was granted an honorable deduction: he was allowed to leave Coevorden with soldiers, moving cannons and personal property" both clothing, valuables, gold and silver, as coins or raw, horse and armor ". Mutual prisoners were released. Horses and wagons and an escort were made available for the transport to Geldern. Johan had been Drost von Drenthe for 14 years to the day.

After the death of Karl von Geldern in 1538, Geldern passed to Cleve in accordance with the contract . Jülich, the Duchy of Cleve and the Duchy of Berg had meanwhile been inherited by Wilhelm V , Duke of Jülich-Cleve-Berg and Count von der Mark . Johan returned to the Siegerland and became Drost at Burg Windeck an der Sieg (on the southern edge of the Duchy of Berg). He was in office from 1542–1549. "He received official money of 100 florins, 300 quintals of oats and tithes. For this he had to employ a chaplain, a waiter, a baker, a cook, a messenger, a porter and four guards". He lived again at Crottorf Castle , about 30 km NE of Windeck.

Johan von Selbach held the position of "Marschalck" at the court of the Duchy of Berg. With his experience in administration and war, in 1538 (Crottorf was a fiefdom of Nassau) he was also councilor at the court of William the Rich of Nassau-Dillenburg (brother of the aforementioned Heinrich III of Nassau-Breda). In 1542, William the Rich from Nassau commissioned Johan to lead the Nassau army contingent in the new Turkish war (which the Reichstag had decided in 1542 ). He probably also led the contingents from Jülich-Kleve-Berg and from Münster . He was therefore Colonel of all troops from the Lower Rhine-Westphalian Empire . The aim of the Turkish war that year was to recapture Budapest.

After his return, Johan von Selbach continued to run the business as a bailiff and actively managed Crottorf, as evidenced by many files / documents. He bought goods, there are fewer documents for sales. In 1549 he resigned from office.

Now, around 70 years old, he began to convert his castle seat. After 10 years "Crottorf Castle presented itself as a strongly fortified two-wing building with three storeys, the external works of which are still in place today. Two bastions, at the northeast and southwest corner, are shown on one view as mighty round towers". The type of major renovation carried out by Johan von Selbach was certainly influenced significantly by his previous experience with the renovation and siege of fortresses. At Crottorf, for example, all towers, including those of the castle itself, were provided with mouth notches at a strategic height .

In 1554 Johan obtained the " imperial estate " from Emperor Karl V for him, his wife, the servants, castle and rule of Crottorf.

Detail from a photo of the tombstone Johan von Selbach (+1563); Marienstatt Abbey

Johan fell ill at the end of 1562. He died at the beginning of 1563, over 80 years old, and was buried (as he had already prepared in 1542 before his Turkish war and confirmed in his will in 1561) in the Marienstatt Abbey near Hachenburg . Due to his donations to the abbey in 1542, he was also "Knight of the Monastery". The text on the cast-iron grave slab (he probably arranged for it to be made early on) reads: "ANNO 15 .. THE ... DAY OF .... THE NOBLE VND ERNVESTE JOHAN VON SELBACH MARSCHALCK ZV CRVTTORF WHO IS SELE GOT RECEIVED ". The exact date of death could not be added afterwards.

1. Johan van Selbach (* around 1510) (out of wedlock). He became Drost zu Emmen (Prov. Drenthe, Netherlands). He died at the same age as his father. He is the progenitor of many van Selbachs in the Netherlands. A street in Emmen is named after him.

2. Maria van Selbach (* around 1510). She married Roelof van Münster ( Herzford Castle ), grandson of Roelof van Münster, Drost von Drenthe (1505–1512). Maria lived with her husband on house "Den Ham" near Loppersum , Province of Groningen (NL). She died in 1578. In the Petrus and Paulus Church in Loppersum, her large tomb with the coat of arms of her ancestors is the showpiece of the old tombstones collected.

3. Henrick von Selbach (* around 1515; † 1561). He came to Crottorf in 1538. He married Johanna von Hatzfeld-Weisweiler there in 1541. They had a daughter, Judith. Judith and her husband, Johann von Lutzerath / Lützenrode, inherited the Klarenbeck estate and house near Kleve from Judith Smullinck , which has been bequeathed for centuries. Johann von Lutzerath " zu Vorst " (near Frechen) also became a bailiff at Windeck. There is a tomb with coats of arms for Judith von Selbach and Johann von Lutzerath in the St. Audomar Church in Frechen (Rhineland).

5. Katharina von Selbach (* around 1547). She married Wilhelm von Hatzfeld in 1559. This couple inherited the goods in and around Crottorf and they founded the Hatzfeld-Wildenburg-Crottorf line . Katharina gives birth a. a. the son Sebastian von Hatzfeld, who built a large grave monument for his grandfather Johan von Selbach, who died in 1563, and for his parents in the church of Sankt Sebastianus zu Friesenhagen (Crottorf belongs to the parish) around 1600 .