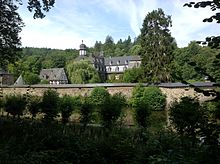 East view of the castle

Gate construction of the castle

The Crottorf Castle , occasionally Castle Krottorf written is a moated castle in Wildburger land two kilometers west of the town Friesenhagen in the same community , in the district of Altenkirchen in the north-east of Rhineland-Palatinate and near the border with North Rhine-Westphalia is located. It stands in the valley of the Wisser on the foundations of a medieval moated castle, which was first mentioned in the first half of the 14th century.

The name Crottorf has been documented since 1261 with the knight Ludwig the Black of Crottorf, a feudal lord of the noble lords of Wildenburg , but a complex of the same name is only mentioned in 1326. At that time it was a fiefdom of the Counts of Sayn and owned by the brothers Johann and Arnold von Selbach , sons of the knight Eberhard von Selbach mentioned in a document in 1288. The knights of Selbach succeeded in breaking their residence from their feudal dependence and making it their allod . The childless death of Hermann von Wildenburg in 1418 gave them the opportunity to do so. Through his sister Jutta, who was married to the knight Johann von Hatzfeld , the inheritance came to her son Godhard, but the family had to assert their claim against the Counts of Sayn, who wanted to move in the direct imperial rule Wildenburg as a settled male fief. In the 18 years of conflict, the Selbachers were loyal to the Wildenburgers, so that four years after the death of their father, Godhard's sons Johann and Ludwig married their sister Katharina in 1424 “out of favor and friendship” with Christian von Selbach zu Crottorf and the bride the Crottorf farm with the associated lands as dowry.

Christian's grandson, Johann von Selbach , Marshal of the Duchy of Berg , had the farm converted into a handsome moated castle around 1550. Previously, the complex probably only consisted of a simple castle house ( permanent house ) with two to three storeys, which was surrounded by a moat . After the expansion, Crottorf presented itself as a strongly fortified two-wing building with three storeys, the external works of which are still in place today. Two bastions at the north-east and south-west corner are shown as mighty round towers in a view that was created around 1600 . Johann married his only daughter and universal heiress Katharina in 1559 to Wilhelm von Hatzfeld zu Wildenburg. The couple founded the Hatzfeld-Wildenburg-Crottorf line. Wilhelm took over the inheritance in Crottorf after the death of his father-in-law in 1563. His son Sebastian I had his grandfather's facility expanded into a three-wing complex in two construction phases from 1605 to 1607 and from 1619 to 1622. During the work, a counterpart to the round south-west tower built before 1600 was built on the southeast corner. Previously, Sebastian had the ring wall towards the end of the 16th century its present appearance with covered walkway over a round arch frieze given. However, during the Thirty Years War, the wall could not prevent marauding Swedish soldiers from taking the castle in 1631. In 1635 the von Hatzfeld family's Crottorf line was elevated to the status of imperial count , and in 1748 even to imperial princes .

Ink drawing of the castle by Renier Roidkin , around 1725

After Sebastian I's death, his son Melchior succeeded him as the castle owner, who was inherited by his younger brother Hermann von Hatzfeld. He resided at Castle Haltbergstetten in Middle Franconia , so that the Crottorf complex played no role as a residence until 1665. From the mid-1660s, however, Hermann had the palace rebuilt and expanded in the Baroque style. The north wing of the high castle received two more round corner towers, so that all corners of the main building were now occupied with towers and thus corresponded to the baroque ideal of symmetry. In addition, the lord of the castle engaged the Italian plasterer Giovanni Domenico Rosso, who was responsible for the interior decoration of various rooms, such as the valuable stucco of the former hunting room, which today serves as a vestibule . The renovation work was only completed under Hermann's son Sebastian II. The last new building to be built was the huge gate tower from 1684/85. In the period from 1720 to 1722 the main building was modernized. The later for the Cologne Elector Clemens August of Bavaria in Brühl plasterer working Giuseppe Artario paid at the same time the large ballroom of the castle with a stucco ceiling in the style of Regency from. With the death of Count Lothar Franz von Hatzfeld in 1722, however, Crottorf Castle lost its function as the main residence of the family, as the heir Franz von Hatzfeld mainly resided in Trachenberg, Lower Silesia . The widow of Sebastian II, who died in 1708, Anna-Elisabeth von Kesselstadt, lived in the castle until 1726, but then the facility was rarely used. An ink drawing by the Walloon painter Renier Roidkin shows it around 1725.

With Prince Friedrich Cajetan, the Crottorf line of the family, which had called itself Hatzfeld-Gleichen-Trachenburg since the 17th century, died out in 1794. The ownership came in equal parts to the von Hatzfeld-Werther-Schönstein and von Hatzfeld-Wildenburg- Weisweiler families , and in 1830 they finally became sole ownership of the latter line. 40 years later it was prince. Paul Hermann von Hatzfeldt -Wildenburg and his wife Maria von Stumm had Crottorf Castle renovated from 1923 to 1927 , as a memorial plaque in the gateway of the high castle commemorates. With their son Franz-Hermann Fürst von Hatzfeld-Wildenburg, the line died out in the male line in 1941. After the death of his mother, the palace complex came to Franz-Hermann's sister Ursula in 1954. In 1969 she left the property to her nephew Hermann Graf Hatzfeldt -Wildenburg-Dönhoff, whom she had previously adopted .

Site plan of the palace complex

Crottorf Castle is a two-part complex, consisting of a high castle and an outer bailey to the southwest . The two building complexes are located on two islands connected by a multi-arch bridge, which are surrounded by an inner castle moat. Outside this moat there is a lawn terrace on all four sides, which was once the castle wall. There is a two-story pavilion tower on the long eastern side , the only remaining relic of the former baroque garden parterre .

On the long eastern side of the lawn terrace is a monument by Alexander Liberman in honor of those who were executed in the assassination attempt on Adolf Hitler , which Die Zeit co-editor Marion Gräfin Dönhoff, who died on March 11, 2002 in Crottorf, had installed there in 1990. The abstract sculpture with the inscription "The friends July 20, 1944 for a memorial", the name Peter Yorck von Wartenburg , Adam von Trott , Friedrich Werner von der Schulenburg , Heinrich von Lehndorff , Kurt von Plettenberg and Nicholas of Üxküll on .

The entire lock area is surrounded by a 176 × 120-meter lock pond and is on all sides by a ring wall with embrasures edged, which on the southwest and northeast corner bastion like is formed. Your arched frieze on the outside marks the level of the encircling, roofed battlement. There used to be a three-wing farm building to the south of the pond, which was built between 1712 and 1714, but was demolished again in the second half of the 19th century.

The castle courtyards and the outdoor facilities can be visited for a fee, but the interior is not open to visitors.

Gate passage of the outer bailey

A 45 meter long, seven-arched stone bridge leads in the south over the castle pond to the massive gate of the complex. However, the arch bridge does not span the entire width of the water, so that a last, small piece is overcome by a lowered wooden drawbridge . The square gate tower has three floors, which are covered by an eight-sided, kinking helmet . This was restored after a fire in 1909 and has a closed lantern with a clock at the top. Iron wall anchors on the outside of the tower date it to the year 1685, making it the youngest building in the palace complex. More iron armature in the form of the letters have SGVHVZGHZW S ebastian G raf v on H atzfeld u nd z u G offset, H err z u W ildenburg as client from. The coat of arms of the von Hatzfeld family is emblazoned in stone above the arched driveway with a drawbridge panel surrounded by bung blocks.

Via another stone arch bridge over the inner castle moat, the visitor reaches the arched entrance in the single-storey south wing of the U-shaped outer bailey, the three wings of which now house apartments and garages. The horseshoe shape is open to the north to the main castle and has two low round towers at the two southern corners to defend the entrance. The towers are covered by eight-sided, almost conical helmets, the weather vanes of which show the years 1671 and 1678. In contrast to the south wing, the west and east wings of the outer bailey are two-storey and each have a half-timbered upper storey . The first floor of the east wing dates from the 15th century and is equipped with two half-timbered bay windows from around 1675. An 18th century sundial is mounted on one of them . The north side of the outer courtyard is bounded by a low wall.

The main castle of the castle, west side

The core of the three-winged main castle dates from the 16th century. Its two floors of quarry stone masonry rise on a high basement with loopholes and are closed by mansard roofs from the 1920s. The four corners of the building are marked by massive, three-storey corner towers with a diameter of 8.30 meters. Its polygonal , slate-covered Welschen hoods are crowned by closed eight-sided lanterns and date from the end of the 18th century. The two floors of the two southern towers are clearly separated from each other by a round arch frieze. The frieze continues on the outside of the south wing, giving it a horizontal structure. There you will also find the arched portal of the main castle, which was given its current shape, based on the gate of the outer castle, during a thorough renovation in the 1920s. A stone tablet on the right side of the gateway reminds of this. Opposite it is the main entrance to the main castle, which was created at the same time. On the courtyard side, the south wing on the ground floor has a flat arched arcade in the Renaissance style . In the middle above there is a console stone decorated with lion heads , which used to have a bay window . The courtyard-facing facades of all wings show rectangular twin windows with basalt and sandstone walls . The most striking feature of the north-east wing is its arched entrance, framed by a wide sandstone panel, to which a staircase newly built in 1927 leads.

While the building wings in the north-east and south are only one room deep, the north-west wing is two rooms deep. There is the four-window ballroom on the first floor on the courtyard side. It also forms the connection between the two other wings. One of its four doors on the west wall leads from the hall to the palace chapel , the three-sided apse of which protrudes noticeably from the line of the outer facade. The chapel has a three-winged carved altar from the first half of the 16th century and a bronze baptismal font from 1620.

Castles and palaces in the district of Altenkirchen (Westerwald)