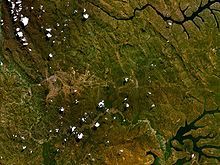 A market in Kigali

Kigali [ kiˈgaːli ] is the capital and largest city of Rwanda . It is located in the center of the country on the Kagera at an altitude between 1433 and 1645  m . Kigali is just south of the equator , due to this location the climate is very mild all year round. The province of Kigali consists of the three districts of Gasabo, Kicukiro and Nyarugenge.

Kigali has been the cleanest capital in Africa since 2015.

Due to the increasing urbanization of the country, the population is growing rapidly. For 2050, a population of 4.5 million people is expected in the agglomeration.

Kigali was founded in 1907 by the then German resident Richard Kandt as the seat of the Rwanda resident of German East Africa on a hill between the Nyabarongo river valley and the Jali and Kigali mountains . In April 1908 the brick building of the residence was inaugurated. Indian and Arab merchants quickly settled in Kigali. They built their shops north of the German residence near what is now Nyarugenge's main market.

In 1910, 873 small caravans with 13,519 porters were counted in Kigali by the German residency; in 1912 there were already 1784 caravans with 23,971 porters. In 1912 there were already around 40 independent merchants and companies in Kigali with 24 branches in Rwanda. Six of the firms were European companies. In addition, Rwandan merchants of the Hutu people visited the market in Kigali with pelts and hides, which they bought in exchange for fabrics and pearls in exchange for the pelts and hides of the peasants. In 1912 the European trading companies East African Trading Company and Internationale Handelsgesellschaft jointly set up a laundry for hides in Kigali.

Since the beginning of the First World War in August 1914, military fortifications were built in Kigali to protect the resident's seat. When the German troops withdrew from Rwanda to Tanzania in May 1916, Kigali was occupied by the Belgians without a fight. In 1922 the city was placed under the Belgian League of Nations mandate as part of the Rwanda-Urundi Territory .

After the division into the independent states of Rwanda and Burundi in 1962, Kigali became the capital of Rwanda.

The 1994 genocide of the Tutsi in Rwanda began in Kigali. The city lost around 100,000 inhabitants, while in all of Rwanda around a million people died in genocide in just 100 days. 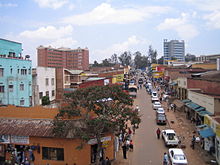 The economic basis is the trade in coffee , cattle and tin ore , which is mined nearby, as well as the textile, chemical and tin processing industries around Kigali. Mara has had a factory for smartphones for the African market since 2019 .

With the Kigali International Airport, the city ​​has an international airport with daily connections via Nairobi and Addis Ababa to Europe and important African countries. Kigali is on a trunk road that connects the city with Burundi in the south and Uganda in the north. Right-hand traffic applies on the roads.

In August 2015, a street in the center of Kigali was declared a car-free zone.

Kigali is the seat of a technical college and has several English-speaking schools and a French-speaking Belgian school.