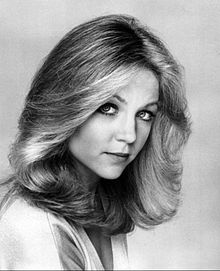 Lisa Hartman (born June 1, 1956 in Houston , Texas ) is an American actress and singer , best known for her role as Ciji Dunne in the Dallas spin-off Under the California Sun.

Lisa Hartman's mother, Jonni Hartman was a successful producer in the TV and music business, her father Howard Hartman made a name for himself as a baritone singer and actor locally and nationally in the USA in the 1950s and 1960s. Lisa Hartman has an older sister. Jonni and Howard Hartman divorced when Lisa was nine years old.

Lisa Hartman accompanied her father on many of his performances and performed as a child; whether as a singer of the Christmas song The Christmas Train (1961) or as an actress in smaller theater -Stücken and scenes. In 1962, at the age of six, Hartman appeared in her father's stage program as a singer and received standing ovations from the enthusiastic audience for her interpretation of the song Hello Darling . In 1963, seven-year-old Lisa Hartman appeared in an anti- tuberculosis commercial alongside the famous John Wayne . Her parents soon recognized their daughter's talent and enabled her to attend a school at the "High School for the Performing and Visual Arts" in Houston . There the available resources should be promoted and the musical talent further developed.

In the course of her studies, Lisa Hartman took part in numerous theater plays and set her acting accents in the field of fairy tale productions for children and young people. Her major acting successes during this time include Cinderella and the war and anti-racism drama South Pacific . But she also remained true to her second passion, music, during this time: Lisa founded the rock band Lisa Hartman and Four Grand in 1972 , with whom she performed in various Holiday Inns and on cabaret stages. Songwriter Dene Hofheinz became aware of the artist during one of her performances in 1974 and introduced her to record producer Jeff Barry a little later .

Barry was convinced of the talent of the young singer and signed her to Kirshner Records in 1975 . In March 1976, Lisa Hartman's debut album, titled Lisa Hartman, was released . Despite numerous good reviews, which praised Hartman's soprano voice as well as the colorful mix of songs and sensitive interpretation of the ballad rock songs, the album was not a success. One of the songs included, the Hartman co-written, dramatic ballad He Ain't You was recorded by country singer Lynn Anderson for her 1977 album I Love What Love Is Doing To Me / He Ain't You . As a single, Anderson reached number 19 in the US country charts.

Hartman took on various television roles and made his debut in December 1976 in the television series Police Woman , was seen in several television films, and then took the title role in the sitcom Tabitha (1977-1978), a spin-off series for the 1960s classic In Love into a witch .

By the early 1980s, Lisa Hartman published various singles and the solo album Hold On (1979), was a guest in various family series such as Love Boat and Fantasy Island and played mostly young, successful singers in several television films. Although she tried to market her second album on this occasion, she did not have a musical breakthrough.

Hartman got her first film role in 1978 in the independent film Just Tell Me You Love Me , which initially did not find any distribution and was only broadcast in 1980 with moderate success. The five-part TV series Das Tal der Puppen from 1981, based on the bestselling novel by Jacqueline Susann, helped to achieve a more commercial television presence . Lisa Hartman took the opportunity of this role to market her new solo album Letterock (this time with the record label RCA ) by singing some songs from it as a neurotic rock singer Neely. On this album Hartman showed himself for the first time from a rocky side.

After appearing alongside Sharon Stone in Wes Craven 's Deadly Blessing (1981), Lisa Hartman was offered the role of singer Ciji Dunne in the hit Dallas spin-off Under the California Sun ( Knots Landing ). Actually, she was hired as a guest star of the 4th season (1982-1983), but nobody suspected the success Hartman would have with her interpretation of the tragic role of Ciji Dunne .

Letterock was re-released with the title Lisa Hartman - Singing Star of Knots Landing , sold relatively well, the ratings of the series rose to 19 million viewers and brought the series for the first time a top 18 position in the Nielsen ratings . Due to the audience response, Hartman was brought back to the soap opera as a permanent lead actress after her serial death in 1983 . Now she played the singer Cathy Geary , took the chance to cover numerous pop songs from the 80s and worked alongside acting partner Alec Baldwin in the series until 1986 . In the meantime she took part in the movie Where The Boys Are '84 and in the spring of 1984 she shot the war drama The 17th Bride in Wasserburg am Inn and Israel . This film ran beyond the cinematic mainstream in art house cinemas and is a free film adaptation of the novella The Bride by Ladislav Grossman .

Lisa Hartman next began recording a new solo album, which was released on Atlantic Records ( Warner ). `Til My Heart Stops was released on vinyl in 1987 and on CD in 1988 .

Lisa Hartman remained loyal to acting and appeared in several major television roles through the late 1990s. In 1990 and 1991, for example, she took part in eight larger films such as the miniseries 2000 Malibu Road by Joel Schumacher with Drew Barrymore and Jennifer Beals , and in the drama Herz in Fesseln , which was one of the most successful American television productions in 1993.

On October 20, 1991, Lisa Hartman married the successful country singer Clint Black on his farm in Houston , Texas . They both have a daughter who was born on May 1, 2001.

Hartman and Black stood together in the 1998 television film Cadillac Jack: A Cowboy Never Gives Up in Front of the Camera and also appeared as a duo partner. Be it in the former war and crisis area of Somalia , where both gave a concert for the US troops stationed there in the spring of 1993, or as an artist of the Rock Artists Against Drunk and Driving against alcohol consumption at the wheel. The country ballad When I Said I Do finally marked a surprisingly positive, albeit late turn in Lisa Hartman's musical career: the duet together with her husband reached the top 1 of the country billboard charts on December 4, 1999 and stayed for several months in the charts. In addition, Hartman and Black received a Grammy nomination for this and were honored with the coveted trophy of the Academy of Country Music Awards as Vocal Event of the Year in May 2000 .

Lisa Hartman now pursued her musical career again, went on tour with Black and recorded another duet as Lisa Hartman-Black in 2001: Easy For Me To Say appeared on Black's Greatest Hits II and found its way into the top 20 of the country Billboard charts.

In 2005 Hartman first appeared in a new television production ( Back To You And Me ).