Louis Sclavis (born February 2, 1953 in Lyon , France ) is a French clarinetist , saxophonist , composer and band leader . He is widely regarded as one of the most important European instrumentalists, especially on the bass clarinet. Sclavis is also active as a film composer.

At the age of 9, Louis Sclavis took clarinet lessons and played in a local brass band before graduating from the Conservatory of Music in Lyon. From 1975 to 1988 he joined the Lyon music collective Association à la Recherche d'un Folklore Imaginaire (ARFI) and played with well-known groups in the local scene such as Workshop de Lyon , Marvelous Band and Marmite Infernale .

In 1982 Louis Sclavis founded his first band called Le Tour de France , made up of six musicians from all over France. In 1984 his first solo album followed with the title Clarinets . In the same year he began a long and successful collaboration with the double bass player Bruno Chevillon in a quartet with François Raulin and Christian Ville . This formation made a name for itself as a popular festival band in the following years. At the same time he played with Jacques Di Donato and Armand Angster in the Trio des Clarinettes . 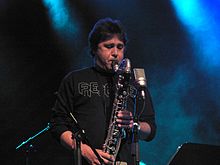 In 1987 he founded the Louis Sclavis Septet , which also appeared at numerous festivals, e.g. B. the Grenoble Jazz Festival . His quintet emerged from his trio with Bruno Chevillon and François Merville , with which he released several albums on ECM Records . British, German and American musicians from the improvisation scene have been Sclavi's musical partners from the start. The collaboration with Chris McGregor , Peter Brötzmann , Evan Parker , Conny Bauer , Heinz Becker , John Lindberg , Michiel Braam , Tony Oxley , Jean-Pierre Drouet , Bernard Struber , Andreas Willers or Gabriele Hasler has been documented on various CD releases. He regularly revived the successful Carnet des Routes trio with Henri Texier and Aldo Romano , whose appearances in Africa were documented by Guy Le Querrec for the CD booklet. The album Silk and Salt Melodies , recorded by an extremely sound-conscious, meticulous and virtuoso grooving quartet, made it onto the list of the best of the German Record Critics' Prize in 2014 .

Louis Sclavis has been one of the active focal points of the French jazz scene since the 1980s, together with such well-known artists as Bruno Chevillon , Marc Ducret , Michel Portal , Yves Robert , Michel Godard , Dominique Pifarély and Jean-Louis Matinier . From art music and folk music, Sclavis forges slightly catchy music according to the ARFI concept of " imaginary folklore ", which is packed rhythmically and includes both a lively cheerfulness and a deep melancholy.

In 1988 Louis Sclavis received the Prix ​​Django Reinhardt , an award given annually to the best French jazz musicians. The British Jazz Award followed in 1990 , and in 1996 he received the National Music Prize from the French Ministry of Culture. His album Ellington on the Air was awarded the Django d'Or in 1993 as the best French jazz album . His album Sources was included in the quarterly best list of the German Record Critics' Prize in 2012.

“It goes without saying that Louis Sclavis' music always impresses with the fact that it does not copy any American models and yet retains a lightness that is deeply rooted in the soil in which it is created. Sclavis meets all the criteria for the jazz rating, and yet his music is nothing less than Afro-American. ... With his band, the clarinetist achieves the highest level of motivated interaction, which is pervaded by group-serving solos. ... No solo takes place just for the sake of the solo, everything has a predetermined place in the whole. "

“Nowhere is jazz more lively than on the fringes. From there it renews itself, and in the end it does not matter whether this music is still called that at the end - auxiliary term has always been the word that many of its protagonists wanted to seem a nonsense. Louis Sclavis is the most jubilant example of this. "