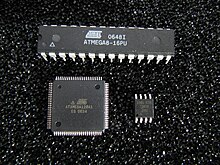 Microchip AVR (formerly Atmel AVR) is an 8-bit microcontroller family from the US manufacturer Microchip . The controllers of this family are also widely used by hobby users because of their simple structure, easy programming, free development tools and availability in DIP housing designs. The microcontroller family was developed by the former US company Atmel; according to the company, the name AVR is meaningless.

The types are divided into groups

Under the name AVR32 Atmel has a 32-bit - RISC - architecture with DSP and - SIMD developed functionality. Despite the similarity of names and logos, the two architectures have little in common. 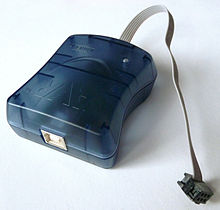 Almost all types can be programmed via SPI via an ISP (AVR ISP, In-System Programmer ), which can be connected to the serial , parallel or USB interface of a PC via a simple programming adapter . The specialty lies in the possibility of not having to remove the processor from the target circuit. Instead, it can be reprogrammed when it is installed. An AVR chip can also be programmed using an HV programmer (high voltage programmer), the voltage of which is 12 V. This is necessary if the reset pin required for the ISP interface has been deactivated by setting the fuse bits - for example to use it as an I / O pin due to the lack of free pins - and the chip can no longer be programmed via an ISP .

Newer types also have a debug interface which, in the case of smaller controllers (ATtiny series and 32-pin ATmega family), only requires the reset line in addition to the supply lines ( debugWIRE ). With larger controllers of the ATmega family, on the other hand, it is easier to do without several pins (6), so that a JTAG interface is used here. With this, a program downloaded into the microcontroller can be examined in a specific hardware environment using additional hardware / software according to the IEEE standard 1149.1 , and any programming errors can be removed (debugged).

One advantage over other microprocessor families is that, thanks to the RISC architecture, most register commands can be processed within one system cycle, with the exception of jump and multiplication commands and access to the memory interface (including RAM and I / O ports). Thus this architecture is very fast compared to others.

Thanks to the hardware design based on high-level languages ​​such as C , even compilers can generate very efficient code; the developer does not necessarily have to go to assembler level. The design of the ATMEGA8 was already optimized during the development of the chip for C compilers.

However, as with many other microprocessors with integrated program memory , the binary program code is executed directly from the flash memory . As a result, especially with the chip versions for low supply voltages of less than 3.3 V, the processor core has comparatively low maximum clock rates of mostly less than 10 MHz. Since the frequency corresponds almost 1: 1 to the IPS , a maximum of 10 MIPS can be achieved. It is not possible to operate the internal processor core using a PLL with a clock rate that is higher than that of the external clock. This restriction is due to the integration of the flash memory technology. For comparison: microprocessor architectures like the Blackfin , which copy the program code from the non-volatile flash memory to an internal SRAM memory before execution , have clock rates of the processor core of over 500 MHz with supply voltages of the CPU core of less than 2 V at in about the same low power consumption.

In contrast to the PICmicro processors, the AVR instruction set was kept compatible across all models - apart from the AT90S1200 with a restricted instruction set and the ATmega with a slightly expanded instruction set. However, there are minor differences in the scope of commands due to different flash sizes, bootloader support, multiplication commands (from Mega), the hardware equipment, etc.

The AVR processors are designed for the efficient execution of compiled C code. Even before the AVR core was completed, the development of a C compiler began in order to identify potential for optimization, for example:

The AVR microcontrollers require supply voltages between 1.6 V and 5.5 V. Depending on the type, they can be operated with external crystals up to 32 MHz and offer the following peripherals, among others: ADC , timer , watchdog , UART , two wire interface (I2C) , SPI , CAN , USB , display interface, touch controller, analog comparators and external interrupts. The configuration of some peripherals and processor functions, such as the external clock generator, the bootloader, the watchdog timer or a read-out block for the program memory, is not carried out in the program code, but via separately set fuse bits.

Nomenclature of the model variants

All real AVR microcontrollers from Microchip (except AVR32) have the following nomenclature :

Current module as an example: * ATmega48PA-AU *. The name consists of five parts:

There are only three rows: the small ATtiny with a reduced range of functions and the large ATmega and AT90 models with special functions.

While the size of the flash memory (program memory) is specified directly in the name, the size of RAM and EEPROM is only indirectly derived from this number, whereby typically the components with large flash also have more RAM and EEPROM than smaller ones. This assignment roughly applies:

The number (s) after the flash size indicate the features of the module. The following table applies to the ATmega series:

From this list, some building blocks stand out as outsiders:

The two letters after the hyphen provide information about the design. The number of pins of the respective housing type depends on the component.

The numbering of the ATtiny modules is much more confusing than in the ATmega series. As with ATmega, the first digit indicates the size of the flash memory. The above tables for series, design, revision and memory size also apply (exceptions: ATtiny5 with 0.5 KiB Flash and ATtiny4 and ATtiny9 with 0.5 or 1 KiB Flash). The additional functions and size do not appear from the designation.

Follow the same nomenclature as ATmega, only replacement of the series by AT90 plus special function (PWM, CAN, SC or USB).

The storage management follows the guidelines of the Harvard architecture . So there are separate address spaces for the flash memory , the RAM and the EEPROM . In contrast to simpler microcontrollers, the AVRs have 32 registers with which operations can be carried out directly, but not all registers have the same scope of performance. The Tiny types in the very small SOT23-6 housing (ATtiny4, ATtiny5, ATtiny9 and ATtiny10) only have 16 registers. 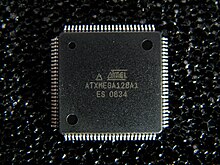 AVR XMEGA are microcontrollers with extended peripherals and functions based on the 8-bit AVR architecture.

Some interfaces have been improved and are now mostly available multiple times, for example SPI, TWI and USART. The interrupt system has been revised. A so-called event system allows incoming interrupts to be forwarded directly to peripheral units without requiring additional processor computing time ( hardware routing ).

According to Atmel, the components of the XMEGA series are compatible with the existing AVR components in terms of the instruction set. Within the XMEGA series itself, all of the respective housing shapes are pin, source text and binary code compatible, but the supply voltage has been reduced to 3.3 V (max. 3.6 V), so that an exchange in an existing design is only possible if if this voltage is also available here and the other components can also work with 3.3 V port voltage.

These are derivatives of the AVR32 architecture mentioned above. It is a 32-bit controller that only has the same name as the 8-bit architecture discussed in this article.

There is also a large number of free development tools, such as B. the GNU tools ported for AVR cross compiling WinAVR or avr-gcc , AVR-LibC.

Finally - rather unusual for microcontrollers - there are the proprietary BASIC compilers BASCOM and LunaAVR .

In principle, only a few components are required to easily develop and program a circuit with an AVR. Nevertheless, beginners in particular appreciate so-called development or evaluation boards (development boards), which offer peripherals (LEDs, switches, etc.) in addition to the AVR . Atmel itself offers corresponding official boards (STK200, STK500, STK600) that can be used universally for several types. In addition, there are separate boards for special controllers, such as the “Butterfly” and the various “XPlained” boards. Various providers offer inexpensive alternatives.

In recent years, the open source Arduino platform based on the AVR has been particularly popular, as it enables beginners and non-specialists such as artists and designers to use microcontrollers without in-depth technical knowledge.