The Minimoog is an analog, single-voice ( monophonic ) synthesizer from Moog Music .

It was developed in the USA by the synthesizer pioneer Robert Moog , presented to the professional world for the first time on January 24, 1970 and produced until 1981. The prototypes are categorized into model series A and B, while series C, built in small numbers, was given to musicians for testing. The model series D was finally sold. Thus, all of the Minimoogs that can be found outside of museums today are model D. Over the eleven years of production, various changes were made to the electronics and the controls.

The successor to the Minimoog is the Moog Minimoog Voyager . This does not have the same sound, but is equipped with 896 sound memories (initially only 128 memory locations).

Today there are some computer programs and digital synthesizers that try to digitally emulate the Minimoog . Whether this has been successful so far is repeatedly discussed in forums and magazines. Well-known instruments (software and hardware) are Creamware Minimax (ASB and Scope plug-in) and Arturia Minimoog V.

Between May 2016 and summer 2017, the Minimoog was reissued by Moog Music with the same sound as possible (relative to the second revision of the original) and only minor innovations (MIDI as standard, keyboard not with voltage division, but via switching matrix, extended modulation options through additional LFO ) built. On June 28, 2018, the end of the new edition was announced.

The Minimoog was the first compact synthesizer . Synthesizers built up to then were large, modular systems, the individual modules of which were interconnected by external plug connections. The sound was significantly influenced by the plug connections. With the Minimoog, on the other hand, the order and arrangement of the assemblies such as oscillators , filters , attenuators and envelope generators are fixed and cannot be changed. You cannot save the settings either, but instead use a paper template, a reduced image of the user interface or normal paper to record the position of the controller, which - together with the instability of the electronics - naturally leads to one being found once Can never restore sound exactly.

The Minimoog works with three analog voltage-controlled oscillators for different waveforms, whereby one of the oscillators is often used as an LFO (Low Frequency Oscillator) for vibrato or periodic sound changes. It also has a noise generator for white noise (such as radio noise) and pink noise (sounding stronger in the bass; resembles a waterfall). The signals are mixed together with any additional externally connected signals ("External") in the mixer ("Mixer") and then pass through the famous and patented Moog low-pass filter with adjustable resonance ("Emphasis"). This filter has a slope of 24 dB per octave and is often copied because of its good sound and the slight desired sound distortion. A downstream voltage-controlled amplifier is responsible for dynamic changes in volume. There is a three-part ADS envelope for the filter and amplifier , for the filter cutoff frequency and volume curve .

In the early days, the Minimoog had the uncomfortable property of getting out of tune, as the exponential converters were not temperature-stable. As with an acoustic instrument, you had to tune the oscillators more often. This also applies to the instruments still in use today. The fine adjustment of the individual oscillators can be done from behind through small openings using a small adjusting screwdriver. There have been some changes introduced over the 10 years of series production to improve and reduce costs. The most important improvement was the significantly better tuning stability against temperature fluctuations from serial number 10175, recognizable by the three trimmer holes per oscillator on the back of the control unit. Many Minimoog owners had this improved tuning stability built into their Minimoog after they were introduced. To do this, the oscillator boards were replaced. For years there has been an opinion among connoisseurs that the older Minimoog supposedly sound better and fuller. However, these older models are built from many components that are no longer available and therefore cannot be replaced in the event of a repair.

The Minimoog can be played via the built-in keyboard or externally voltage-controlled (1V / octave, but with 0V = F). At the time of its presentation, in addition to the clear layout of the signal and control voltage curve from left to right, the two playing aids in the form of thumbwheels on the left of the keyboard for pitch and modulation, which are usually with The thumb or index finger of the left hand can be operated with the right on the keys when playing. With the left pitch wheel the pitch can be changed variably up or down. In the middle, the zero position, the pitch is unchanged. The right modulation wheel controls the strength of the modulation of the pitch and / or the filter frequency by the third oscillator or the so-called red noise (noise with a significant reduction in the higher frequency components). These playing aids for expressive playing (cf. organ ) have been adopted by most synthesizers in position, shape and diameter since the introduction of the Minimoog and are now more or less a standard. Due to its low-pass filter with 24 dB / octave, the sound of the Minimoog is rich and powerful, especially in the bass range. Its sound is still regarded today as a reference against which even modern synthesizers have to be measured.

The first Minimoog set of jazz - composer and bandleader Sun Ra one. He was lent a prototype in 1969 : "We lent him one and Sun Ra's art is that you don't expect to see it again."

The Minimoog was very popular from the 1970s and was and is still used by numerous musicians, including: 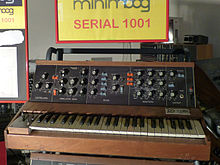 The first Minimoog D in the EBOARDMUSEUM

The world's first Minimoog of the D model series with the serial number 1001 is open to the public and can be viewed and played on in the Eboard Museum in Klagenfurt am Wörthersee.