In electrical engineering, network analysis is the procedure for calculating all currents and voltages in a network (see picture) from the known values ​​of the switching elements and the specified source variables. By hand and with analytical methods, only linear systems can be examined with realistic effort. Computer-aided circuit simulation, on the other hand, is mainly based on iterative approximation methods , requires a large number of calculation steps, but can also deal with non-linear components.

In a network, the relationships between all currents and all voltages that occur are described by the kirchhoff rules named after the German physicist Gustav Robert Kirchhoff . The relationship between current and voltage is described by Ohm's law , which describes the component equation of resistors . Real linear switching elements are required, i.e. H. no capacitive or inductive component and a linear characteristic in contrast to z. B. to the diode .

In the case of non-real resistances , the so-called complex calculation is necessary. In this way, an analysis for alternating voltage can also be carried out, with each observed frequency having to be calculated individually.

So that a network analysis is possible, nodes, branches and meshes are defined in the network. With the help of the Kirchhoff rules and the current-voltage relationships of the two-pole equations can then be assigned to them. In order for the mathematical systems of equations to lead to a unique solution, the respective equations must be independent of one another.

Node 1 of the network

A junction is a point in the network at which a flow branch occurs. If a network has nodes, then there are all in all independent node equations. One of these is in the example shown

Branch 1 of the network

A branch is the connection of two nodes by two-pole elements . If the network has branches, then there are also independent branch equations as a whole .

In the example shown, the branch equations after utilizing the component equations are:

A (complete) tree is a framework of branches that connects all nodes, whereby no node may be touched twice. In clear terms, the structure formed must not offer any opportunities to go in circles. Different variants are possible for the tree. Overall, in a completely meshed network (every node has a branch to every other node), variants are conceivable. In the present example there are three different trees, since more than one branch connects two nodes with one another.

The individual branches in the tree are called tree branches or branches . Because of the structure of the tree there are branches.

All branches that do not belong to the tree are called tendons or connecting branches . Their number corresponds to the number of independent mesh equations that can be set up with the help of the mesh set. 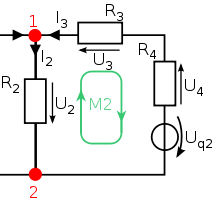 Mesh 2 of the network

A mesh is a circle closed by branches. For a simple analysis, a circuit should always be chosen over only one tendon or one connecting branch. This path is used for the continuation.

The direction of rotation of the independent meshes can be determined arbitrarily, but is relevant for later calculations.

In the example, the following two loops are selected.

For the solution by means of branch flow analysis, all independent nodal equations and the independent mesh equations are set up. Then these are sorted by lining them up by current / resistance on one side of the equation and voltages on the other. The result is a linear system of equations.

In matrix notation the system of equations is now:

There are standard methods that can be used for solving the linear system of equations . Smaller systems of equations can be solved analytically "by hand", for larger circuits numerical methods (computer programs) are used.

Overlay method according to Helmholtz

Result: The partial flow sought has been determined.

With increasing complexity, the effort for calculating the network with branch flow analysis increases. The computational effort is reduced by the mesh flow method (also known as loop analysis).

Meshes drawn in the tree diagram

As with the mesh flow method, the node potential method results in a reduced system of linear equations. 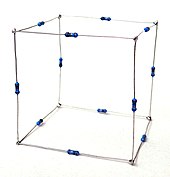 Resistance cube made up of twelve equal resistances

One problem in network analysis is the so-called resistance cube , which is formed by twelve equal ohmic resistors soldered together in the shape of a cube . For this construction, the total resistance is to be determined over the room diagonal A'C.

The problem can be simplified by considerations of symmetry. The resistor cube is built with twelve equal resistors and is therefore also electrically symmetrical (3-fold rotational symmetry around the spatial diagonal as the axis). Due to the symmetry when a voltage is applied, currents of the same size also flow through the three resistors connected to one another at one corner (only at the corners on the room diagonal). The ends of these three resistors facing away from the corner under consideration are therefore also at the same potential as one another. If points of the same potential, equipotential points, are connected to one another in a conductive manner, no current flows through these connections in the absence of a voltage between them. It follows that these additional connections do not change the circuit. It can also be seen that the same current must flow through the resistors because the same voltage is dropped across them. For example, when determining the total resistance over the corners of the room diagonals (in the graphic, the corners A 'and C), two times three points of equal potential (in the graphic, the points A, B', D 'and B, C', D) that can be connected to each other without causing an electrical change. After making these connections, the clear series connection of a parallel connection of three resistors with a parallel connection of six resistors and a parallel connection of three resistors results .