Peter Speeth was the eldest of five children of Wilhelmine Speeth, née Areans, and the Electoral Palatinate court trumpeter Nikolaus Speeth (1740–1784), who came to Munich in 1778 with the Elector Karl Theodor . Brothers were the priest and art writer Balthasar Spe (e) th , the Franconian wine merchant and merchant Johann Nepomuk Speeth (1780–1834), whose daughter Mathilde (* November 8, 1821; † August 13, 1915) later published under the pseudonym Siona books with Karl Panizza , the father of the writer Oskar Panizza since April 17, 1844, and the royal Württemberg lieutenant colonel Valentin von Speeth (1778–1845), father-in-law Eduard Mörikes . He also had a sister. After the family moved to Munich, Peter Speeth received his first education from his maternal grandfather in Schwetzingen , a native of the Netherlands from Haarlem . In 1781 his parents brought him to Munich, where his father let him familiarize himself with the fine arts and related sciences.

on the left the Palais Mumm in the Frankfurt Zeil

After the early death of his father, his uncle Georg Weber, who worked in building management in Heidelberg , brought him to live with him and taught the twelve-year-old Speeth in architectural drawing and building art. When Georg Weber was called to Frankfurt am Main to take over the execution of the Schweitzer's Palais in the Zeil designed by Nicolas de Pigage for the silk merchant Franz Maria Schweitzer (built 1788–1794), he caught up with 14-year-old Speeth to be able to impart practical knowledge and skills to them. De Pigage recognized Speeth's talent and hired him as a draftsman. At the age of 19 de Pigage entrusted him with the execution of the Schmidschen house for the merchant Johann Friedrich Schmidt in the Zeil , which became better known as Palais Mumm after its later owner Daniel Heinrich Mumm von Schwarzenstein (built 1791-1793). The success of the young Speeth led to the jealousy of his uncle and from 1794 Speeth worked independently, but gratefully continued to accept offers of support from his uncle.

From 1797 Speeth worked in Heidelberg, where he drew several building plans, including for buildings in Swabia and Saxony , which were not implemented due to the war. Since the building inspector at the time was not available, Speeth was also commissioned with the plans for the redesign of the destroyed Mannheim fortifications based on the designs by Friedrich Ludwig Sckell . Here, too, there was no construction work. Due to the reputation he had acquired, the abbess of Engelthal Monastery in Wetterau, Hesse , brought him in and commissioned Speeth to plan the hospital that was destroyed by the Prussian army in the war. Due to the secularization in Bavaria , construction was not carried out in 1803. Speeth then devoted himself to perspective and landscape drawing. From 1804 he worked for Carl Friedrich Wilhelm , Prince of Leiningen in Amorbach , and gave his wife lessons in landscape drawing. 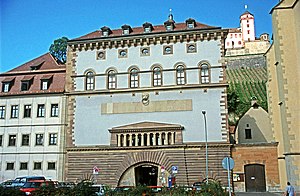 Theodor von Kretschmann met him in Amorbach, who had acquired Gut Obertheres in 1807 during the secularization , and brought Speeth to Lower Franconia to redesign the property , where he settled in Würzburg in 1807 and on the recommendation of Nicolas Alexandre Salins de Montfort , whom he knew from Frankfurt was placed in the service of Ferdinand III., Grand Duke of Würzburg . In Würzburg, where he worked as a draftsman at the court building department, he also taught at the craftsmen's drawing school. He designed the women's penitentiary (1809/10), an early and remarkable neo-renaissance building, and the Zeller Torhaus (1814), which bears similarities to Claude-Nicolas Ledoux 's barrières for Paris, and the bailiff's house (1811/13). His employment with the Grand Duke ended in 1815.

Count Kotschubei , to whom the plans for the imposing Würzburg prison building were presented, recommended Speeth to Tsar Alexander I and also to the Odessa-based governor-general Mikhail Semjonowitsch Voronzow , whereupon Speeth went to Russia in 1826 , where he assumed the role of provincial architect for Bessarabia . He was commissioned to lead the construction of the cathedral in Kischenew , but died shortly after construction began. After initial plans, Avraam Melnikov (1784-1854) took over the execution.