The political system of Eritrea has officially been in a transition phase since 1997 and is a dictatorship .

The Republic of Eritrea is the last and only African country in which an officially established one-party system prevails and thus only one party is permitted. The political system of the former Italian colony continues to be shaped by the authoritarian leadership style of President Isayas Afewerki .

In the democracy index of The Economist magazine , Eritrea is listed among the 15 most undemocratic regimes and is therefore one of the most authoritarian regimes . In the Press Freedom Index of the organization Reporters Without Borders , which assesses the respective situation of press and media freedom in the world, Eritrea is in last place and therefore disregards press freedom even more than North Korea (penultimate place), Turkmenistan and Iran . 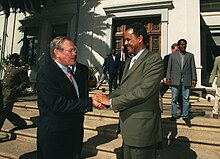 Eritrea was under Turkish rule for a long time (from 1554 as Habeş Eyaleti ) part of the Ottoman monarchy and was under the control of the Turkish sultan.

From 1881 the Italians settled on the coastal areas and proclaimed the colony of Eritrea in 1890 . Eritrea was thus part of the Italian colonial empire (which also included Italian Libya , Italian Somaliland and Italian Jubaland ) within the Kingdom of Italy and was ruled by Italian governors. From the 1920s, Eritrea was also under the rule of the Partito Nazionale Fascista , the Italian fascist party PNF led by Prime Minister Benito Mussolini . Racist laws were passed against the local population. However, the infrastructure was also built and the country was gradually modernized.

In 1935 the country was united with the occupied Empire of Ethiopia and Somalia to form the colonial territory of Italian East Africa and Eritrea was annexed to the Tigray territories in Ethiopia. During the Second World War, however, in April 1941, the country was liberated and in 1950 the United Nations granted Ethiopia as an autonomous region with its own government and parliament.

From 1952, however, Eritrea was gradually annexed by the Ethiopian Empire, and its autonomy gradually lifted. In 1956, Amharic was introduced as the official language in Eritrea, in 1961 the independent parliament was closed and the federation was completely dissolved. In 1962, Eritrea was finally declared the 14th administrative province of Ethiopia. In 1961 independence movements were founded, the largest of which was the Eritrean Liberation Front . The Eritrean War of Independence began . In 1974 the province of Eritrea came under communist rule after the military overthrew the emperor. The government of the People's Democratic Republic of Ethiopia from 1987 onwards granted the province autonomy again.

The Eritrean constitution of May 23, 1997 is officially democratic. According to the Eritrean constitution, Eritrea is a presidential republic with a one-party system. Eritrea is thus one of the few countries in which a single party still exists, after this state leadership was initially preferred in almost every country during the phase of the independence movement in Africa (see also: one-party system ) .

The 1997 constitution of Eritrea has not yet come into force.

There is no state separation of powers. Eritrea is a central state that is divided into six regions.

The head of state is the president, who has extensive powers and is elected for 5 years with a maximum of 2 terms of office. However, since the constitution has not come into force, the previous President Isayas Afewerki has governed without interruption since 1993. All major decisions are made by the President, who is also the chairman of the Unity Party : He is chairman of the legislature, head of government, commander in chief of the armed forces and appoints the members of the government cabinet. He has no representative, so there is no vice-president. Isayas Afewerki thus combines the office of head of state and head of government.

Until free elections are held, there is a transitional parliament (the so-called National Assembly established in 1993 ) with 150 deputies, 75 of whom are automatically members of the Central Council of the Popular Front for Democracy and Justice (emerged in 1994 from the Eritrean People's Liberation Front ) and the remaining 75 people's representatives People are elected. 60 of these 75 representatives of the people must be for representatives of the regional parliaments and 15 for representatives of Eritreans living abroad. Of the remaining 75 representatives, eleven women and 15 emigrants are reserved. The National Assembly elects the President, takes care of the budget, issues ordinances and laws and then ensures compliance. Parliament only meets on the orders of the President; It last met in 2001, and work has not commenced since then. The draft for the electoral law provides for a mandatory quota of 30 percent women among MPs.

The only legal party is the African Socialist and Eritrean Nationalist Popular Front for Democracy and Justice . According to observers, the question arises as to whether the Popular Front for Democracy and Justice has the status of a political party at all or whether Eritrea is a country that is in a transition phase from an economy based on central planning to a market economy Social order; from the official side, however, it is confirmed that they are campaigning for a party law. There are opposition parties, but they are illegal and are not allowed to run in the elections. The opposition organizations are united in the Alliance of Eritrean National Forces (AENF). these include:

The judicial system of Eritrea consists of the Supreme Court at the national level, the 10 provincial courts at the regional level and 29 district courts. At the village and commune level, there are still locally elected village judges who are usually appointed by the village elder. A municipal court consists of a total of three lawyers and magistrates. The judges of the municipalities usually decide according to local law and customary law . If a local court cannot resolve the dispute, the matter must be transferred to the next higher level of jurisdiction, the district courts.

With the Eritrean administrative reform of July 15, 1996, the number of provinces was reduced to a total of six:

Political systems of the states of Africa