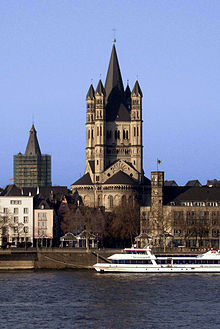 The Archdiocese of Cologne has existed since 313 , first as a diocese , and then as an archdiocese since Charlemagne . Until 1802 the archbishopric was one of the spiritual territories of the Holy Roman Empire of the German Nation . The archbishop was also one of the electors .

Therefore, the Catholic Church has always had a special role in the history of the city of Cologne. In 1288 Cologne became a free imperial city and was no longer part of the electorate. In 1525 the seat of the electorate was moved to Bonn . The Reformation could not gain a foothold, although there were Reformation tendencies in different areas of the electorate. In contrast to the Archdiocese of Cologne, Protestants could not hold a public service within the city of Cologne until the French invaded in 1794. The city's Catholic parishes were initially part of the Archdeaconate of the Provost. In 1802 the Archdiocese of Cologne was initially abolished, the parishes then belonged to the Diocese of Aachen, but the Archdiocese was rebuilt in a different layout in 1821 and 1825. Cologne became the seat of an archbishop again and is therefore still the capital of one of the seven church provinces in Germany.

The parishes of the city form the "City Deanery Cologne". On January 1, 2017, the cardinal reorganized the deaneries in the archdiocese. The previous city and district deans are now the deans of the archbishopric - provided for in church law. The dean's offices in Cologne-Mitte, Dünnwald, Ehrenfeld, Lindenthal, Mülheim, Nippes, Porz, Rodenkirchen and Worringen were thus dissolved. The more than 300 churches, monasteries and monasteries, as well as the famous Mülheim costumes on Corpus Christi , bear witness to popular piety in Cologne. In addition to various museums, the Catholic Church in Cologne runs numerous schools and social institutions. A wide variety of concerts, exhibitions and training opportunities enrich Cologne's cultural life considerably.

In Cologne there are the religious orders of the Dominicans , Franciscan Minorites , the Cologne Alexians , the Jesuits , the Redemptorists , the Salesians of Don Bosco , the Ursulines , the Carmelites , the Vincentians , the Schoenstatt Sisters and the Cellites .

In the Middle Ages, almost all of the orders in existence at the time were represented with their own branches in the important city, diocese and university town. The Franciscans and Dominicans in particular were heavily involved in the university at the time.

Protestant movements were strongly suppressed within the city of Cologne. In 1520 Martin Luther's writings were burned. In 1529 Peter von Fliesteden and the Bergische preacher Adolf Clarenbach were executed in the area of ​​today's Melatenfriedhof because of their Protestant beliefs. The Anabaptist community active in Cologne could only work underground. An exception was the term of office of the evangelically oriented Archbishop Hermann V. von Wied . For example, Menno Simons was able to work relatively freely in Cologne between 1544 and 1546. As early as 1566, however, the Anabaptist teacher Mathias Zerfaß was denounced, tortured and burned with the participation of many spectators. The martyr's song Many had pity still reminded of him today. In 1558 the Mennonite preacher Thomas von Imbroich was tortured and beheaded. Anabaptist-Mennonite congregations could not establish themselves in Cologne in the long run.

In the area of ​​the Reformed and Lutheran spectrum, however, four congregations were founded, which were later combined in the Evangelical Congregation Cologne : the Dutch Reformed (consistorial protocols received from 1571), the French Reformed (names of some preachers from the period from 1576 to 1605 known), the German Reformed (probably from 1572) and the German Lutheran congregation (verifiably from 1575). Some of the parishioners were given pastoral care by pastors from Mülheim . 1586–1587 Philipp Nicolai was secretly a Protestant pastor in Cologne. Official Protestant church services could only take place outside of the then urban area. From 1583, the city council even denied the Protestants burial within the city walls. This means that the oldest Protestant burial site is also located at the gates of what was then the city: After the Thirty Years' War, Protestant Christians were able to bury their deceased in the so-called Geusen cemetery, about 1.5 kilometers from the city wall, i.e. in the area of ​​the Electorate of Cologne. This cemetery was jointly bought, used and financed by Reformed and Lutherans.

Even when Emperor Joseph II granted the Protestants the privilege of building their “own Beth, school and preacher's house” in 1788, this was prevented by the Cologne Catholics. This did not change until the French revolutionary troops marched in in 1794. Currently - including the smaller Protestant free churches - almost 15% of Cologne's population are Protestant. 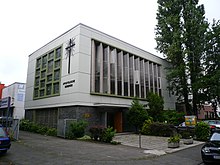 There are the following Protestant free churches in Cologne:

as well as other free congregations that do not belong to any association in Cologne.

With a mention in a Constantinian decree from the year 321, Cologne is considered to be "the oldest Jewish community north of the Alps". The existence of the first Jewish residential area in the area around today's Cologne City Hall is dated to late antiquity in the Roman city. Before the town hall also open to visitors after registration testifies mikveh , a Kultbad from the 12th century by a rain Jewish life in the city. In the Middle Ages there were pogroms , persecution and expulsions against the Jewish population in Cologne . It was triggered by the beginning of the crusades and the outbreak of the plague , the cause of which was believed to be found among the Jews (see plague pogrom ). As a result, many of the surviving Cologne Jews emigrated, some formed new communities in the nearby area on the right bank of the Rhine. Not until 1799 was there a Jewish community in Cologne for the first time under French occupation . This increased until the first half of the 20th century; In addition to the new synagogue in Glockengasse, synagogues, schools, baths and health facilities were built in numerous districts and suburbs. The Zionist Association for Germany , founded in Cologne by the lawyer Max Bodenheimer together with the businessman David Wolffsohn , had its headquarters near Neumarkt at the end of the 19th century . Business people like Leonhard Tietz or members of the Oppenheim family also settled their business activities in Cologne. By 1930 the Jewish community numbered 20,000 people and there were six synagogues in the city.

During the National Socialist era , many Jews from Cologne were deported to the Dachau concentration camp , many were mistreated, robbed of their property, and Jewish cemeteries desecrated. All synagogues were destroyed in the course of the Reichspogromnacht . Those who did not escape abroad or who did not commit suicide were eventually murdered (transported to an extermination camp). Very few (40-50) managed to survive in hiding. After the liberation, the synagogue on Roonstrasse became the new home of the Cologne synagogue community in 1959 . The synagogue and cultural center were inaugurated in the presence of Federal Chancellor Konrad Adenauers . As in other German cities, the Jewish community grew through immigration from the areas of the former Soviet Union in the 1990s. In 1996, in addition to the now Orthodox synagogue community, the small Jewish liberal community Gescher Lamassoret (Hebrew for: bridge to tradition) was founded. In 2004, the new Jewish welfare center was opened in the former Jewish asylum on Ottostraße in Cologne-Neuehrenfeld , which houses a Jewish primary school, an old people's home and the administration of the synagogue community, which has more than 5000 members.

According to the 2011 census figures for people with a migration background, around 119,300 (11.9%) were Muslims. Because of the high proportion of Muslim immigrants, especially from Turkey and their descendants, and because of the central location in the old Federal Republic, the most important Islamic organizations established their headquarters in Cologne and the surrounding area ( Kerpen ). According to press reports, around 120,000 Muslims (mainly immigrants) currently live in Cologne and there are a total of around 45 mosques. The representative central mosque in Cologne , officially opened in 2018 , is managed by DITIB . The Ahmadiyya Muslim Jamaat operates the Bait un-Nasir in Cologne-Niehl since 1985 an Islamic community center that was converted in 2011 after renovations and the construction of a minaret to a mosque.

A Hindu temple can be found in Cologne-Höhenhaus on Neurather Weg.

A Gurdwara (Sikh temple) can be found in Cologne-Buchforst, Kalk-Mülheimer Str. 299.

The Baha'i religion is also represented in Cologne. She regularly offers activities that are open to all religious members. The Baha'i community also has a space for their activities on Neusser Straße in Nippes.

At Cologne / Bonn Airport is a non-denominational cross Prayer room.

The Cologne Society for Christian-Jewish Cooperation is dedicated to the encounter and dialogue between Jews and Christians. The national Christian-Islamic Society , the largest and oldest Islamic-Christian dialogue organization in Germany, has its headquarters in Cologne . A “Council of Religions” was convened by the City of Cologne, made up of representatives of the various religious communities. Since the beginning of 2008, Cologne has also been the administrative headquarters of the Coordination Council for Christian-Islamic Dialogue (KCID).

The Inter-Religious Round Table of Cologne Mülheim (IRRT) has existed since 1998. It was brought into being as part of the “Keupstrasse Project” at that time by the City of Cologne, intercultural department and intercultural service Mülheim. The long-term goal is to bring as many religions represented in the Mülheim district as possible to one table. There are currently eleven religious communities represented: Center for Education and Integration in Mülheim e. V. (ZeBIt), Friends of the Center for Cultural Encounters (FZKB), Hacı-Bektaş-Veli-Cemhaus (Alevis), Jama'at-un Nur (Community of Light), Catholic Church, Evangelical Church, Free Evangelical Congregation Cologne-Mülheim, Evangelical Free Church Community Cologne-Mülheim (Baptists), Santi Dhamma Vihara Cologne-Buddhism Center e. V. (KBC), Soka Gakkai Internationale - Germany e. V. (SGI-D), Baha'i community Cologne.